Beyond the Boxscore: The Calgary Flames lose close match with Boston Bruins 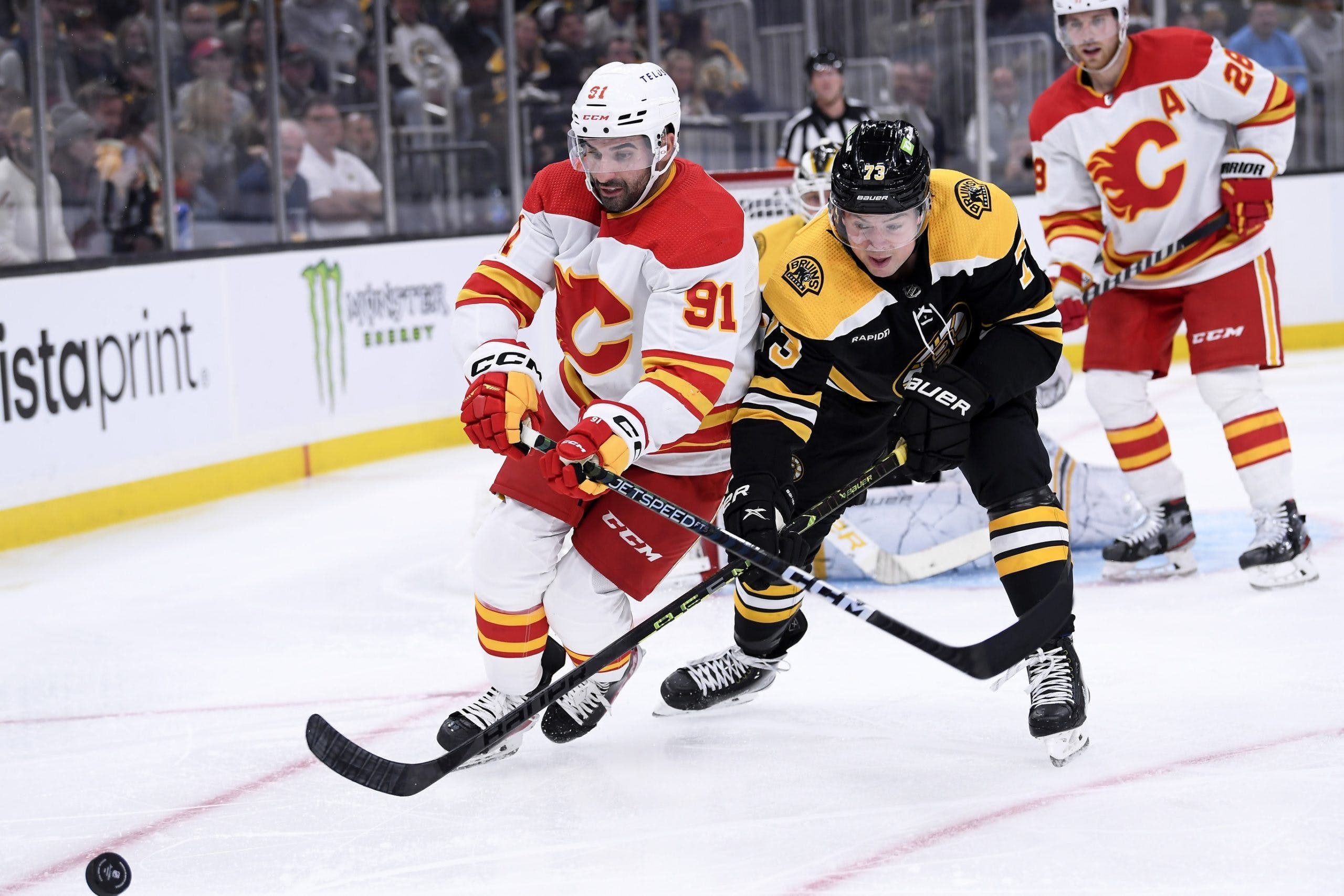 By Shane Stevenson
24 days ago
Another game and yet another loss for the Calgary Flames. The game was fairly back and forth with a lot of special teams play featured. Calgary was able to find more sustained pressure than the Bruins but could not get a goal past the Boston goaler. This marks the seventh straight loss as Calgary learns to sort out who they are and find a combination of players that can put the puck in the net regularly.
CF% – 65.86%, SCF% – 62.35%, HDCF% – 52.89%, xGF% – 50.63%
It’s a Team Game – The Flames didn’t dominate this game; they just had the puck more. The dangerous chances and overall quality at 5v5 were both within rounding range of 50. While the first three goals all register as 5v5 both Hanifin and McAvoy’s goals came directly at the end of power plays. Just the first Bruins goal was the only instance a goaltender truly got beat 5v5. A defensive battle of a game that was physical and entertaining.
Corsi King – Nikita Zadorov (83.37 CF%) has been quite the force for the Calgary Flames lately. This game against Boston he and MacKenzie Weegar (78.45%) dominated all the play on the ice. It’s easily been the most consistently positive trend on this entire losing streak – the play of that defensive pair. Mikael Backlund (75.50%) has been playing at a high, high level ever since he got sat on the bench. When Backlund is on he’s the best player on the ice – no, really. He may not get the offensive totals but he possesses the heck out of the puck, just never gives it up.
Corsi Clown – There was nobody below 50% and the Flames lost. You’ll see why when you look at expected goal differentials and scoring chance totals. This is a positive sign – but it comes with a major asterisk with the amount of time 5v5 was broken up by special teams.
Under Pressure – 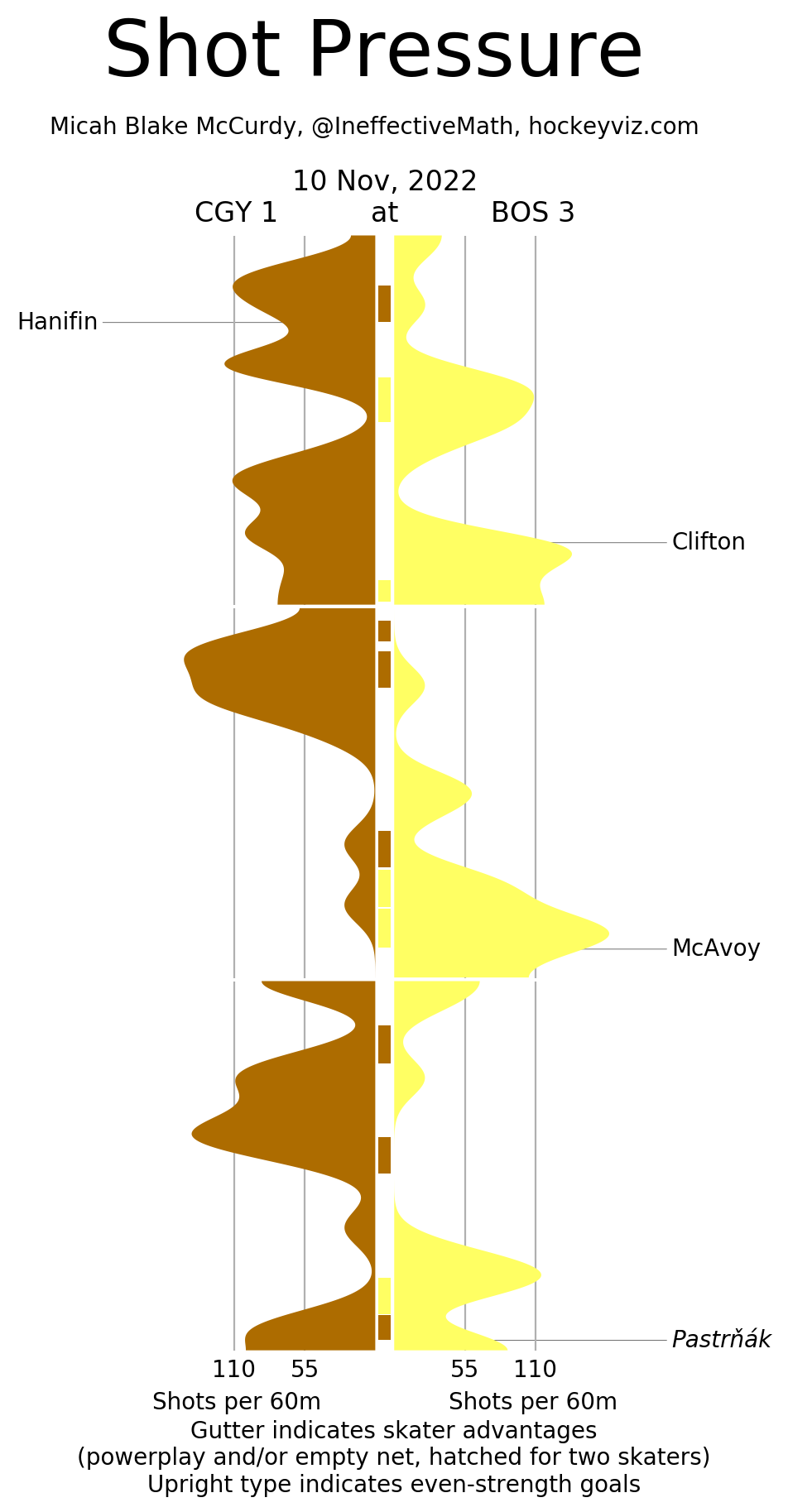 Taken By Chance – We’ll start with the good – 5 forwards were able to keep the Bruins without a high danger chance against. Elias Lindholm (74.83 SCF% // 100 HDCF%), Adam Ružička (74.83% // 100%), Tyler Toffoli (60.42% // 100%), Mikael Backlund (100% // 100%), and Andrew Mangiapane (100% // 100%). Ružička has played very well filling in at Huberdeau’s position. If this strong play continues the points will start to pile up. He’s meshed really well with Lindholm. Mangiapane and Backlund might be the single best combination they have, even better than the reliability of Backlund and Coleman together. They desperately need Mangiapane to find his groove if they want to win games, getting him going with the old reliable option might work.
xG Breakdown – 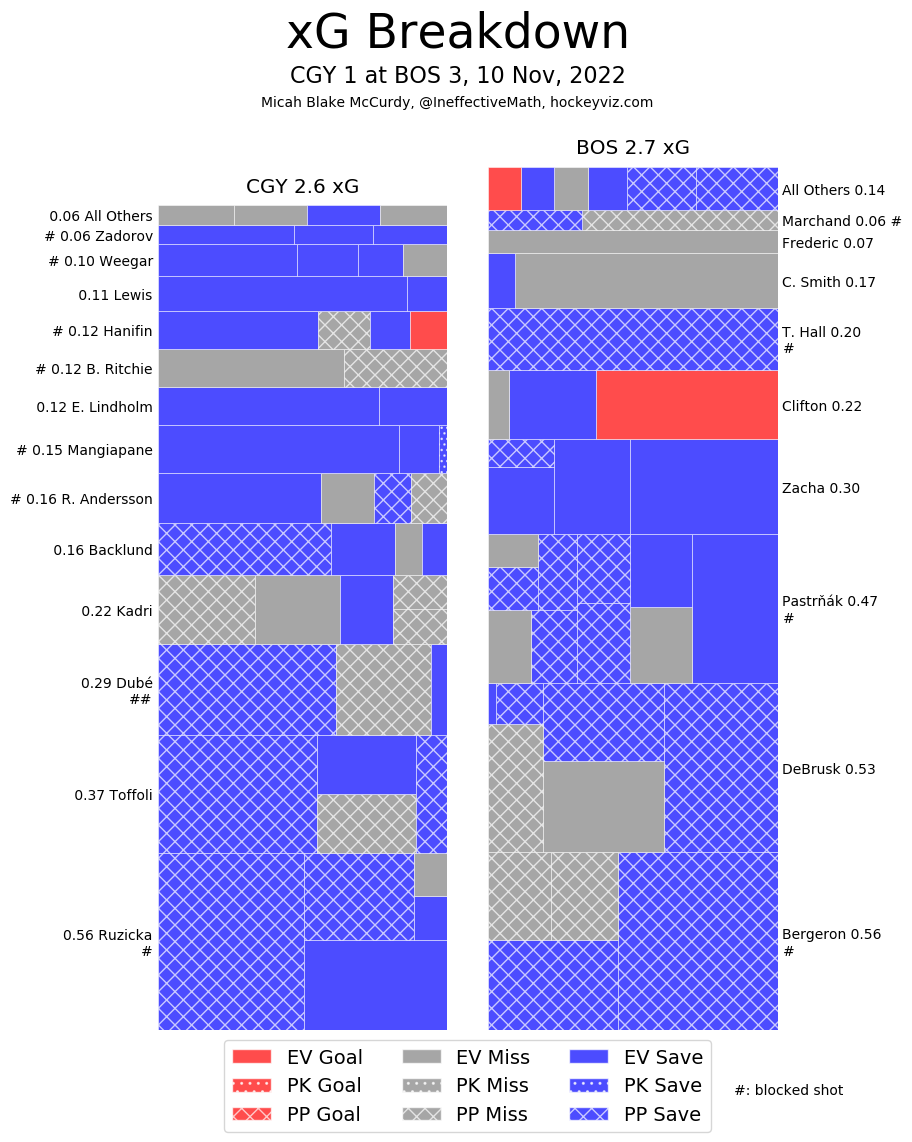 xGF% – While Zadorov (93.52%) and Weegar (93.24%) continue to rise to the occasion, the pairing of Andersson (19.26%) and Hanifin (20.36%) have been struggling. They do face the hardest competition regularly but running sub 40% on quality of shots consistently isn’t great. Now the problem can’t be fixed by pointing at numbers on a spreadsheet and saying “fix this” – that would be beyond ridiculous. No some serious watching of the pairs defensive zone time, puck retrievals, and breakout procedures need to be re-watched to see if there’s anything that can be done to spark this pair back to where they were last season. I have faith in these two to come through – they have every other year they’ve played together.
Game Flow – 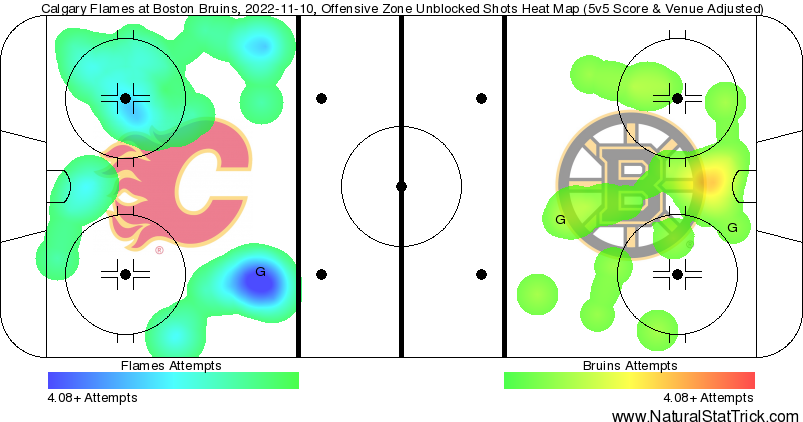 In The Crease – Sometimes the numbers can be cruel especially when it comes to classification of shots. McAvoy getting what is technically a 5v5 goal just as the power play ends stings, then its classified as low danger making it sting worse. Vladar did make 15 saves on the penalty kill tonight stopping a very lethal Bruins top unit from racking up their point totals. I wasn’t upset by anything in Vladar’s game – he gave the Flames a chance to win with his play, they didn’t bring the offence to get the victory.
Player Spotlight – Dillon Dubé – It shouldn’t be possible to go from looking like the most dangerous player every shift one game to hardly noticeable the next. It happens as players come along and learn the NHL ropes, but with 200 games of experience you’d expect it to come along more frequently. The secondary scoring on this team right now is terrible – Dubé has every single tool to be the one to help this team crawl back into playoff contention. Whether we see it maximized every night is what the fans are waiting for.
The Goals –
Flashalytic’s 3 Stars –
1) Nikita Zadorov
2) Mikael Backlund
3) MacKenzie Weegar
The Flames’ next game is Saturday night on Hockey Night in Canada – 8 p.m. MT against the Winnipeg Jets.
(Stats compiled from Naturalstattrick.com // Game Score from Hockeystatcards.com // xG and Under Pressure charts from HockeyViz.com // Game Flow and Shot Heatmap from NaturalStatTrick.com)
Editorials
Recent articles from Shane Stevenson