Beyond the Boxscore: The Calgary Flames play Game 82 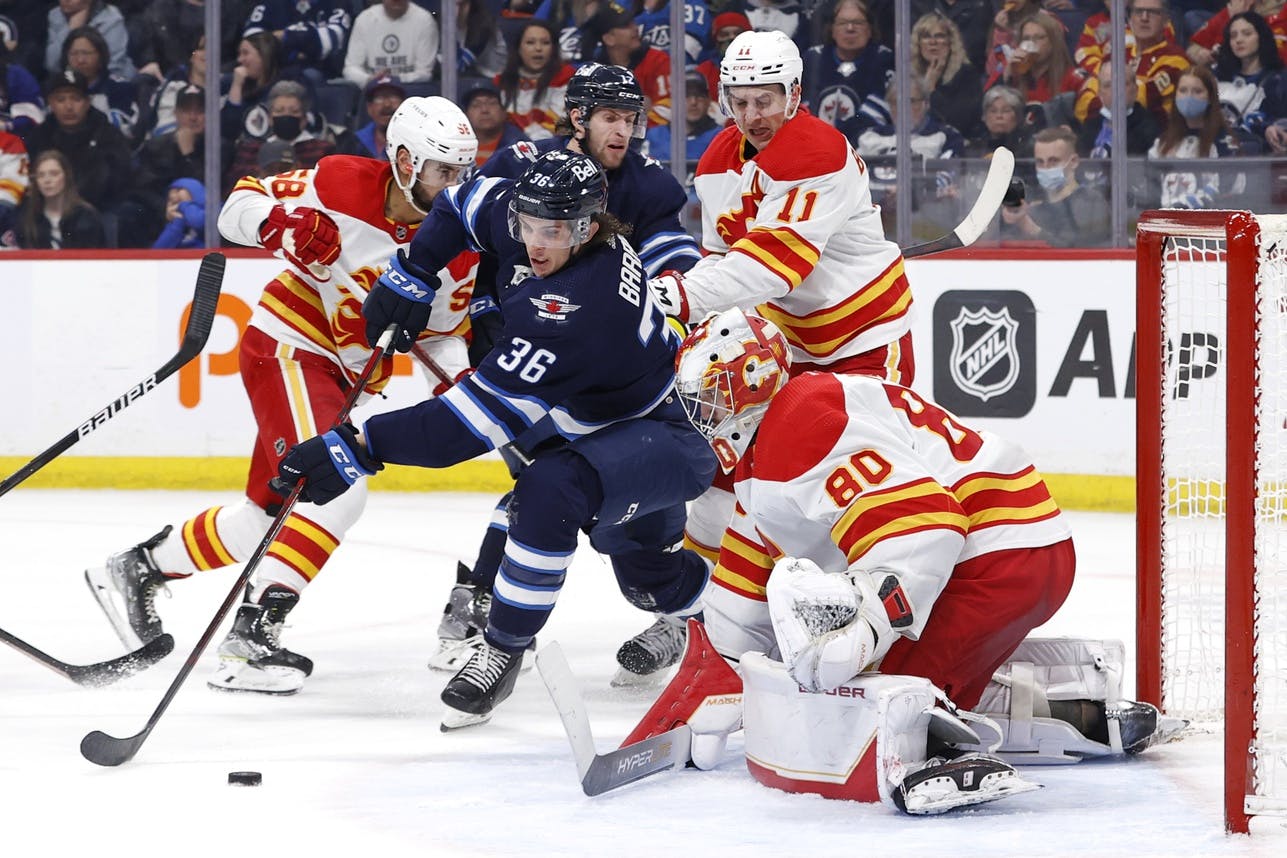 By Shane Stevenson
9 months ago
Game 82 sometimes has the potential to be a great event – this year for Calgary it was anything but that. The first period saw Calgary come out and be the better team but as the game wore on Winnipeg just started throwing everything at Dan Vladar. Not everything hit the net, but they sure tried a lot of different shot angles to try and score. After the second PK by Calgary, they seemed to check out – bigger fish to fry coming on Tuesday.
CF% – 42.54%, SCF% – 32.41%, HDCF% – 33.38%, xGF% – 37.45%
It’s a Team Game – Now checking out isn’t necessarily a great thing, but with how the Flames played Games 1 through 81 I don’t have any issues. Nobody got injured or suspended so the Flames can start game one of the post-season with their ideal lineup. Was this particular game a good one? No it really was not – but it had been a long time without a stinker for a game and based on the circumstances it’s understandable.
Corsi King – Rasmus Andersson (61.48 CF%) did not fall victim to the Jets barrage – maintain his usual raw contribution totals while playing against quality competition. Michael Stone (60.38%) has been good in spot starts all season and should be geared up should they need him later. Andrew Mangiapane (53.50%) was the only forward to win the overall chance battle as the Jets really came on strong in the second period.
Corsi Clown – Chris Tanev (10.54%) spent pretty much the entire night in his own zone. Oliver Kylington (27.21%) was pretty much right there with him. Tanev was a contributor to all the penalty kills as well. 5v5 though the Jets took that defensive pairing to the cleaners – as long as they recover for Dallas it will be fine.
Taken By Chance – Calle Jarnkrok (32.51 SCF% // 0 HDCF%) saw 4 high danger chances against while being involved in none himself. Chris Tanev (4.84% // 10.74%) saw 9 high danger chances against while he was on the ice. That’s just plain ridiculous – I’d be willing to guess that over his last 9 games combined he wouldn’t have as many as he did in this match. Only player that stood out really positively in terms of across the board numbers was Andrew Mangiapane (57.57% // 62.34%).
xGF% – One player not mentioned yet that found his way into a positive in this ratio was Blake Coleman (53.22 xGF%). In terms of offence the Flames struggled to create and in terms of defence… while they hardly played much successful defence in this match. Three days off before the first playoff match will ensure all these guys are ready to bounce back.
Game Flow –

The start of the 2nd period was the Flames downfall. They just couldn’t stop from Winnipeg from taking chances. The spike towards Calgary with 5 minutes in the second was the only majorly significant chance in the final 40 for Calgary.
Game Score – Dan Vladar (2.65 game // -0.19 average) was easily Calgary’s best player. Mangiapane (0.54 // 1.01) and Michael Stone (0.68 // 0.62) also were the Flames skaters that profiled the best. 7 different skaters finished at -1.00 or lower, see the website for more details on them – I’m not getting to critical due to the circumstances of this game.
Shot Heatmap – 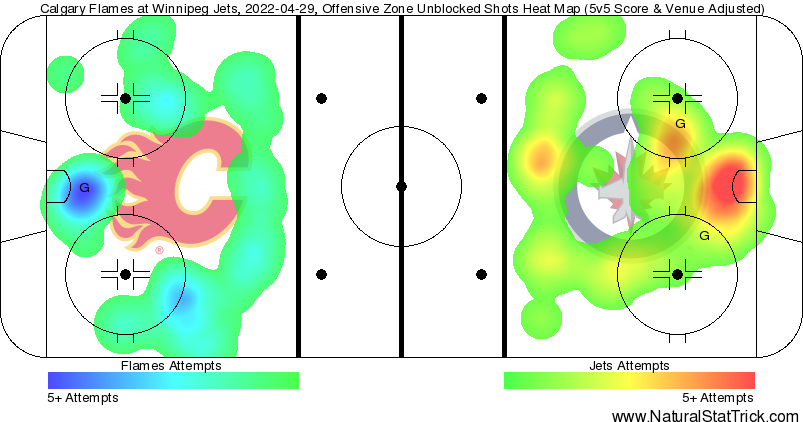 Calgary forewent any chances between the hashmarks and the point. Nobody was able to come down the royal road and get a quality shot off. The upper slot being that devoid of chances is a positive for the Flames. Game 82 – over and done.
In The Crease – One guy who worked his butt off all night for the Flames was Dan Vladar. He only had 2 5v5 goals against him on 3.31 expected goals against. Vladar saved 1.31 goals above expected which is fantastic. One goal against was classified high danger whole the other was mid danger. Vladar finishes with a 0.943 5v5 SV% – all being said a pretty great first season for the rookie netminder.
Today’s Specials – Calgary’s power play were able to get some quality looks on the Jets tonight, but alas it was empty handed on the final page. Winnipeg did just about everything they needed to do in order to win the hockey game. Markstrom will be back as well bolstering the PK unit further.
Flashalytic’s 3 Stars –
1) Dan Vladar
2) Andrew Mangiapane
3) Michael Stone
The Flames regular season is compete with a record of 50-21-11. Next up is Round 1 of the Stanley Cup playoffs against the Dallas Stars, beginning with Game 1 on Tuesday night starting at 8 p.m. MT.
(Stats compiled from Naturalstattrick.com // Game Score from Hockeystatcards.com)