Beyond the Boxscore: The Flames are clearly not as good as the Hurricanes By Shane Stevenson
1 month ago
Lets just start off by saying the Carolina Hurricanes are one darn good hockey club, they typically own possession and the high danger chance ratio every single night they play. Losing 3-2 to the Hurricanes is never bad on paper, but when you look how Calgary played there was still a lot left to be desired. An abysmal start even though both teams played yesterday had Calgary chasing early, something in major contrast to how often they scored first last season. The lack of scoring threats was on full display once again from the Flaming C as they continually just reshuffle the lineup instead of inserting some much-needed new blood. Last time they inserted youth into a prominent position they started winning again (Ružička with Lindholm), odd the reluctance to try that in other spots too.
CF% – 41.93%, SCF% – 34.74%, HDCF% – 34.62%, xGF% – 35.81%
It’s a Team Game – I’m not going to definitively say these are the worst metrics across the board in a game so far, but I will say they are certainly in the bottom two. Right up there with the game they played earlier this year against the… Canes? Only three games have seen the CF% be below 50% out of the 21 played – two of those are Carolina. I’m just going to say it: they are flat out a better team right now, it is as simple as that. Dan Vladar kept this game close, but Carolina deserved to win it from the moment it got underway. If you really want to find a positive in this, you can say Calgary did in fact improve on their performance against Carolina earlier in the year. (Cue sad trombone sounds)
Corsi King – Tyler Toffoli (63.34 CF%) and Elias Lindholm (61.81%) led the way for the Flames up front while once again Nikita Zadorov (53.11%) and MacKenzie Weegar (57.74%) lead the rearguards. Chris Tanev (53.09%) with a big bounce-back game in possession after struggling the previous night. Actually day – I write these reviews at night but these were afternoon games, very unorthodox for Calgary to try and prep for these as well. Now I’m just making excuses for them, I think I’ll stop.
Corsi Clown – Milan Lucic (16.81%) and the Flames fourth line continues to be a problem. I used to say the fourth line can’t lose you the game, but the Flames don’t exactly use them as a fourth line… except for tonight. Less than 7 minutes of 5v5 ice time for Lucic, Ritchie (19.41%) and Lewis (24.99%). More on them in chances against, but here I’ll talk about Calgary’s philosophy of rolling lines. If you’re a team with last change you are just salivating at the possibility of Calgary sending out their bottom forward grouping because it’s not hard to match them up against your best players. As such they get out-skated, out-possessed, out-chanced and out-scored. We talk about the Flames putting their defence in the right spot to succeed (Zadorov/Gudbranson getting fed offensive zone starts last year) so why aren’t we putting these slower footed veterans in spots to succeed? A question for someone in a more prominent position.
Under Pressure – 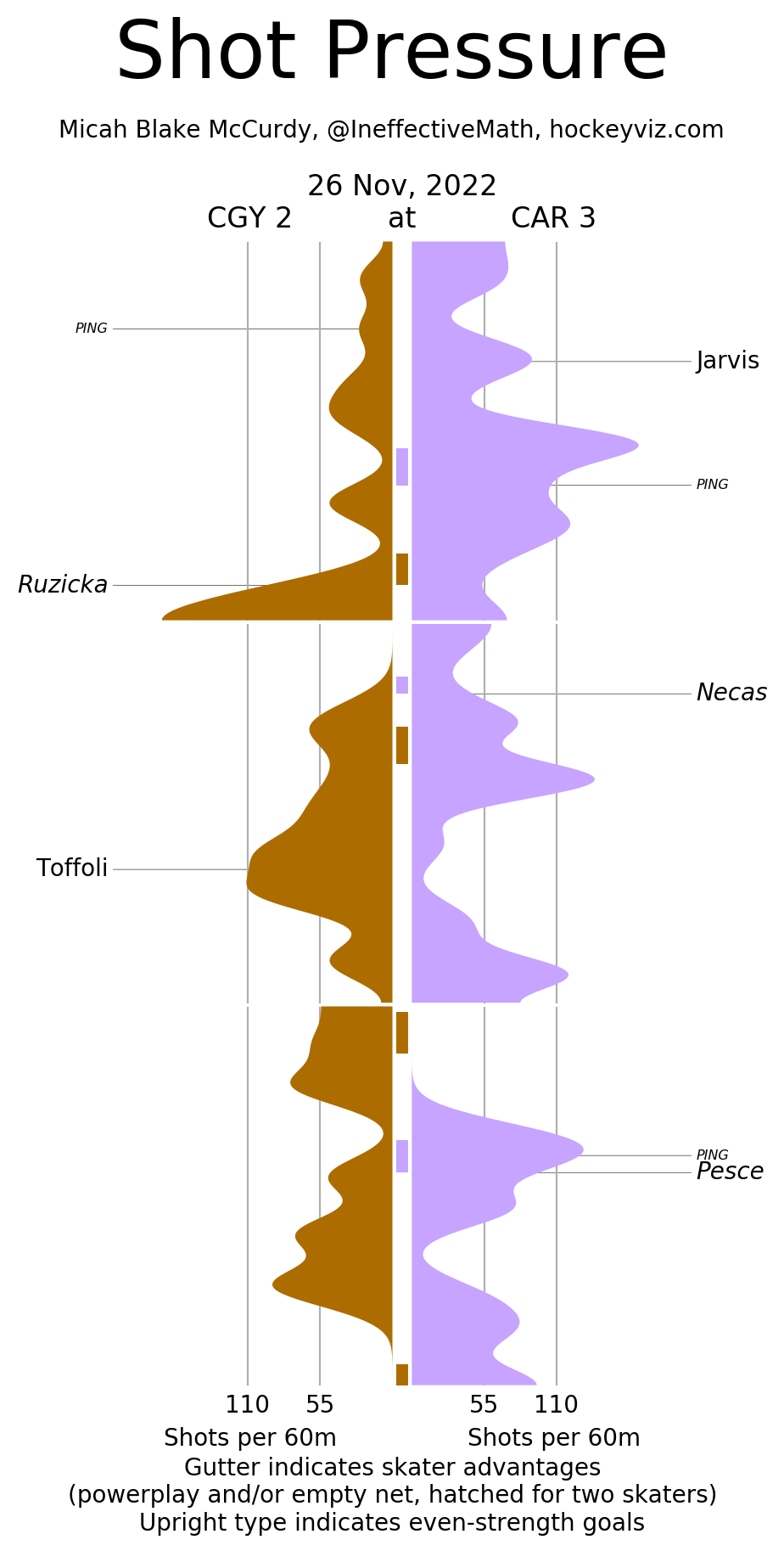 Taken By Chance – Can someone explain to me (this is rhetorical for what its worth) how 5 high danger chances can come against a line of forwards in 6:40 of ice time. That kind of performance – which some of these players have put up constantly for weeks now – would get a fringe player sent back down to the minors. Instead, the Veterans get to lace them up every game without repercussion. At some point I’m going to start speculating whether ownership is going to even let the Flames sit players with significant cap hits in the press box. Do I know anything about that – absolutely not. Can I still speculate – you bet. Andersson (27.13 SCF% // 11.32 HDCF%) and Hanifin (10.81% // 11.32%) ended this road trip in abysmal fashion. Hanifin – Tanev seems almost necessary as a pairing with how Rasmus and Noah have struggled. You can’t let 8 high danger chances in a game as a pair, that is never acceptable no matter how skilled the opponent is.
xG Breakdown – 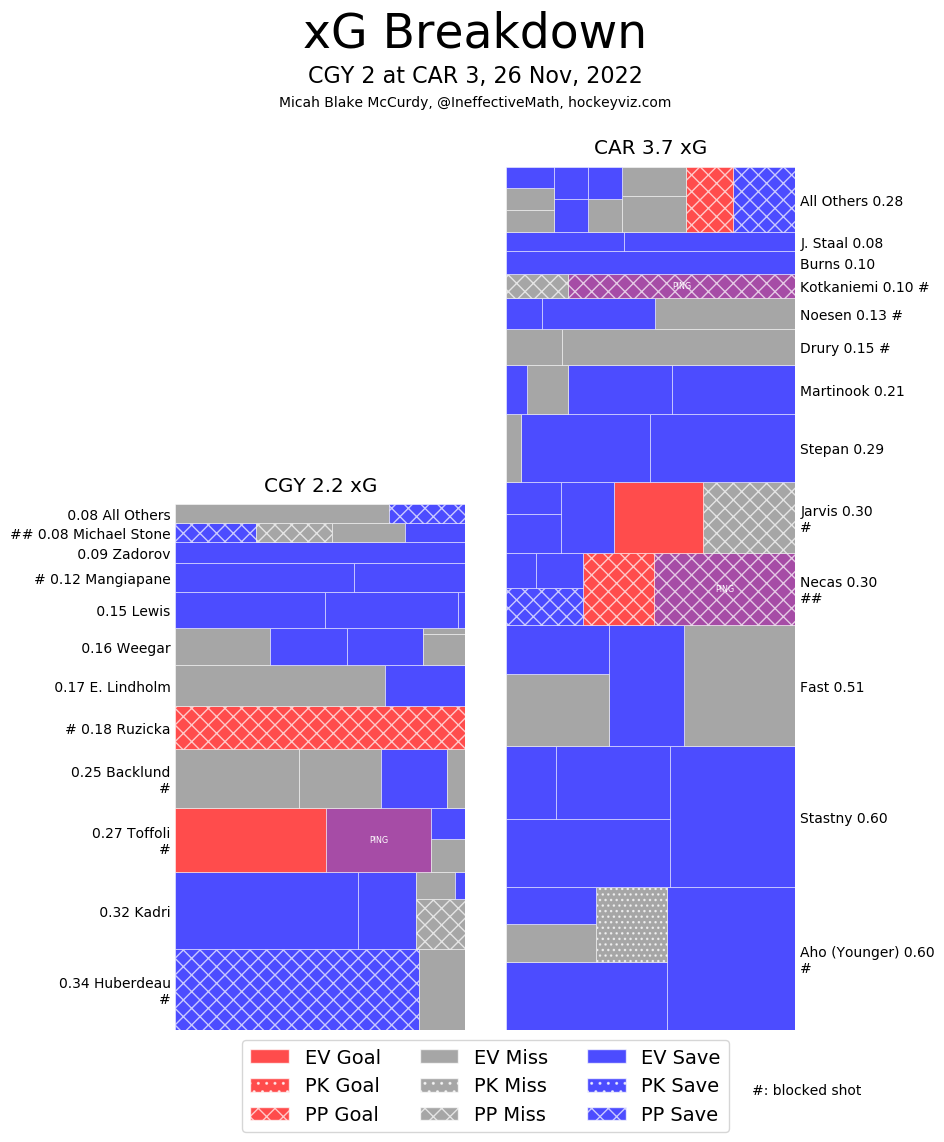 xGF% – Jonathan Huberdeau (75.53%) is right up there with Zadorov (58.94%), Weegar (50.81%), and Backlund (71.92%) as the Flames most consistent performers of the last 3 weeks. It is also officially time to start asking more from Nazem Kadri (29.91%). 7 million reasons why he should never disappear from a hockey game and yet he’s fallen off the face of the earth when it comes to impacting hockey games. Please note where you’ve seen him on the ice in a significant scoring chance since this road trip started, because I sure can’t. Might change that lines name from Buzzsaw Boys to the Houdini Boys because you can hardly find them on the boxscore anymore – have vanished almost completely. Kadri specifically is pointless in 5 straight, and yet still sits second in team scoring behind Lindholm (45.14%)
Game Flow – 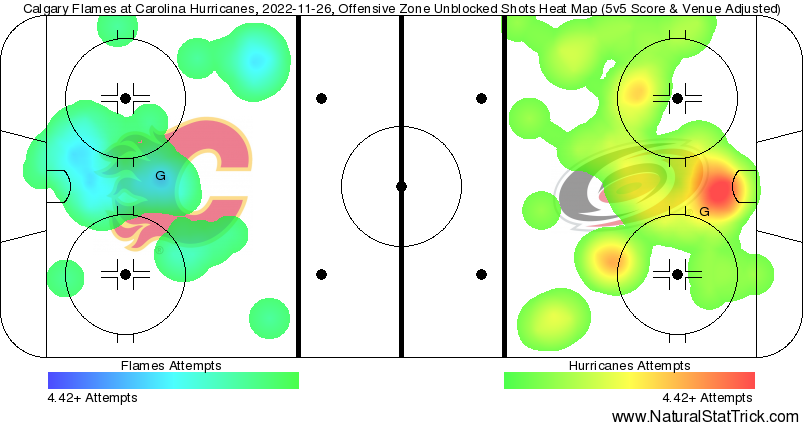 In The Crease – 2.74 expected goals against at 5v5 with only one goal getting by Vladar – the other two came on power plays. One high danger goal against meaning no weak goals. Easily the Flames first star and as such should earn himself at least 2 starts on this 5 game homestand. Until Markstrom finds that $6 million form more of a rotation featuring Vladar starts could be welcomed.
Player Spotlight – Matthew Phillips – Did you know that he has 13 goals for the Wranglers this year? Do you know he has points in 14/17 games so far this year? Do you know that he’s not some fresh rookie he’s actually played professional hockey for 5 seasons now? If you didn’t now you do.
The Goals –
Flashalytic’s 3 Stars –
1) Dan Vladar
2) Zadorov/Weegar
3) Huberdeau
The Flames go 2-3-1 on their road trip, now they return home to play Matthew Tkachuk and the Florida Panthers on Tuesday night (a 7 p.m. MT start).
(Stats compiled from Naturalstattrick.com // Game Score from Hockeystatcards.com // xG and Under Pressure charts from HockeyViz.com // Game Flow and Shot Heatmap from NaturalStatTrick.com)
Editorials
Recent articles from Shane Stevenson