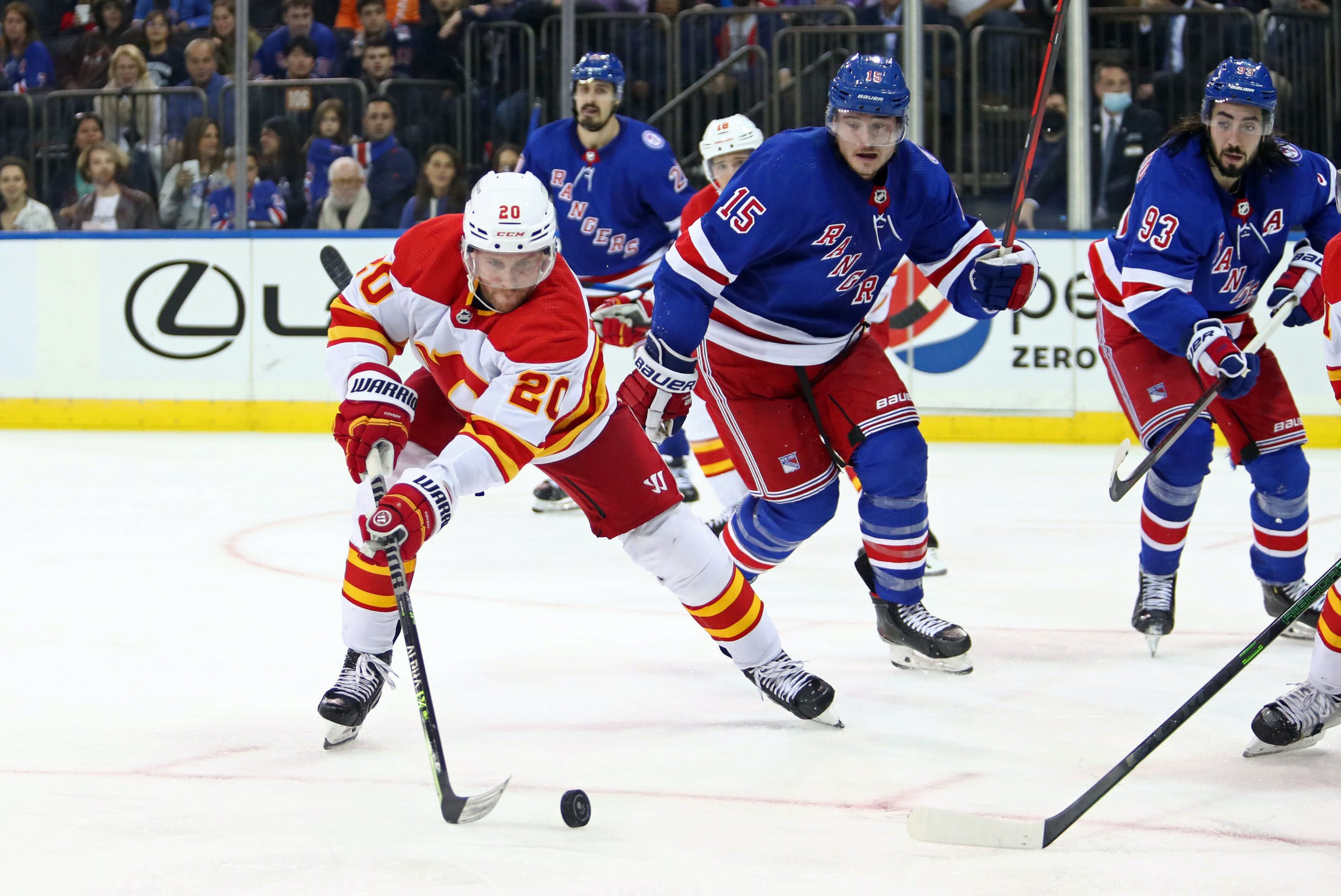 By Mike Gould
1 year ago
Calgary Flames fans have every right to be skeptical about the team’s expensive free agent signings.
Flames general manager Brad Treliving has spent much of his tenure searching for forwards capable of helping his team in a variety of different ways.
In @James Neal, he sought a sniper who could give his roster at least 20 more goals each year. With @Troy Brouwer, he wanted to add two-way proficiency, playoff experience, and sandpaper to a young team. He brought in @Mason Raymond to try and bring some respectability to a forward group that had just lost @Michael Cammalleri and @Lee Stempniak.
All three of these additions failed spectacularly. The Flames bought out both Brouwer and Raymond just two years into their respective contracts; Neal only spent one disastrous year in Calgary before being shipped off to Edmonton for @Milan Lucic.
That’s not to say Treliving has never found success when taking big swings. @Michael Frolik was an excellent two-way forward and a perfect complement to @Mikael Backlund for much of his five-year deal; @Derek Ryan was a delight to watch and an extremely positive influence in his three years as part of the Flames’ bottom six.
@Blake Coleman’s contract with the Flames is the longest one Treliving has ever given to a forward in unrestricted free agency. Coming off back-to-back Stanley Cup wins with the Tampa Bay Lightning and excellent two-way play as a top-six forward with the New Jersey Devils, Coleman certainly earned a payday.
Still, six years at a cap hit of $4.9 million is enough to give any Flames supporter déjà vu. For much of the summer, the question lingered in Calgary hockey circles: “Will Coleman be a Neal … or will be he be a Frolik?”
Maybe that was the wrong question to ask.
Frolik was undeniably a valuable part of a few Flames teams and a founding member of the “3M Line.” He was also strictly a complementary piece. Make no mistake: Backlund and @Matthew Tkachuk led that unit.
Coleman isn’t a supporting player by nature but, if called upon, he’s capable of being of the best in the league. He was cast as a third-liner on an extremely strong Tampa Bay team out of circumstance, not due to a lack of skill.
Looking back at his tenure with the Devils, Coleman was a top-six forward who scored 20 goals in back-to-back seasons. He brings toughness and doggedness, yes, but he’s also one of Calgary’s most skilled players with the puck. Remember when Coleman was a human highlight reel in New Jersey?
Remember when Coleman dove through the air to score critical goals for Tampa in back-to-back Stanley Cup runs?
Brouwer, in particular, was lauded for his “grit and compete” when the Flames signed him in 2016 to a four-year deal. He ended up as a seldom-used fourth-liner who only helped the team prevent events from occurring at both ends of the ice.
Coleman is every bit as tenacious as Brouwer — if not more — but has shown, time and again, to be capable of harnessing that fire into creating offence. He’s not the type to hit for the sake of hitting or to fight for the sake of fighting. He takes powerful strides and muscles past his opponents when he needs to create separation before a scoring chance. He’s that kind of energy player.
How many Flames players do you think are capable of making plays like this while their team is shorthanded?
The Rangers defenceman who Coleman sped past with apparent ease? That would be none other than reigning Norris Trophy winner @Adam Fox.
Coleman is an extremely fast player. He’s strong on the puck and takes a ton of shots (he peppered Rangers goaltender @Igor Shesterkin with eight on Monday). When he needs to be, he’s capable of being the most noticeable physical presence on the ice surface.
Best of all, he drives play. In Coleman’s small amount of 5-on-5 ice-time this season, the Flames have dominated their opponents. His +12.31 relative on-ice expected goals percentage ranks third-best on the team (according to Natural Stat Trick), behind only @Oliver Kylington and linemate @Tyler Pitlick.
In a larger sample of play, Coleman has been just as effective.
* – Value according to Evolving-Hockey‘s “Goals Above Replacement” and “Standing Points Above Replacement” models.
Coleman’s teams paid him a total of $6.06 million over the past four seasons. In turn, he provided them with $22.5 million of value through his play.
In his first four games as a Flame, Coleman has already amassed 1.9 GAR. After scoring a goal and an assist in Monday’s game against the New York Rangers, he’s up to three points on the year. Coleman will keep scoring if he keeps up his strong play at 5-on-5 and gets more bounces (and, perhaps, if he starts skating on a power-play unit).
There are plenty of reasons to be optimistic about Blake Coleman. If the rest of his tenure in Calgary resembles his first four games, he’ll quickly establish himself as an extremely popular player around the Scotiabank Saddledome.
Uncategorized
Recent articles from Mike Gould