Calgary Flames COVID update: a Saturday snapshot of the situation 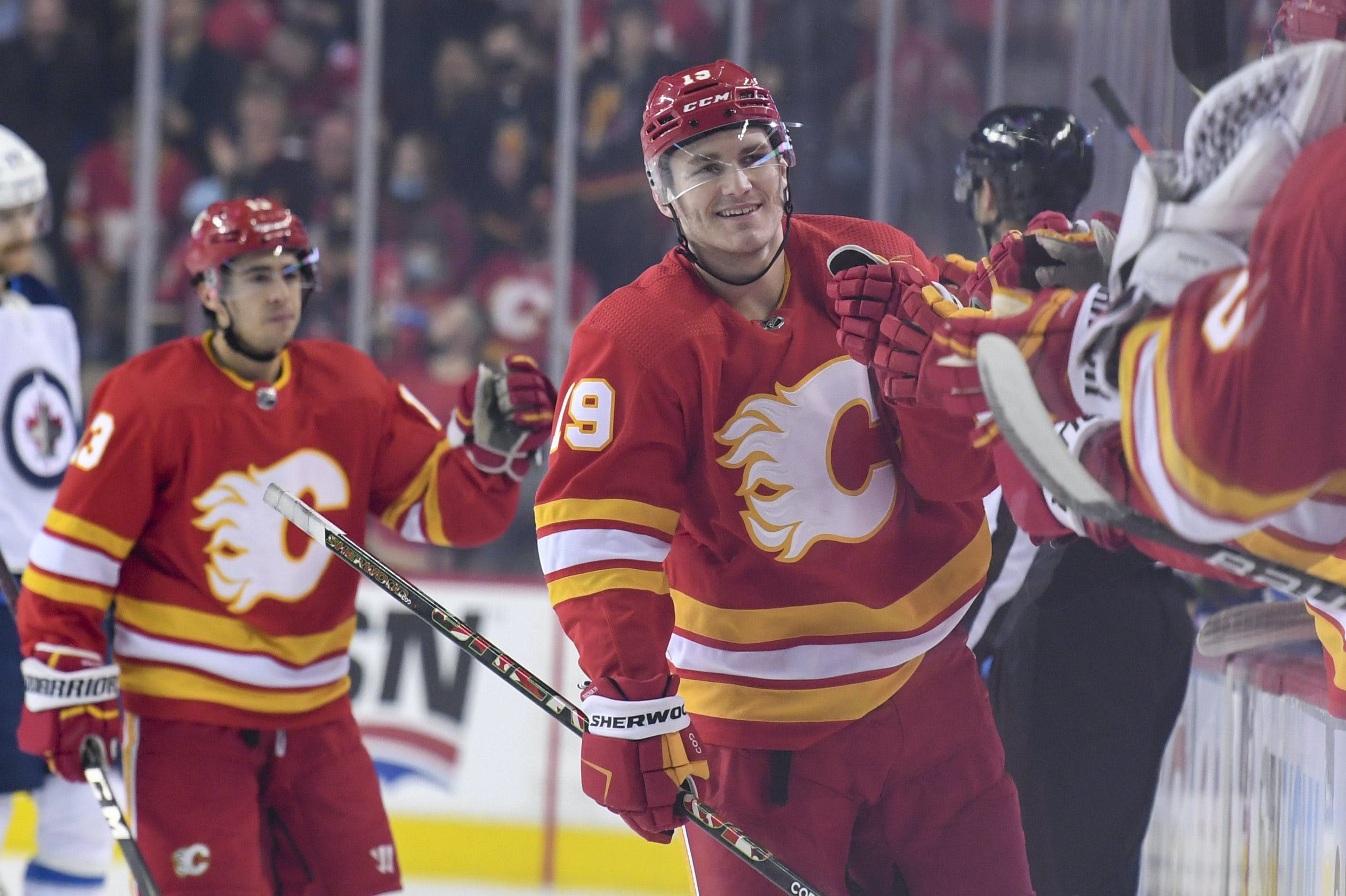 By Ryan Pike
1 year ago
On Saturday, the Calgary Flames announced no new individuals had entered the COVID-19 protocol. It’s the first time since last week that nobody new has entered the protocol.
With games postponed (at least) until Dec. 27’s scheduled Battle of Alberta, here’s a quick snapshot of where things stand for the Flames as of Saturday morning.

Which players are in the COVID-19 protocol?

Currently in the protocol are 19 Flames players:
(Three members of the coaching staff and another 10 support staff are also in the protocol.)
“I’ve never seen transmission on this level,” declared Flames physician Dr. Ian Auld on Friday’s media call. The team’s cases are generally asymptomatic or mildly symptomatic, though a handful (4-6) of cases have been moderately symptomatic according to Auld – it wasn’t specified if any players have experienced mild or moderate symptoms. While only three cases have received lab confirmation as being the new Omicron variant, all of them are probably the variant.
As of Dec. 18, four players aren’t in protocol: Dan Vladar, Michael Stone, Blake Coleman and Matthew Tkachuk.

When can they get out of the protocol?

Players can exit the league’s COVID-19 protocol when all three of these things have happened: (1) it’s been 10 days since they’ve experienced symptoms, (2) the team doctor signs off on them exiting the protocol, AND (3) it’s been 10 days since they tested positive.
We’re assuming that the players initially tested positive the day before they were announced as in the protocol since that’s the general procedure – in theory, they test positive and then the next day are entered into the protocol with a second, confirmatory positive test, so the 10-day clock begins the previous day.
Assuming everybody remains asymptomatic – which based on Dr. Auld’s comments won’t likely be the case – here’s the earliest that you can expect players to be able to exit the protocol:
Again: these are the early boundaries to when they could exit, but it seems probable (if not downright inevitable) that some or most of these players will exit the protocol later than these dates.

When do they play next?

As of right now, the Flames are scheduled to host the Edmonton Oilers on Dec. 27. Please don’t get emotionally invested in that date, though.
In the CBA, teams are forbidden from practing on Christmas Eve, Christmas Day and Boxing Day. The NHLPA and NHL have to agree to an exemption to practice (or even travel) on any of those dates. In a “normal” world, the Flames would’ve been at home with their families on those dates and likely fly up to Edmonton on the morning of the 27th for a skate and the game.
As you can see from above, if everything goes extremely smoothly then the entire team would (theoretically) be available to skate on the 26th and play on the 27th. But the Flames haven’t skated since their game on the 11th or practised since the 10th. It seems like a very hard sell to ask the players – all but four of whom have been going through COVID – to leave their families and practice on Boxing Day.

What happens if the Flames don’t have enough cap space to fill out a full lineup?

As of right now, the Flames have $614,000 in available cap space. With Brett Ritchie on the injury reserve and having already met the requirements for exiting the long-term injury reserve – missing 10 games or 24 days, whichever is longer – the Flames could also easily place him on LTIR without complicating their own lives.
So if the Flames are looking like they won’t have enough players, they can call up someone from Stockton (their cap hits would be pro-rated) with an eye towards using all of their cap space and maximizing their LTIR benefit. (A team is allowed to over-spend while in LTIR by the difference between their cap space at the time and the player’s cap hit that is being placed on LTIR, so teams benefit from having next-to-no space when they go on LTIR.)
Connor Mackey’s $912,500 cap hit is the best bet towards maximizing the LTIR benefit, and the team could call up a second player using the $900,000 of space from Ritchie’s salary – it’s awkward and technical, but functionally they’d get to use the full amount. (If needed, they can swap Mackey with another Stockton player once they’ve enacted LTIR – he’s been chosen entirely because his cap hit works best to use up the remaining cap space.)
Thursday’s situation for Carolina set a unique precedent for the league. Usually, if a team runs out of cap space for whatever reason, they’re required to play short a player or two for a game and afterwards the NHL allows them to call up players to fill in the gaps with no cap hits. They’re called “roster emergency exemption” recalls, or REEs.
Missing five players due to COVID, and after using LTIR space to bring up one replacement player, Carolina would’ve been four players short for Thursday’s game. But the league allowed them to call up two players immediately on REE recalls without playing short. So, if they’re being consistent, they’d allow the Flames to fill in the gaps to some degree. (The Flames would probably be required to play a couple players short, though, but this may prevent the Flames from having to be crazily shorthanded whenever they return.)
Per Brad Treliving on Friday’s call, nothing has really been discussed with the Flames yet about cap relief. But you’ve got to think that they’ll be bringing up what the league did for Carolina in whatever conversations they have.

Would bringing back taxi squads help the salary cap situation?

Not really.
Taxi squads were used last year because of the complicated Canada/U.S. border situation and travel challenges for short-term recalls for most teams. Basically, every team had six AHL players that travelled with the NHL team; for all intents and (cap) purposes, they were AHLers that were much easier to recall than their actual AHL players. (For the Flames, it allowed them to avoid travel quarantines for recalled players.)
We may see additional border challenges due to Omicron, though, and that may bring back taxi squads in the near future, but doing so wouldn’t really create salary cap relief for impacted clubs.
We’ll have more on this story as it develops.