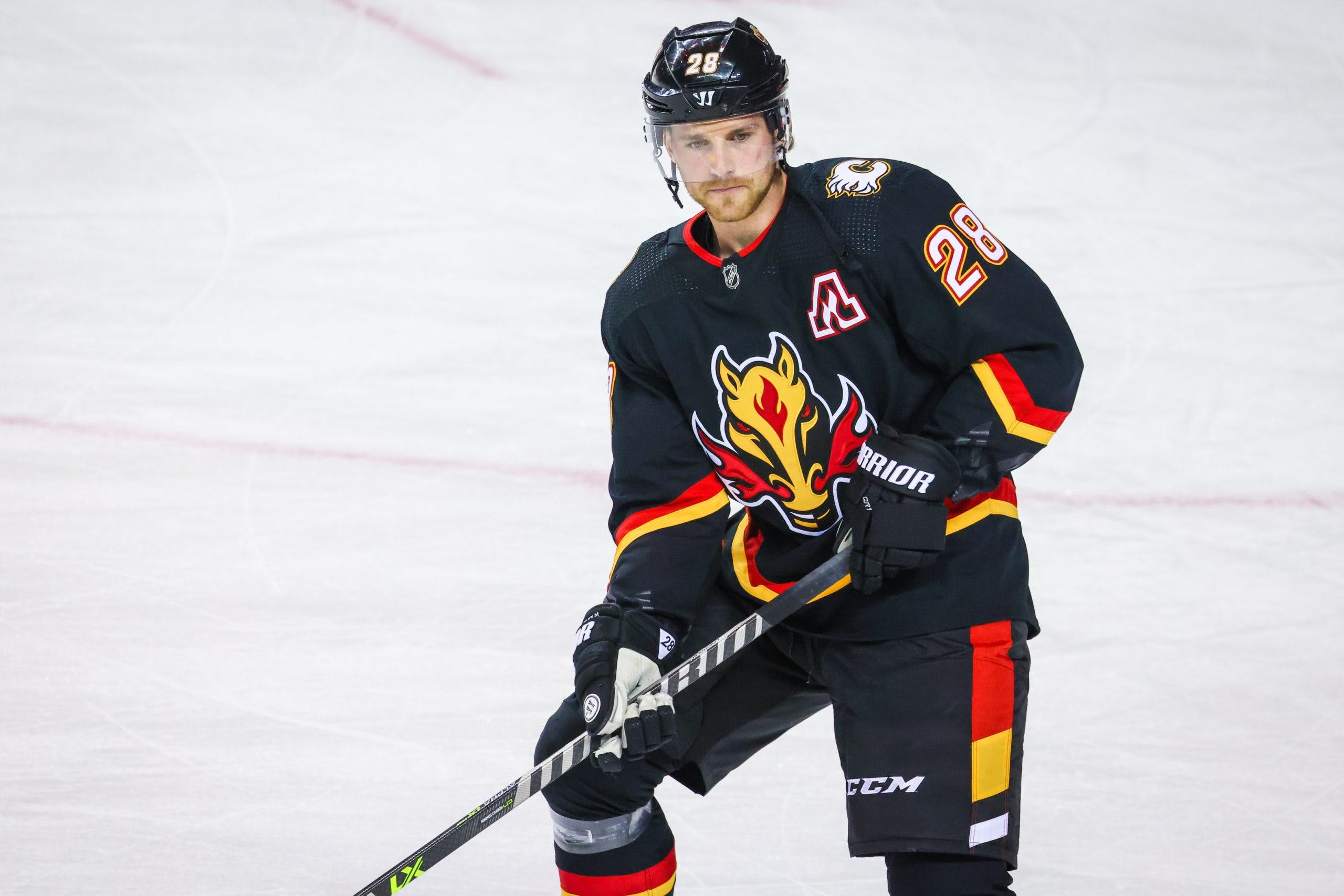 By Mike Gould
3 days ago
October of 2022 likely won’t go down as a particularly memorable month for Elias Lindholm.
The Swedish centre scored his first goal of 2022–23 in the Flames’ season-opening victory over the Colorado Avalanche on Oct. 15. He added another against the Vegas Golden Knights two games later.
But by Halloween, Lindholm found himself stuck at just three points in seven contests — a spooky sight for a player coming off a career-best 82-point campaign.
From there, the whispers started to ramp up on the outside: “He can’t drive a line.” “He’s a one-year wonder.” “He was carried by Tkachuk and Gaudreau.”
And to their credit, there’s no doubt Matthew Tkachuk and Johnny Gaudreau played critical roles in the success of the Flames’ dominant top line in the 2021–22 season.
Looking back, it’s genuinely absurd to contemplate how good Tkachuk, Gaudreau, and Lindholm were together. They collectively piled up more than 300 points in 82 games and outscored their opponents by hilarious margins. It might be decades before we see a better top trio on this Flames team.
It’s certainly worth contemplating whether the departed duo would have fared better sticking around with Lindholm as their centre. Tkachuk is on pace for another 100-point season but has only been able to do so much on the thoroughly middling Florida Panthers. Likewise, Gaudreau is bringing back memories of a late-stage Pavel Bure with his sky-high scoring output on the cellar-dwelling Columbus Blue Jackets.
Lindholm undoubtedly benefited from playing on a line with Tkachuk and Gaudreau. Tkachuk has always been a dominant two-way player and Gaudreau is one of the most effective offensive catalysts in hockey. You can’t just replace players like them.
The Flames tried. Nazem Kadri and Jonathan Huberdeau are smack-dab in the middle of their respective adjustment processes. But the one big holdover up front from the previous era of Flames hockey wears No. 28 and remains the team’s No. 1 centre.
It’s not Kadri who leads this iteration of the Flames in scoring. Huberdeau? Nope. It’s Lindholm, the old standby, the so-called product of the stars who skipped town, who has a club-best 42 points in 46 games — including 26 in 24 appearances since Dec. 1.
The Flames first assembled the line of Lindholm, Tyler Toffoli, and Dillon Dube in San Jose two weeks later. For the most part, it’s remained together ever since — and for good reason. According to Natural Stat Trick, that trio has spent 173:48 together at 5-on-5 and has collectively outscored its opposition 12–8 while controlling 55.24 percent of the expected goals.
Lindholm and Toffoli rank first and second on the Flames’ scoring leaderboard since Dec. 1. They’re also both among the Top 50 NHL scorers in that timeframe, with Lindholm sitting between Mark Scheifele and Brad Marchand in 25th place.
Connor McDavid has 21 even-strength points since the beginning of December; Lindholm has 17, one more than both Gaudreau and Tkachuk. How’s that for driving a line?
Lindholm’s production is one thing; his usage is another. Since Dec. 1, he ranks eighth among all Flames forwards in 5-on-5 ice time (between Toffoli and Milan Lucic) with an average of 12:24 per game. He ranks 207th in that category among the 408 NHLers with a minimum of 100 total minutes over that span.
Flames head coach Darryl Sutter has delegated responsibilities among his players in much the same way, for better or worse, since he returned to the club in 2021. He’s almost always divided up the ice time among his top nine forwards in an egalitarian fashion. While he sometimes makes changes if a certain unit is noticeably struggling, Sutter is a coach who likes to roll his lines.
Nevertheless, the current arrangement seems to be working for Lindholm, who, having just turned 28 in December, is somehow one of the younger members of the Flames’ forward group. He’ll become eligible to sign a contract extension with the club on July 1 of this year.
The Flames have already elected to push in all their chips with massive long-term contracts for Kadri, Huberdeau, and MacKenzie Weegar. At this point, what’s one more?
Of all the core players on this Flames team, Lindholm might just be the most difficult to replace. It’s premature to say the Flames’ contention window has closed, but losing Lindholm would cause it to slam shut and shatter into a million pieces. This team is already way past the point of no return. Barring a complete collapse, extending Lindholm is nothing short of a necessity.
Yes, it’s been a so-so season for the Flames and their fans, but Lindholm is doing what he can to turn this ship around. We’ll see who comes out looking better on Monday when Gaudreau faces off against his old linemate at the Saddledome.
Editorials
Recent articles from Mike Gould