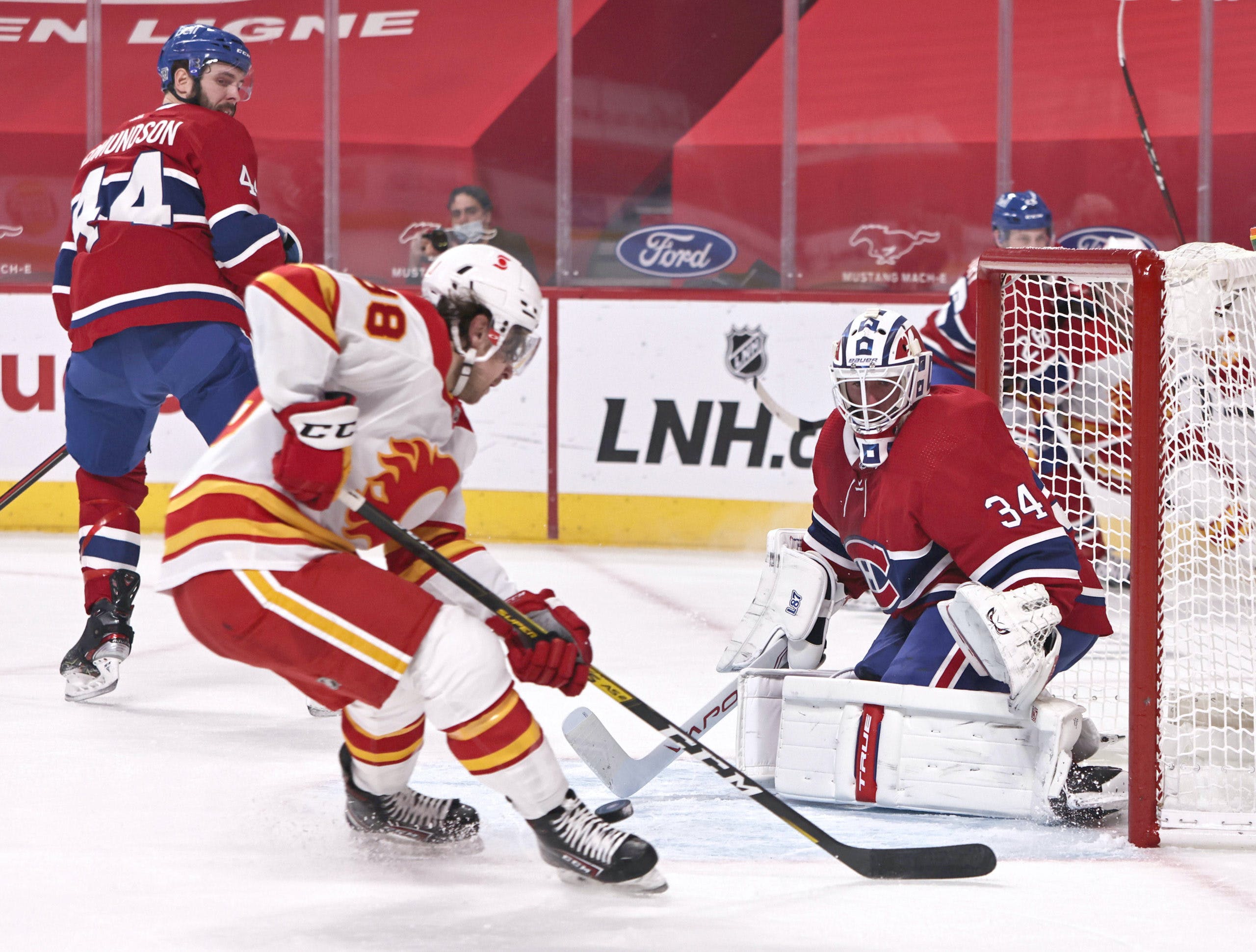 By Ryan Pike
1 month ago
Be sure to check out NHL betting site Betway for the latest Flames game day odds!
The Calgary Flames (13-11-4, 30 points) will try to finish their road trip at .500 when they head to Bell Centre to visit the Montreal Canadiens (13-12-2, 28 points). The Flames have a regulation loss and an overtime loss to their credit; a win (of any kind) would send them home with three points on a three game eastern trip.
The broadcast begins at 5 p.m. MT on Sportsnet West (and the national feed) and Sportsnet 960 The Fan!

Projected lines courtesy Daily Faceoff:
Huberdeau – Backlund – Toffoli
Dube – Kadri – Mangiapane
Ruzicka – Zohorna – Phillips
Coleman – Lewis – Ritchie
Hanifin – Andersson
Zadorov – Tanev
Mackey – Stone
We’re projecting Jacob Markstrom to start, backed up by Dan Vladar. The projected extras are Milan Lucic, Brett Ritchie and Connor Mackey. Markstrom’s infamous “I suck at hockey” comments came after the loss to Montreal a little while back, and he gets a chance to exorcise some demons at Bell Centre. Per reports from the rink, MacKenzie Weegar missed morning skate with a (non-COVID) illness and so he’s a game-time decision for Monday night. If he can’t play, Connor Mackey will slot in.
Update: per club, no Elias Lindholm (upper body) or MacKenzie Weegar (illness).
The Flames are 3-1-1 since that loss to Montreal. Aside from a fairly uninspired performance against Columbus, the team has looked quite good of late. They have some chemistry in their lines and they’ve managed to mix in youngsters like Matthew Phillips and Radim Zohorna, who have joined Adam Ruzicka in giving the forward group a bit of pep.
Keep an eye on Tyler Toffoli, making his return to Montreal after his Valentine’s Day trade to the Flames last season.

Projected lines courtesy Daily Faceoff:
Caufield – Suzuki – Anderson
Dadonov – Dvorak – Armia
Slafkovsky – Dach – Hoffman
Pezzetta – Evans – Pitlick
Edmundson – Guhle
Harris – Kovacevic
Xhejai – Wideman
We’re projecting Jake Allen to start, backed up by Samuel Montembeault. The Habs don’t really have any extra healthy bodies on their active roster. (Mike Matheson, David Savard and Sean Monahan are dealing with minor injuries but are, for now, on the active roster.)
Since their win over the Flames on Dec. 1, the Habs are 1-2-1. In their three losses, they gave up an average of 5.3 goals against. They’re a team that when they’re not getting good goaltending, things tend to go south for them very quickly. But when they’re getting saves, as the Flames learned, they can be a grind to play against.

This is the second of two games between these clubs this season. Montreal beat Calgary 2-1 at the ‘Dome a little while back, even though the Flames threw a zillion shots on net.