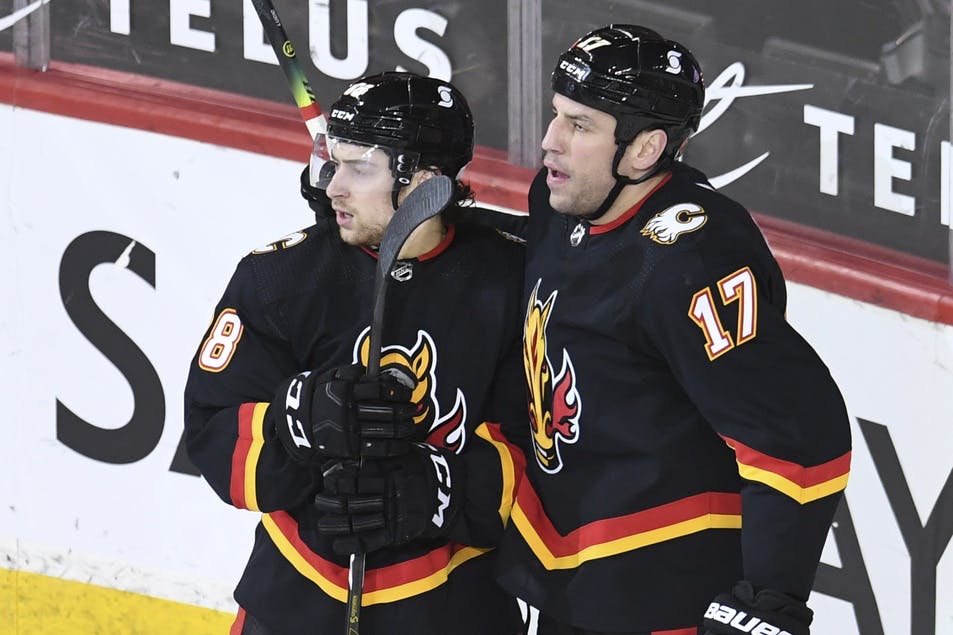 By Ryan Pike
1 month ago
Be sure to check out NHL betting site Betway for the latest Flames game day odds!
Riding a four-game losing skid (and a three-game points streak), the Calgary Flames (13-11-6, 32 points) try to get back into the win column when they host the St. Louis Blues (14-15-1, 29 points). The Blues are playing the second game as a back-to-back set (and second of a five game western swing), while both teams have required overtime in each of their past three games.
The broadcast begins at 7 p.m. MT on Sportsnet West and Sportsnet 960 The Fan!

Projected lines courtesy Daily Faceoff:
Dube – Lindholm – Toffoli
Huberdeau – Kadri – Mangiapane
Ruzicka – Backlund – Coleman
Lucic – Zohorna – Lewis
Hanifin – Andersson
Zadorov – Weegar
Mackey – Stone
Jacob Markstrom is the projected starter, backed up by Dan Vladar. The projected extras are Matthew Phillips and Brett Ritchie. Chris Tanev is still day-to-day after blocking a shot with his head. Milan Lucic returns to the lineup after being absent for three games as a healthy scratch.
The Flames have lost four in a row. But their last three have been overtime or shootout losses, so they’ve gotten points. Have they been bad? Nope! Have they been great? Also nope! They’ve been a bit uneven in their games, and they haven’t had anybody be able to be a difference-maker offensively.
Can anybody be that guy against the Blues?

Projected lines courtesy Daily Faceoff:
Saad – O’Reilly – Leivo
Buchnevich – Schenn – Tarasenko
Barbashev – Thomas – Kyrou
Toropchenko – Acciari – Walker
Leddy – Parayko
Krug – Faulk
Mikkola – Bortuzzo
We’re projecting Thomas Greiss to start, backed up by Jordan Binnington (who started on Thursday in Edmonton). Thursday’s extras were Calle Rosen, William Bitten, and Australian national hero Nathan Walker. Walker is in, bumping Tyler Pitlick to the press box.
It’s the second half of a back-to-back for the Blues, who beat Edmonton in a shootout last night in a game that was punctuated by some back and forth swings – and a few rough turnovers from Edmonton. The Blues are hoping they can claw back to .500 with a nice outing against the Flames.

The Flames are without Oliver Kylington and Chris Tanev.
The Blues are without Marco Scandella, Scott Perunovich and Logan Brown.

This is the first of three meetings between these teams this season. The Blues won two of three outings last season against Calgary.