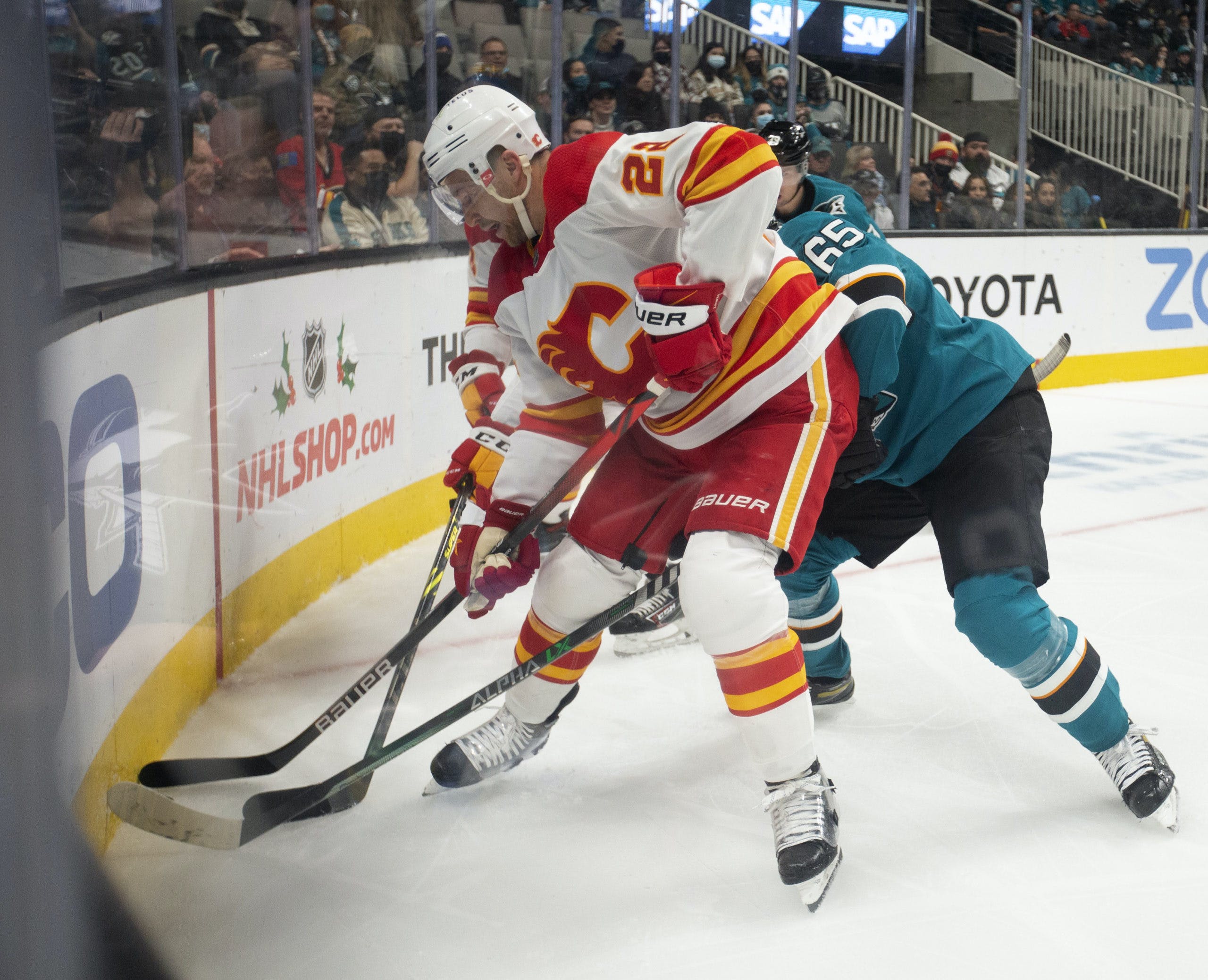 By Ryan Pike
1 month ago
Be sure to check out NHL betting site Betway for the latest Flames game day odds!
It’s the final week of games before the Christmas break, and the Calgary Flames (13-12-6, 32 points) are out in California playing four extremely important games against divisional foes. First up? The San Jose Sharks (10-16-6, 26 points), who played (and lost in a shootout) last night in Los Angeles. It’s the first of four games in California where the Flames really, really need to grab some points.
The broadcast begins at 8 p.m. MT on Sportsnet West and Sportsnet 960 The Fan!

Projected lines courtesy Daily Faceoff:
Dube – Lindholm – Toffoli
Huberdeau – Kadri – Mangiapane
Ruzicka – Backlund – Coleman
Lucic – Lewis – Ritchie
Hanifin – Andersson
Zadorov – Weegar
Mackey – Stone
Based on reports from morning skate, we’re projecting Jacob Marstrom to start, backed up by Dan Vladar. (Vladar has points in each of his last five outings, going 4-0-1, while Markstrom is winless in his past five, going 0-3-2. Both have played well.) Their projected extras are Matthew Phillips and Dennis Gilbert (who’s been recalled), while Chris Tanev is projected to miss his third consecutive game after blocking a shot high in Montreal. Radim Zohorna missed morning skate with a non-COVID illness, per the club.
The Flames have lost five games in a row, going 0-3-2. They’re at a point in their schedule right now where, while they’re firmly in the playoff mix, they desperately need to get some momentum, wins and points so they can go from being in the mushy middle of the playoff pack to the top of the pack. They don’t need to be faster than everybody, they just need to be faster than the bear. Right now, the bear is firmly on their heels.

Projected lines courtesy Daily Faceoff:
Meier – Hertl – Labanc
Bonino – Couture – Barabanov
Gregor – Sturm – Svechnikov
Lindblom – Lorentz – Gadjovich
Megna – Karlsson
Vlasic – Benning
Harrington – Simek
Kaapo Kahkonen is expected to start for the Sharks, backed up by James Reimer. Their extras on Saturday were Nick Cicek, CJ Suess and Luke Kunin.
The Sharks are 2-1-2 in their last five games. Prior to their shootout loss to Los Angeles on Saturday, they had rattled off back-to-back wins, their first consecutive wins in a month. The Sharks aren’t a bad team, but they’re young, inconsistent and lack firepower.
But they’re still a team that is capable of stealing wins with good goaltending, and due to a few players who are capable of scoring key goals at key times.

The Flames are without Oliver Kylington and Chris Tanev.
The Sharks are without Nikolai Knyzkhov, Markus Nutivaara, Mario Ferraro and Matthew Nieto.

This is the first of four games between these teams this season. In 2021-22, the Flames won just once in four games against the Sharks.