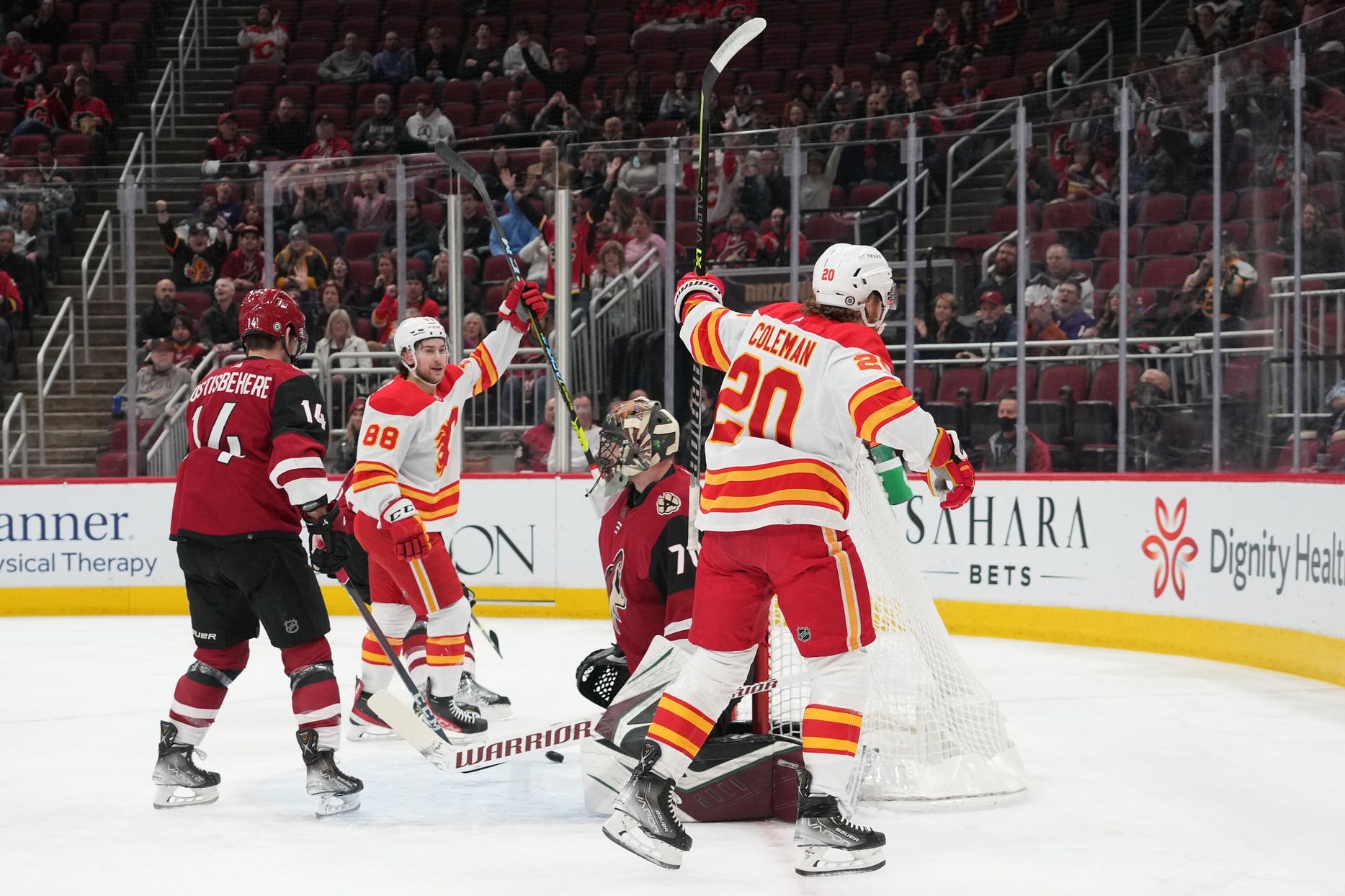 By Ryan Pike
10 months ago
After a big comeback win in Dallas on Tuesday, the Calgary Flames headed to scenic Glendale, Arizona to face the Arizona Coyotes in one of their final trips to Glendale before the Coyotes move to wherever they’re playing next season.
The Flames were very good early, weathered some Coyotes push-back, and managed to finish strong in a 4-2 victory over the Coyotes on Wednesday night.

The Flames were all over the Coyotes in the first period. The Flames had the first 12 shots on goal, and they scored on one of those goals.
The visitors drew an early penalty and went to work, basically cycling the puck for two consecutive minutes. The Flames didn’t score, but shortly after the power play expired Blake Coleman accepted a pass from Andrew Mangiapane, turned and fired a shot from a low angle that beat Karel Vejmelka to give the Flames a 1-0 lead.
The Coyotes answered back, however. Noah Hanifin lost a 50/50 puck battle below the defensive red line and the puck squirted out to the point for Jacob Chychrun. Chychrun’s point shot was deflected by Alex Galchenyuk, part of a crowd in front of the Flames net, and the puck eluded Jacob Markstrom to make it a 1-1 game.
But the Flames retook the lead before the period ended. The top line got the puck into the Coyotes zone and went to work, with Johnny Gaudreau working below the goal line to maintain possession and stymie the Coyotes defenders. He found Elias Lindholm at the face-off dot and Lindholm’s shot through traffic beat Vejmelka to make it 2-1.
Shots were 26-8 Flames (23-8 Flames at five-on-five) and scoring chances 20-3 Flames in the first period.
The Coyotes tied things up early in the second period. The Flames got a bit too loose in their own zone and Clayton Keller was left completely alone in the slot. Nick Schmaltz found him and one Keller shot later, it was a 2-2 game.
But the Flames re-retook the lead before the period ended. Mikael Backlund made a nice play beside the net off an initial Vejmelka save to maintain possession. Coleman found Chris Tanev at the point and Tanev’s point shot glanced in off Dysin Mayo’s pants (battling with Mangiapane out front) to give the Flames a 3-2 advantage.
Shots were 16-10 Flames (all at five-on-five) and scoring chances 16-10 Flames in the second period.
The Coyotes pressed early in the third period, but the Flames eventually answered back and gave themselves an insurance goal. Oliver Kylington rushed to keep a loose puck in Arizona’s end. A few passes around later, Kylington’s wrister from the point was deflected by Coleman past Vejmelka to give the Flames a 4-2 lead. The Flames held on for the victory.
Shots were 10-8 Coyotes (7-6 Coyotes at five-on-five) and scoring chances 11-8 Coyotes in the third period.

The Flames were easily the more dangerous offensive team in this game. In the offensive zone, and often in the neutral zone, they worked hard, made smart decisions, and were very tactically sound. In the defensive zone, they were sloppier than they probably desired to be – both of Arizona’s goals were products of the Flames getting bunched up defensively and not executing well in battles.
But hey, for a team on the back half of a back-to-back, they generated a ton of chances and shots, and just enough goals to get the desired result.

Tanev had four points, a new career high, and he was all-around good tonight. Heck, he’s usually good.
But also give some stick-taps to Coleman, Backlund, Mangiapane and Gaudreau.

Erik Gudbranson engaged in fisticuffs with Liam O’Brien in the first period after a hit.
Every single Flames skater had a shot on goal, except for Dillon Dube.

The Flames (23-13-6) are off for the All-Star Break! They’re back to practice on Monday and are back in game action next Wednesday when they host the Vegas Golden Knights.