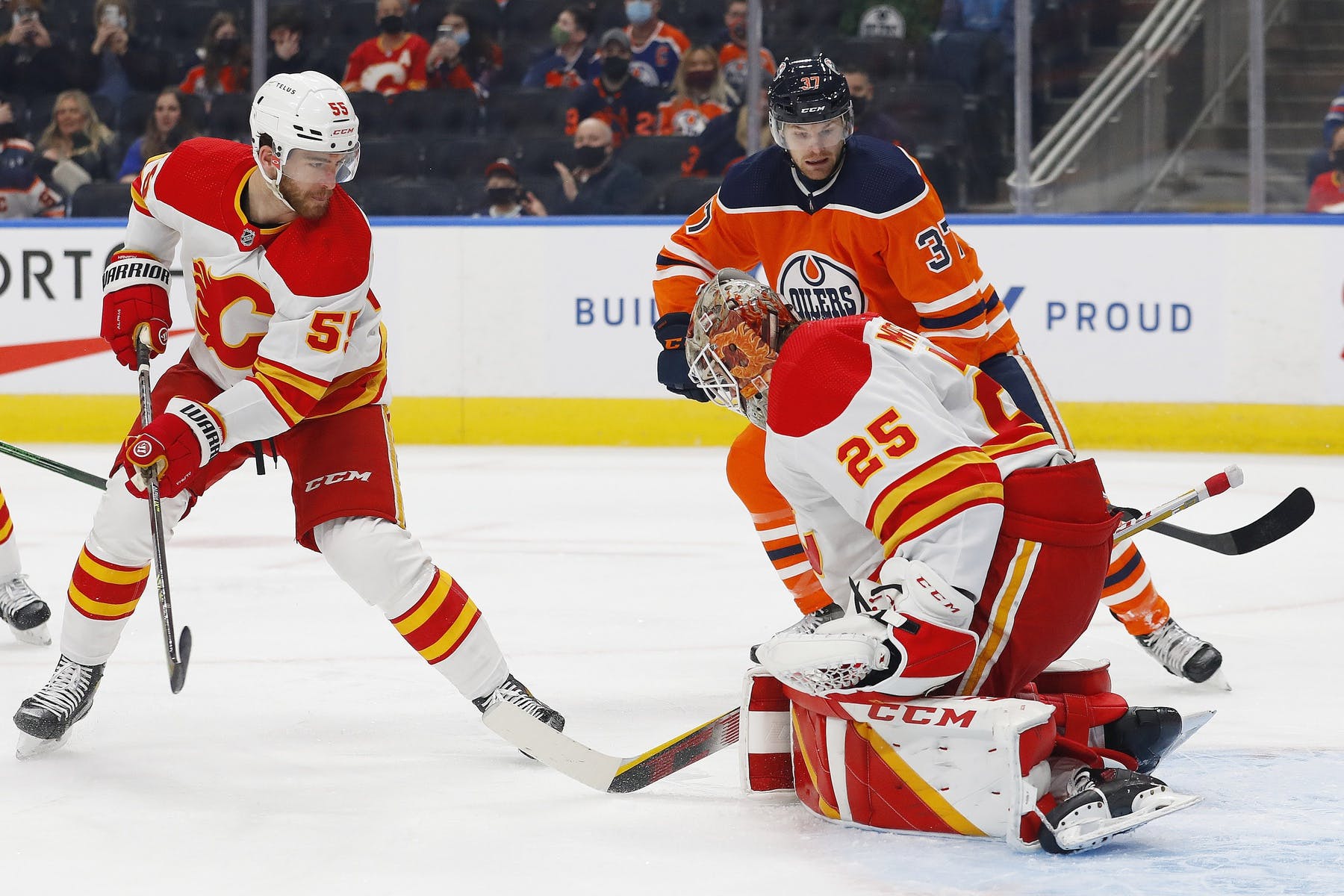 By Ryan Pike
1 year ago
The Calgary Flames met the Edmonton Oilers on Saturday night for the first time since mid-October. The Flames were good, but a combination of penalty trouble and the Oilers stars playing like stars made this game very competitive.
The Flames ended up skating to a close, entertaining 5-3 loss in Edmonton.

The Flames opened the scoring in this game. Elias Lindholm entered the Oilers zone with speed, with Matthew Tkachuk accompanying him. Lindholm’s shot from the slot was stopped by Mikko Koskinen, but Tkachuk beat Cody Ceci in the race to the loose rebound and jammed it into the net to give the Flames a 1-0 lead.
After Sean Monahan drew a penalty driving to the net, the Flames had a superb power play. They generated six shots. The sixth went in. Dillon Dube and Andrew Mangiapane prevented an Edmonton zone exit, then a Rasmus Andersson point shot was tipped by Milan Lucic past Koskinen to make it 2-0 Flames.
Shots were 19-13 Flames (13-11 Oilers at five-on-five) and scoring chances 10-4 Flames in the first period.
The Flames repeated during their morning media chats that they needed to avoid taking penalties against Edmonton. In the second period, they did not follow their own advice.
Oliver Kylington was called for a cross-check in the defensive zone. Edmonton moved the puck well on the resultant power play and the Flames penalty kill was a little bit passive, allowing Evan Bouchard time to fire a one-timer from the point through traffic. It beat Jacob Markström to cut Calgary’s lead to 2-1.
Elias Lindholm took a holding penalty in the defensive zone. Another couple power play passes and Bouchard scored through traffic from the point again to tie the game at 2-2.
Edmonton grabbed a lead a little bit later. The Flames defended a two-on-two rush well, but the third man in, Brandon Perlini, wasn’t picked up by anybody and got tons of space to accept a Derek Ryan pass and beat Markström with a laser shot from the top of the face-off circle to make it 3-2 Oilers.
But 58 seconds later, the Flames evened things up. Noah Hanifin lobbed a wrister from the point that Koskinen couldn’t quite track; the puck dropped on the Oilers goaltender and tied the game up at 3-3.
Shots were 12-11 Oilers (11-9 Flames five-on-five) and scoring chances 7-7 in the second period.
The Flames pressed for the go-ahead goal for much of the third period. But Kylington fell on an odd-man rush in the other direction and Leon Draisaitl took advantage of the extra space to cut to the net, waiting out a sprawling Markström and beating him high to give the Oilers a 4-3 lead.
The Flames pressed late but Edmonton held on for the victory, with Draisaitl adding an empty netter right before the final horn for a 5-3 win.
Shots were 17-6 Flames (17-4 Flames at five-on-five) and scoring chances 7-6 Flames in the third period.

There’s really just two reasons: penalties and imperfect execution in the offensive zone.
The penalties part is obvious: Edmonton’s power play is really, really good, even with key pieces missing, and as long as Connor McDavid and Draisaitl are on this team you would be wise not to give them additional time and space.
The execution part is thus: the Flames were awesome with positioning and puck possession for the most part, but they frequently made one too many passes or found a way not to pull the trigger on a high-danger scoring chance. Some of this was a product of Koskinen having a big bounce-back game, but the Flames needed a little more out of their offensive weapons.

Hanifin had a point on every Flames goal, so let’s give it to him.
Stick-taps to Kylington and Chris Tanev, too, as they were matched up with McDavid and were full marks in terms of keeping him bottled up at five-on-five.

Draisaitl’s go-ahead goal in the third period was a combination of bad bounces, bad luck and Kylington toppling to the ice at the wrong time. But also really undid a lot of strong work by the visitors on this occasion.

The Flames are now 2-4-4 when tied after two periods.

The Flames (18-12-6) are back in action on Monday night when they host the St. Louis Blues.