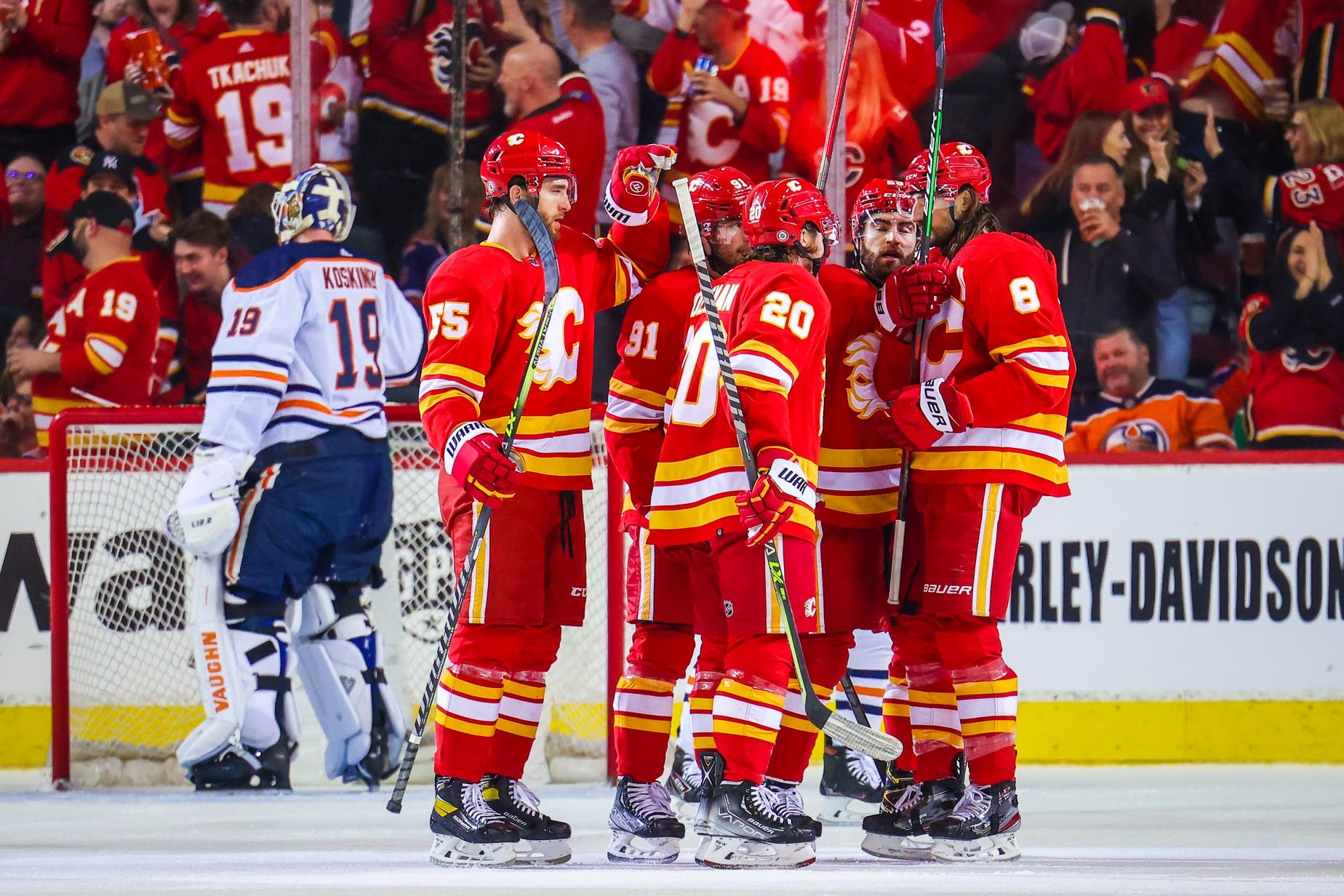 By Ryan Pike
10 months ago
Well, that escalated quickly.
The fourth instalment of the Battle of Alberta between the Calgary Flames and Edmonton Oilers took place on Saturday night in Calgary. In short: it was a lot.
The two teams combined for 14 goals in a highly entertaining, back and forth affair. The Flames managed to out-gun the high-powered Oilers offense, earning a 9-5 victory.

The Oilers opened the scoring, and quickly. Evan Bouchard’s point shot was deflected by Derick Brassard past Jacob Markstrom to give Edmonton a 1-0 lead. (Chris Tanev was just beaten out for position in front by Brassard.)
But a little bit later, the Flames answered back. Elias Lindholm began the play with a puck battle in the defensive zone. The Flames got the better of that battle and Lindholm activated and headed up ice. The Flames executed a nice breakout with some quick passes, ending with Matthew Tkachuk springing Lindholm in all alone on Mikko Koskinen. He beat him high to tie the game at 1-1.
A little later, another nice breakout led to the Flames taking the lead. Calle Jarnkrok won a face-off and the Flames headed up ice. Blake Coleman ended up putting the puck on Tanev’s stick as the D-man jumped into the rush. Koskinen made the save on Tanev, but he booted out the rebound and it went off Darnell Nurse’s stick blade and into the net to give the Flames a 2-1 lead.
15 seconds later, the Flames scored again! Off the face-off, the Flames won and headed into the Edmonton zone. A few passes later, and Mikael Backlund buried a pass from Andrew Mangiapane from behind the net to give the Flames a 3-1 lead.
But the Flames gave one back late in the period. Ryan Nugent-Hopkins stared down Erik Gudbranson and Nikita Zadorov at the defensive blueline. Leon Draisiatl saw a gap and turned on the speed, accepted a great pass from Nugent-Hopkins, and snuck behind Zadorov and beat Markstrom high to cut the Flames lead to 3-2.
Shots were 18-9 Oilers (15-9 Oilers at five-on-five) and scoring chances 15-15 in the first period.
The Flames took a penalty late in the second period, so Edmonton began the third period with a power play. A few quick passes ended with Draisaitl scoring from the slot, burying a pass from Zach Hyman to tie the game at 3-3. (This goal was 44 seconds into the period.)
But the Flames answered back. Johnny Gaudreau sped around the Oilers zone, dangling the puck, and the Oilers defenders followed him around. That opened up a seam for Oliver Kylington to sneak in from the point as the trailing attacker. A quick pass caught Koskinen way out of position (because of Gaudreau’s dangles) and Kylington buried the gimme to give the Flames a 4-3 lead.
But the Flames took another penalty and on the ensuing advantage, Connor McDavid entered the zone and fed Nugent-Hopkins with a crisp pass. Nugent-Hopkins beat Markstrom with a quick wrister to tie the game up at 4-4.
But the Flames responded back quickly. A heads up bank pass by Tanev sprang Gaudreau into the Oilers zone. This time, he faked skating around the net and instead passed to Tkachuk, wandering into the zone late. The Oilers (and Koskinen) were caught unaware and Tkachuk beat a scrambing Koskinen to give the home side a 5-4 lead.
That ended Koskinen’s night and in came Mike Smith in relief for the Oilers.
Another series of Gaudreau dangles in the Edmonton zone led to another Flames goal. This time, the Oilers seemed super committed to not being embarrassed in their own end. So they guarded Gaudreau attentively. But that left Tkachuk open near the front of the net, and he buried a pass from Gaudreau to make it 6-4 Flames. (He also appeared to shout something mean at Smith.)
The Oilers got one back, though, after the Flames took a pair of penalties in rapid succession and gave Edmonton 1:57 of a two-man advantage. On the resulting advantage, Draisaitl completed his hat trick by burying a cross-slot pass to cut Calgary’s lead to 6-5.
Shots were 13-9 Flames (10-5 Flames at five-on-five) and scoring chances 8-5 Flames in the second period.
The Flames pulled away in the third period. Markstrom made a big save on Evander Kane, and the play went in the other direction. Tkachuk won a corner battle for the puck, allowing Gaudreau to tee up a shot in the slot for Lindholm, who beat Smith to make it 7-5 Flames.
Backlund made it 8-5 Flames a little later, accepting a drop-pass from Tyler Toffoli after a zone entry and beating Smith high glove-side. (He was given what felt like eons to shoot by the Oilers defenders.)
The Oilers turned the puck over in the neutral zone, allowing Backlund and Dillon Dube to trek into the offensive zone. The Oilers over-skated a loose puck in their own zone, and Dube jumped on it and chipped it past Smith to make it 9-5 Flames.
Shots were 16-4 Flames (15-3 Flames at five-on-five) and scoring chances 14-4 in the third period.

Let’s get one thing out of the way: neither team was especially good defensively, though the Flames were a little bit better than the Oilers in that respect. This was a throwback game in every sense of the word, basically river hockey with the goalies on both teams hung out to dry. The Flames had the excuse of this being their second game in as many nights, but they’ve been fairly clunky defensively for the past few games, too.
But the Flames being a little bit better defensively (and Markstrom being better than Edmonton’s goalies) was a big thing here. The Flames only allowed two goals at even strength, and at five-on-five they generated a ton off winning defensive zone battles, face-offs, and timely saves.
The Flames won’t be happy about the number of penalties they took and the number of power play goals they allowed, but man, when this game was played at even strength, the Flames were pretty good with the puck. If they can button up a bit defensively, like they were looking about five or six games ago, they might be a team to reckon with come May and June.

Gaudreau had five assists. He was awesome.
Also give props to Tanev, Backlund, Noah Hanifin, Tkachuk, Lindholm and Toffoli, who all had well-earned multi-point efforts.

Let’s take it back to the second period, where the Flames scored twice in a 15 second span. This tilted things from fairly even to 3-1 Flames. Sure, Edmonton scored subsequently, but the Flames held serve for the rest of this game and never trailed subsequently.

As noted earlier today, this was Hanifin’s 500th NHL game.
This was the first official sell-out of the season at the Saddledome.

The Flames (40-17-8) are back on Tuesday night when they host the Colorado Avalanche.
Via Pat Steinberg: As of this writing, the Flames’ magic number to clinch a playoff berth is now 8.5 – any combination of 8.5 Flames wins or Vegas losses clinches a post-season spot for Calgary.