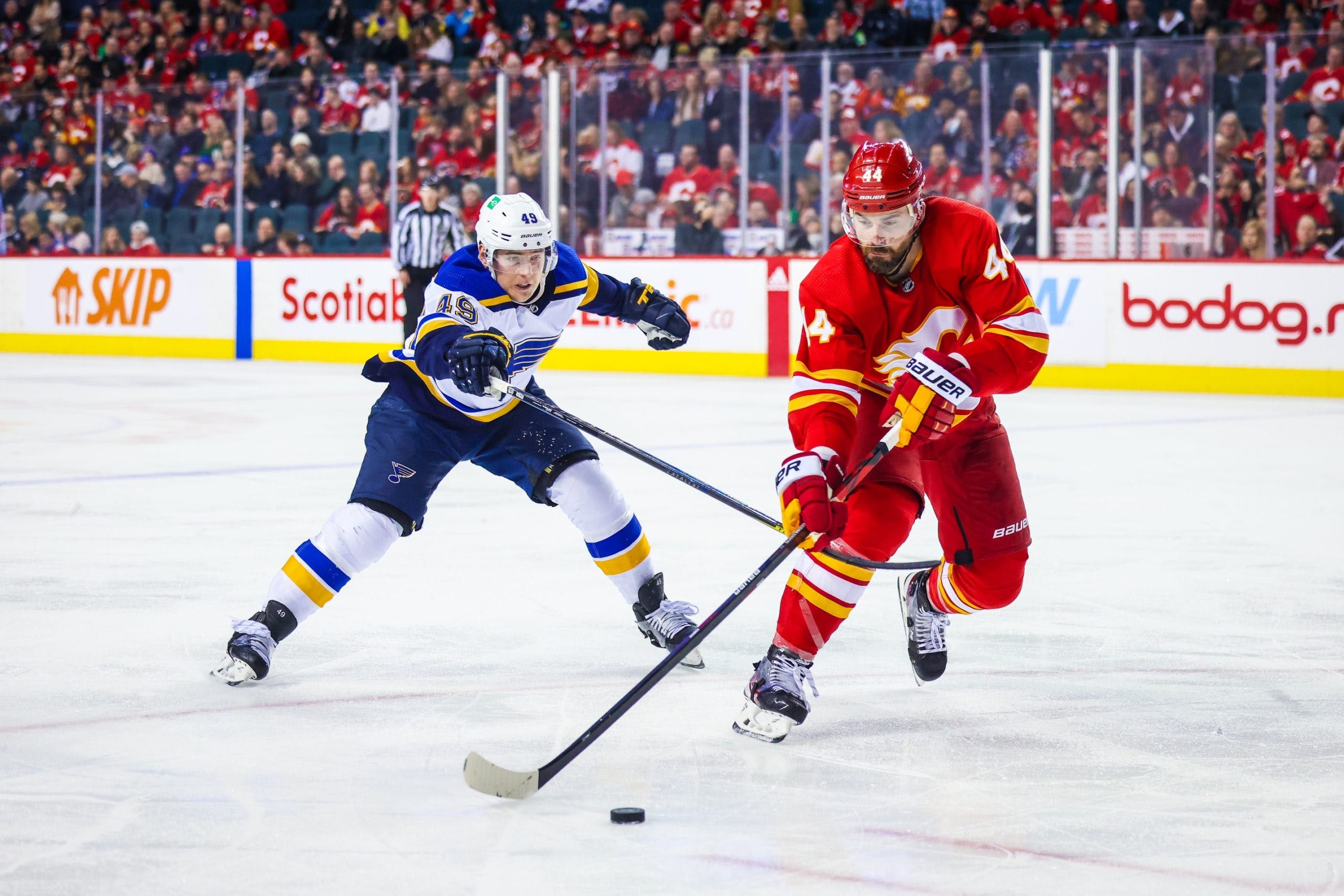 By Ryan Pike
9 months ago
The Calgary Flames hosted the St. Louis Blues on Saturday night. The Blues played a good road game and the Flames struggled to get much going offensively until late in the game, but it was ultimately some iffy defensive play at key times that led to the Flames’ downfall.
The Flames lost 6-4 to the Blues to push their losing skid to three games (0-2-1).

The visitors opened the scoring just 54 seconds into this one on the very first shot of the game. The Flames’ top line lost a board battle in the Blues zone. Vladimir Tarasenko passed the puck up to the point, where Justin Faulk’s point shot was deflected by Robert Thomas in the slot – beating Jacob Markstrom – and giving the Blues a 1-0 lead.
But the Flames answered back off a nice fourth line forecheck and some confusion from the Blues (as a result of said forecheck). Both Noah Hanifin and Rasmus Andersson unleashed point shots, with the rebounds clanging around the slot area. Ville Husso lost track of a bouncing puck and Brett Ritchie wandered into the net-front area and bonked the puck past Husso and into the net to tie the game at 1-1.
Midway through the period, the Flames took the lead. Mikael Backlund induced a Blues turnover in the neutral zone, then fired a pass to Johnny Gaudreau at the offensive blueline. Gaudreau received the pass in his skates, booted it up to his stick, roared in and fired the puck high glove-side on Husso to give the locals a 2-1 lead.
But the Blues answered back late in the first period. After Chris Tanev was called for high sticking, the Flames managed to keep the Blues from setting up in the offensive zone. But with a few seconds left in the penalty, the Blues finally got possession deep in the Flames zone. Ryan O’Reilly received a pass from Brayden Schenn, spun around and beat Markstrom from the slot to tie the game at 2-2.
Shots were 16-6 Flames (16-4 Flames at five-on-five) and scoring chances 13-4 Flames in the first period.
The Flames made a push throughout the first half of the second period, but the Blues did a savvy job of defending their zone and keeping the Flames to the outside. Eventually, the Blues were rewarded with chances of them own and cashed in.
The top line lost a face-off in their own zone and the Blues began cycling the puck. Brandon Saad nearly tapped a pass into an open net, and Nick Leddy put a shot wide, but Faulk snuck in from the point and tapped in a pass from David Perron to give the Blues a 3-2 lead.
Shots were 12-4 Flames (10-4 Flames at five-on-five) and scoring chances 11-5 Flames in the second period.
The Flames tried to get the tying goal for awhile in the third period, but the Blues defended fairly well. Midway through the period, though, the Flames finally broke through and tied it up. The Flames got an initial scoring chance but the Blues couldn’t clear the net-front area. A scramble ensued and (a) Noah Hanifin buried a loose puck and (b) Ritchie had his leg folded underneath him and left the game. Either way, the game was tied up at 3-3.
The Blues took the lead late. Thomas was allowed to skate deep into the Flames zone, though the Flames kept him in the corner. However, he found Nathan Walker all alone in the high slot, and his shot beat Markstrom to give the Blues a 4-3 lead.
Ivan Barbashev scored an empty-netter to make it 5-3 Blues. Dillon Dube scored late to cut the lead to 5-4 Blues, but that was as close as the Flames got. Saad added another empty netter to make this a 6-4 victory for the Blues.
Shots were 15-15 (13-12 Blues at five-on-five) and scoring chances 12-7 Blues in the third period.

The Flames were pretty blah in the first 40 minutes, with fits and starts of good play, but generally the Blues did a nice job of buttoning things up and played a good road game. The Blues got a lot of clear looks and good chances, probably more than they should have given they were playing their third game in four nights, and the Flames were particularly leaky in this game at key times. (Markstrom wasn’t at his best, but he wasn’t the reason they lost.)
The Flames found some desperation late in the game, but it wasn’t enough.

Milan Lucic was all over the place in this game, in a good way. He was moving well. He was throwing hits. He generated a ton of shots, scoring chances and general chaos in the offensive zone.

It’s hard to argue against that fourth Blues goal. The Flames had some iffy defensive coverage at times in this game, and seemingly forgetting who was supposed to be covering Walker on the go-ahead goal was prime among them.

Calle Jarnkrok was a late scratch after taking warm-up due to a non-COVID illness. Ritchie slid into the lineup on the fourth line and Trevor Lewis played on the third line between Dillon Dube and Blake Coleman.
With Sean Monahan out for the season, Chris Tanev inherited his alternate captain’s A.

The Flames (40-19-9) are headed back on the road. They start a four game road trip on Monday night with a rematch against the Los Angeles Kings. Beware: it’s an 8:30 p.m. MT start.
Via Pat Steinberg: As of this writing, the Flames’ magic number to clinch a playoff berth is now 8 – any combination of 8 Flames wins or Vegas losses clinches a post-season spot for Calgary.