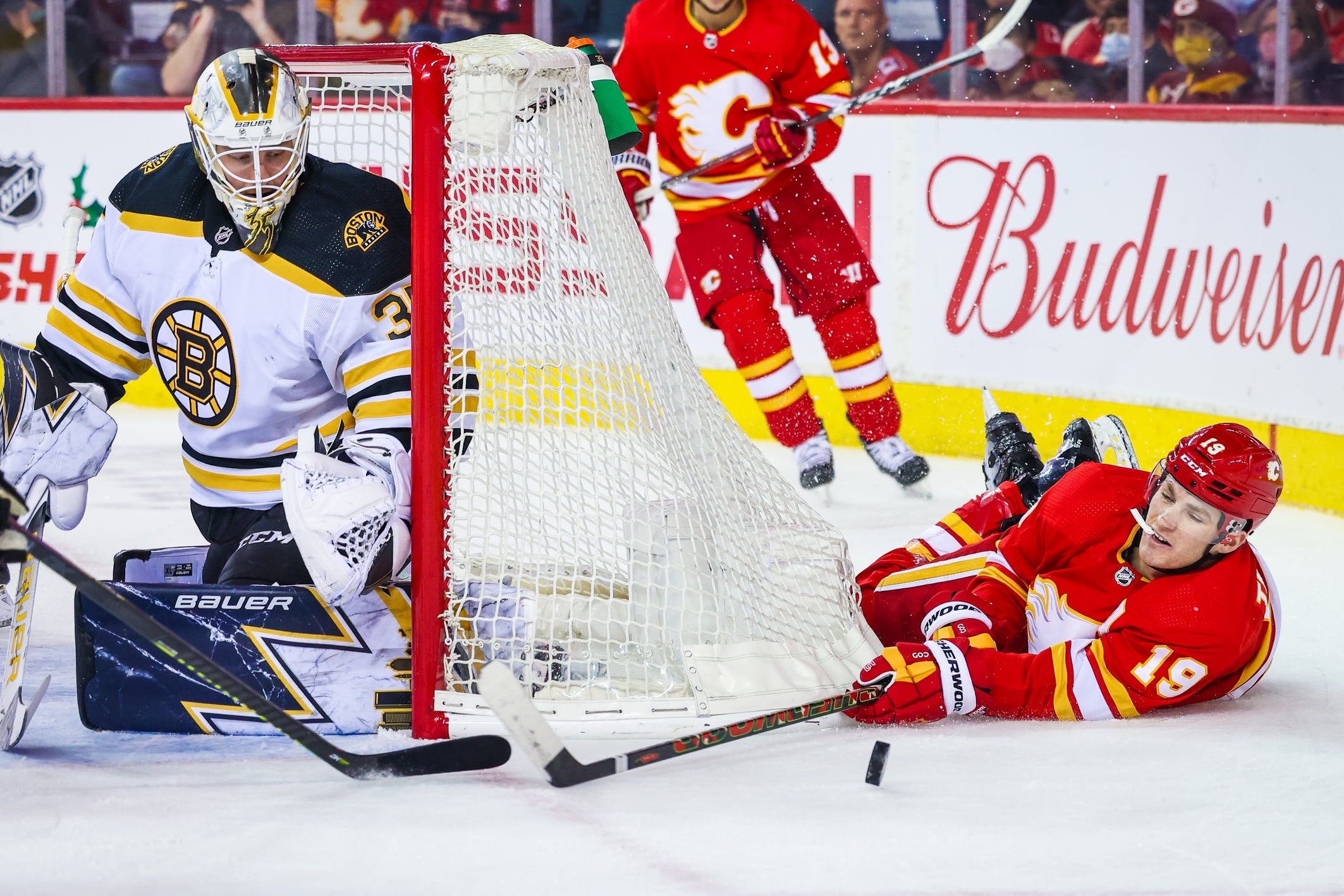 By Ryan Pike
11 months ago
The Calgary Flames faced their third fairly big test of the past week on Saturday night, hosting the talented, structured Boston Bruins. The Flames weren’t all that bad, but the details of their game were lacking (and came back to haunt them) en route to a 4-2 loss to the Bruins.

The first period was fairly even. The Flames had more scoring chances and shots, but Boston arguably had the more dangerous chances.
The Bruins managed to open the scoring late in the period on a fairly innocent-looking play. Connor Clifton carried the puck into the Flames’ zone and, near the edge of the face-off circle, fired a shot towards the Flames net. The shot seemed to catch Jacob Markström off-guard, and it beat him short-side (on his glove side) to give Boston a 1-0 lead.
Shots were 15-7 Flames (13-7 Flames at five-on-five) and scoring chances 15-5 Flames in the first period.
The Bruins added a couple more goals in the second period.
David Pastrnak skated into the Flames zone looking to create a scoring chance, but Rasmus Andersson did a great job staying with him with man-to-man coverage and backing him off from his rush. However, Pastrnak got a shot off and teammate Brad Marchand was left unattended in front of the Flames net, allowing him to make a nifty redirect of the puck past Markström to make it 2-0 Bruins.
Later on, Sean Monahan’s line was stranded on the ice after an icing. Boston put their top line back out and they managed to get a scoring chance (which missed the net), then retrieve the puck and set up Charlie McAvoy for a point shot through some traffic that beat Markström to make it 3-0 Bruins.
But the Flames answered back, finally scoring a power play goal (for the first time in five games). Rasmus Andersson’s point shot was deflected (and slowed down) by a Boston defender, glancing over to Matthew Tkachuk at the side of the crease. Linus Ullmark was caught unaware by this a bit, expecting a faster shot, and that allowed Tkachuk to shuffle the puck into the open net to cut the Boston lead to 3-1.
Shots were 16-8 Flames (8-7 Bruins at five-on-five) and scoring chances 6-4 Bruins in the second period.
Boston added a fourth goal early in the third period off a combination of bad rebound control and some iffy defensive play surrounding Markström’s crease. Trent Frederic came into the Flames zone and Markström made a stop on his shot. But he couldn’t corral it, and the defenders couldn’t seal off the area around his net, allowing them two more whacks at it, eventually ending with Curtis Lazar scoring to make it 4-1 Boston.
The Flames cut the lead to 4-2 with 95 seconds left in regulation, as Milan Lucic banked the puck in off Sean Monahan’s skate. But that was as close as the Flames got.
Shots were 12-11 Bruins (9-7 Bruins at five-on-five) and scoring chances 9-6 Flames in the third period.

Well, the good news is the Flames had puck possession and put a lot of shots on net. The bad news is while they had zone time at even strength, they didn’t do enough with it. Boston had more of the dangerous chances, and the Flames made too many key defensive mistakes at key times.
Yeah, Markström wasn’t his usual Vezina-calibre self on this evening. Depending on your perspective, the first and fourth Boston goals were on him to some degree. But the Flames allowed Boston to get too many shots away when they really didn’t need to allow them: how does Clifton get that first shot away uncontested, or how does Pastrnak get that shot off on Marchand’s goal? (Or how is Marchand allowed to hang out where he was without somebody tying him up?)
The defensive details just weren’t close to where they needed to be for the Flames. (Offensively, there were also way too many passing sequences that died a death in the neutral zone.)

Let’s give a joint award to the line of Blake Coleman, Andrew Mangiapane and Mikael Backlund. They didn’t score, but they generated a ton of shots and scoring chances.

The Flames were chasing all game, but the goal that put them down 3-0 really seemed to quiet the building for awhile.

The Flames saluted Milan Lucic, playing his 1,042nd NHL game, for reaching the 1,000 game plateau last season. (They did the traditional silver stick ceremony last season without fans.)
This was the ninth game this season that the Flames have allowed the first goal. They’re 2-4-3 when that happens.

The Flames (15-7-6) are headed back on the road! They headed to Chicago on Monday for the first of a back-to-back set. (They’re in Nashville on Tuesday.)