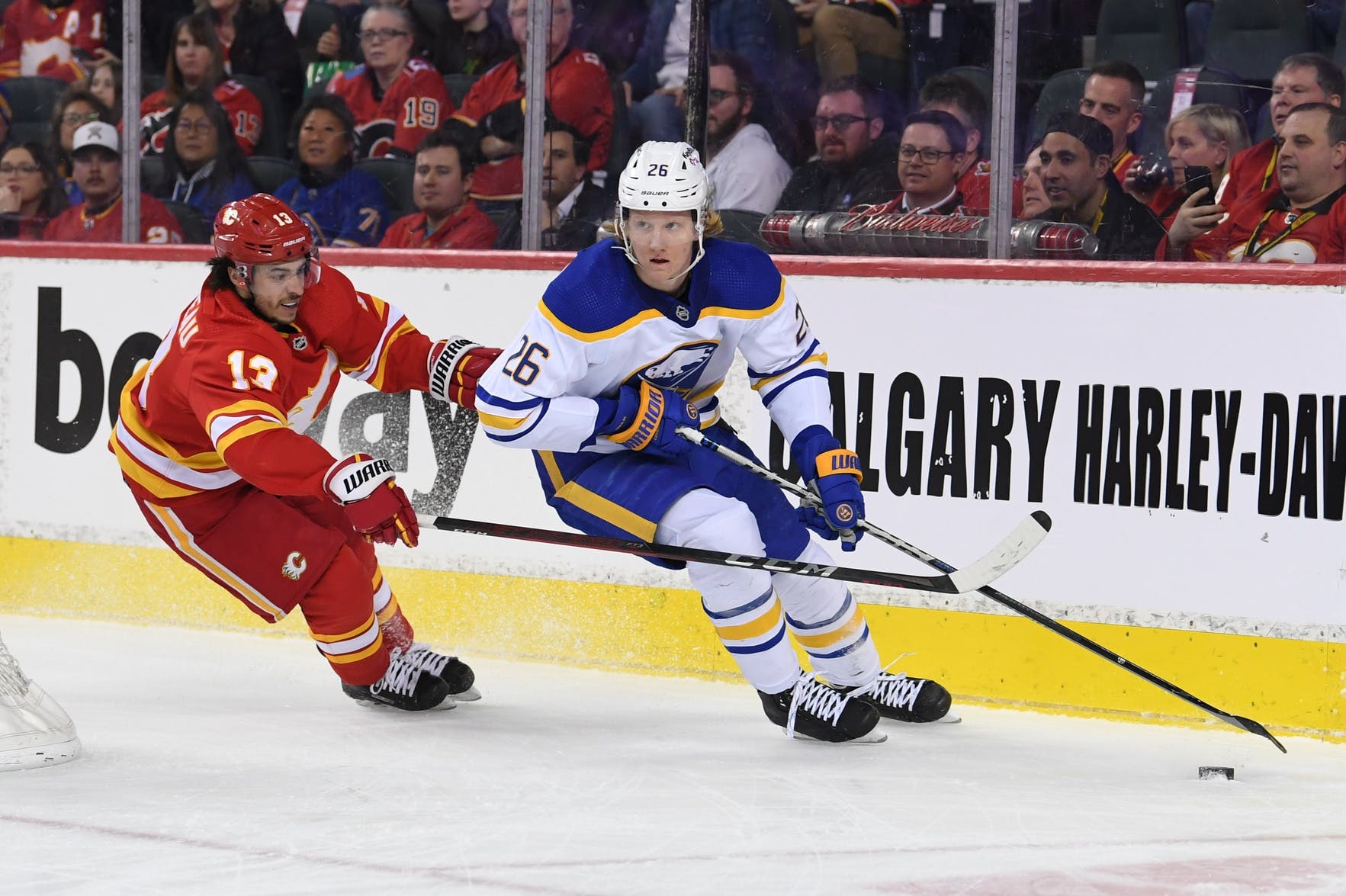 By Ryan Pike
8 months ago
The Calgary Flames welcomed the Buffalo Sabres to the Saddledome on Friday night. The Flames were not sharp offensively. The Sabres were pretty good defensively. This combination produced a game that was fairly dull at times, with big saves at either end the only real highlight reel material until late in the third period.
The Flames lost 1-0 in overtime to Buffalo.

The opening period was pretty clunky. Buffalo was content to stick to their structured defensive game given they were playing their second game in as many nights. Meanwhile, the Flames struggled to execute with the puck and couldn’t really generate a ton of dangerous looks.
Shots were 7-6 Sabres (6-5 Sabres at five-on-five) and scoring chances 5-4 Flames in the first period.
The Flames were just as sloppy in the second period, but Buffalo seemed more ready to jump up into the rush and use those sloppy moments to create scoring chances. As a result, the Flames saw a lot of good scoring chances against and Jacob Markstrom had to be very sharp.
At the other end, Dustin Tokarski robbed Calle Jarnkrok off a great pass from Andrew Mangiapane.
Shots were 10-8 Sabres (9-7 Sabres at five-on-five) and scoring chances 9-2 Sabres in the second period.
The third period was more of the same, although the Flames pressed more than they did in the earlier periods and had some good chances – the best one was arguably a Johnny Gaudreau breakaway chance that he couldn’t bury.
Shots were 12-10 Sabres (10-10 at five-on-five) and scoring chances 13-4 Flames in the third period.
This one went to overtime. After some back-and-forth chances, Markstrom went to play the puck but whiffed on it, and Dylan Cozens grabbed the puck and scored on the open net to give the Sabres a 1-0 victory.

Give the Sabres credit: they play a really effective road game, using structure to bottle up the Flames in the offensive zone and jumping on any puck-handling gaffes the home side made – not just on the game-winner, but throughout.
But the Flames played into Buffalo’s style, playing one of their sloppier puck-handing games in all three zones of the season.

Markstrom was superb, aside from the game-winner.

The overtime goal definitely stands as the turning point in this one.

The Flames were without Erik Gudbranson for the first half of the second period as he got repairs after taking a stick to his mouth area in the late first period. Post-game, head coach Darryl Sutter noted that it took them awhile to find a doctor to stitch Gudbranson up.
Recent trade acquisition Calle Jarnkrok made his Flames debut against Buffalo.

The Flames (37-16-8) head to Vancouver immediately. They visit the Canucks on Saturday night in the late game on Hockey Night in Canada.