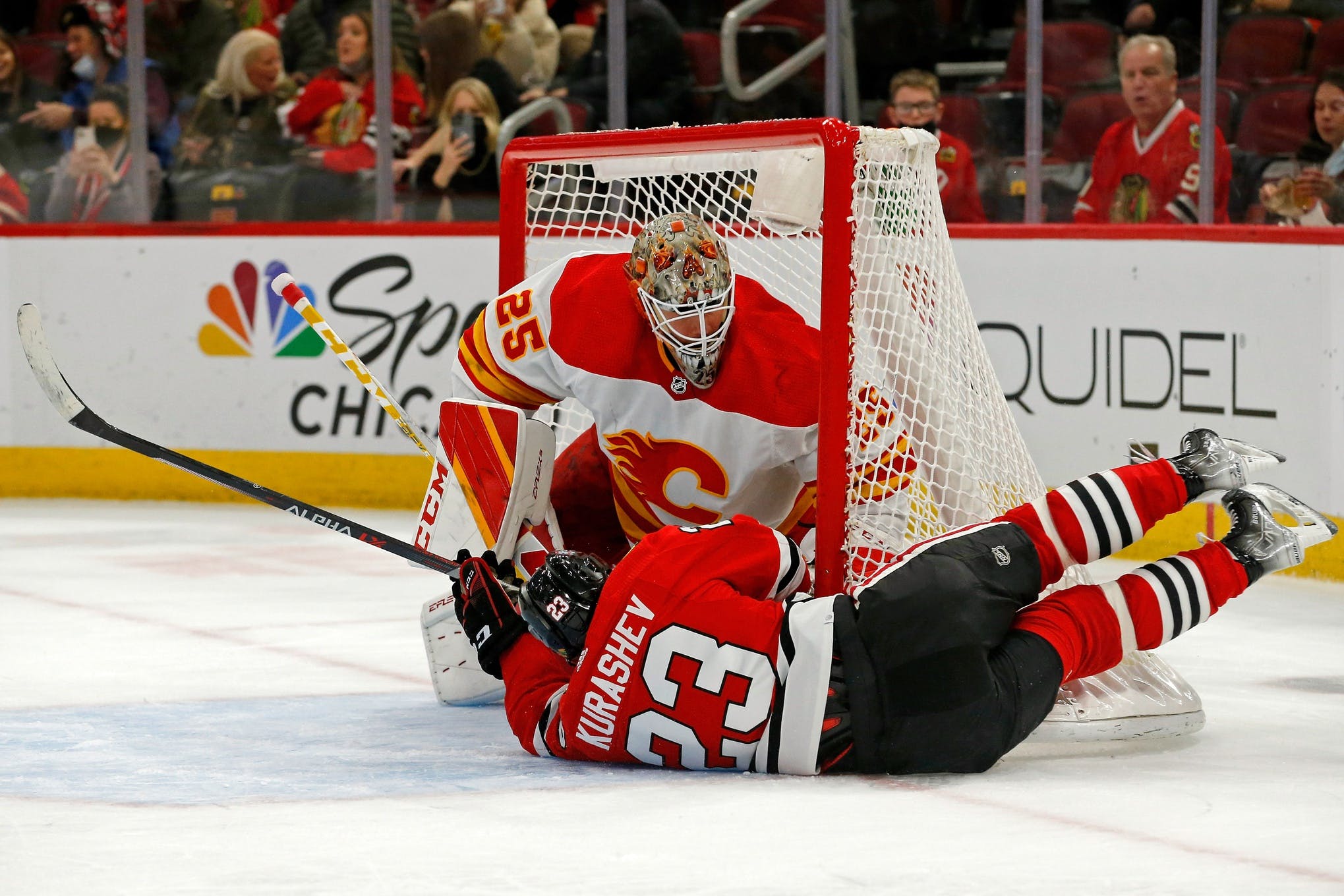 By Ryan Pike
10 months ago
The Calgary Flames began a four game road trip on Sunday night, starting it off with a visit to the Chicago Blackhawks. The Flames were a bit defensively shaky at times, as they were against Seattle, but they looked better as the game wore on.
The Flames skated to a 5-1 victory over Chicago to begin their road trip with two points.

Chicago took advantage of some defensive shakiness by the Flames early and took the lead. The Flames lost a couple puck battles and weren’t able to race back into their defensive positions. That allowed Patrick Kane to find Alex Debrincat with a nice pass (which was buried with a quick shot) to give Chicago a 1-0 lead.
But the Flames answered back before the end of the period. Noah Hanifin pinched from the point to keep an offensive play alive, skating down deep and passing across the zone to Johnny Gaudreau. Gaudreau put the puck into the slot area in time for a drive-by deflection by Matthew Tkachuk to tie the game at 1-1.
Shots were 11-6 Chicago (7-6 Chicago at five-on-five) and scoring chances 11-6 Flames in the first period.
The Flames took the lead on the power play in the second period. Sean Monahan drove the net from the wing and passed over to Elias Lindholm in the slot. Lindholm had time and space to get a shot off and, lo and behold, he buried the puck past Anton Soderblom to give the Flames a 2-1 advantage.
The Flames made it 3-1 later in the period shorthanded. Mikael Backlund had a shorthanded breakaway but couldn’t bury it. A little later, though, Blake Coleman stole the puck in the Chicago zone on the forecheck, then fed Trevor Lewis at the side of the net. Lewis went backhand on Soderblom to give the visitors a 3-1 lead.
Shots were 26-9 Flames (10-8 Flames at five-on-five) and scoring chances 11-4 Flames in second period.
The Flames withstood Chicago’s push in the third period. Dillon Dube failed to score on a penalty shot, but Oliver Kylington scored a late empty net got to make it 4-1 Flames. Johnny Gaudreau added another goal, with Soderblom in net, to make it a 5-1 Flames victory.
Shots were 11-10 Chicago (10-8 Chicago at five-on-five) and scoring chances 7-6 Flames in the third period.

They started off shakily, but they got better and found their legs as the game went on. They were easily the better club for 50 of this game’s 60 minutes and managed to score in virtually every game situation.

We’re going with Tkachuk, who got on the scoresheet and was all over this game, generating a ton of good looks for his team.
Stick-taps to Jacob Markström, who was really good early on as the Flames settled down.

How about the entire second period? The Flames were excellent and made Chicago look very much like a team that had played (and lost handily) the day before.

This was the 600th career NHL game for undrafted defender Chris Tanev.
Gaudreau’s three points gave him 530 points with the Flames, passing Guy Chouinard for 7th all-time on the franchise’s leaderboard.

The Flames (17-7-6) are off to scenic Florida. They visit the Florida Panthers on Tuesday evening.