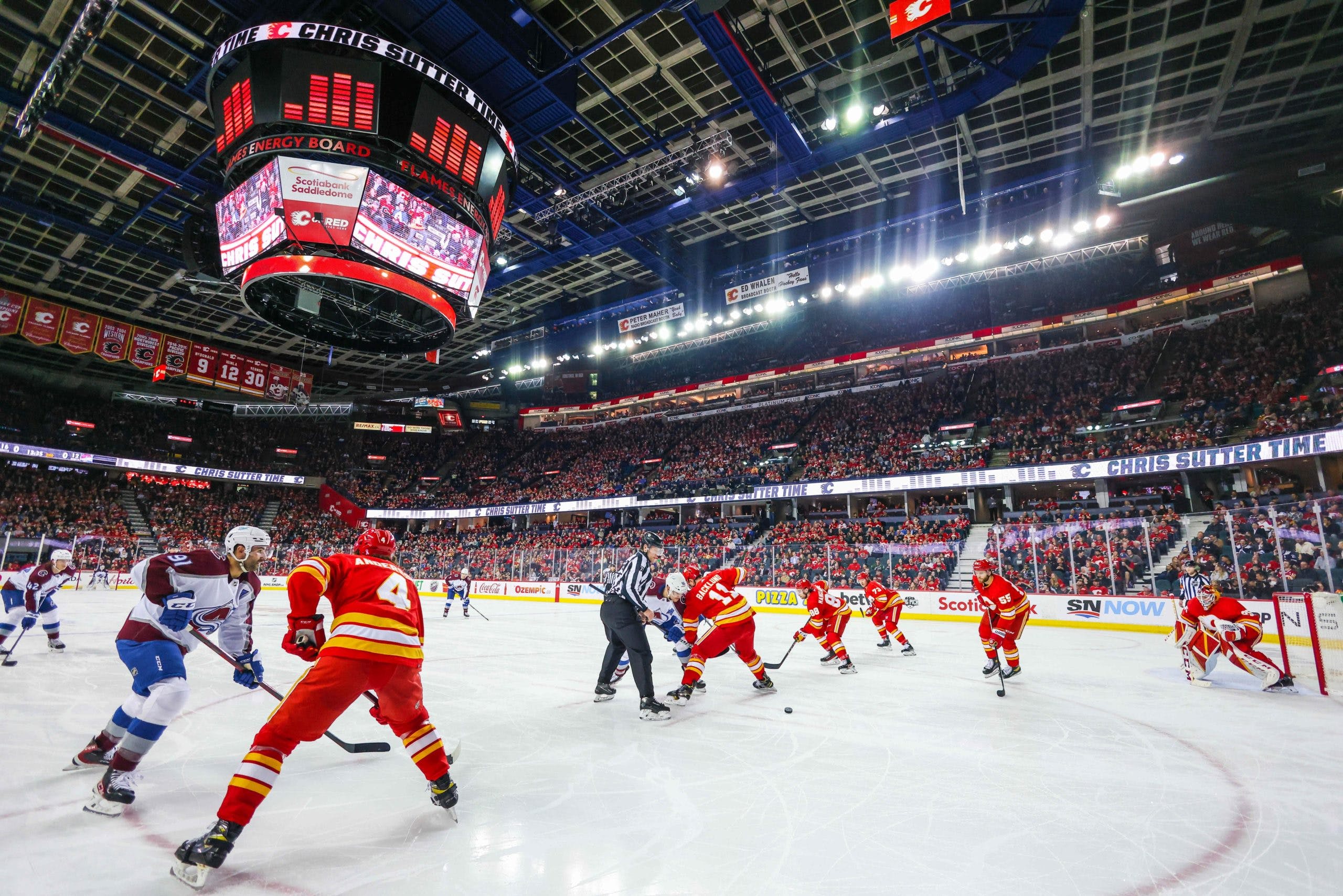 By Ryan Pike
10 months ago
The Calgary Flames welcomed the Colorado Avalanche to town on Tuesday night in a highly-anticipated clash of division leaders. Both teams were buttoned-up at five-on-five for the most part, but the Avalanche made slightly more hay on the power play than the Flames did.
The Flames dropped a tight 2-1 loss to the Avalanche in a game where neither team scored at even strength.

The opening 20 minutes were low-scoring and low-event, but both were more of a product of both teams trying to sit back and see if the other team would make a mistake. We would compare the battle between the teams to high-level chess: a lot of things were happening, but from an action perspective there wasn’t a whole lot going on.
Shots were 13-9 Flames (9-8 Flames at five-on-five) and scoring chances 9-6 Flames in the first period.
The zero-zero deadlock was snapped midway through the second period. Nikita Zadorov drew a slashing penalty, followed 18 seconds later by Rasmus Andersson drawing a hooking penalty. The Flames had 1:42 of a two-man advantage and took advantage. After a bit of player movement, and passing, and more player movement to get a good one-timer set-up, Tyler Toffoli buried a feed from Rasmus Andersson from Darcy Kuemper’s right to give the Flames a 1-0 lead.
But a little later, Colorado got a power play and they cashed in (on their only shot). Milan Lucic knocked down Mikko Rantanen on a Colorado cycle play, giving Colorado the power play. The Flames killed off 1:58 of the advantage – Colorado missed the net a lot on a few nice-looking set plays – but with two seconds left on Lucic’s penalty, Cale Makar fired a shot from Jacob Markstrom’s right that found a way through and into the net. (Valeri Nichushkin was given credit, but it’s not entirely clear from the replays if he got a stick on it or if it bounced off a piece of Markstrom’s equipment.) Either way, that made it a 1-1 hockey game.
Shots were 17-7 Flames (9-6 Flames at five-on-five) and scoring chances 4-2 Flames in the second period.
The game opened up a bit in the third period, with the two teams exchanging rush chances: Colorado got more chances and higher quality chances but Markstrom was very solid.
Elias Lindholm took a tripping minor in the Flames zone and the Avalanche made the Flames pay. After a couple quick passes, Mikko Rantanen made a crisp pass to Nichushkin at the side of the net for a quick redirect to give the Avalanche a 2-1 lead.
The Flames pulled Markstrom for the extra attacker but weren’t able to solve Kuemper.
Shots were 15-14 Flames (11-9 Avalanche at five-on-five) and scoring chances 10-4 Avalanche in the third period.

This game was basically a saw-off at five-on-five, with Colorado getting better as the game wore on. The difference in the game was special teams, and Colorado’s skill players executed on their power play slightly better than Calgary’s did.

Markstrom was really solid in all three periods, especially in the third period where he faced a lot of really good scoring chances as the game opened up a bit.

The Flames (40-18-8) return to game action on Thursday night when they host their old divisional rivals the Los Angeles Kings.
Via Pat Steinberg: As of this writing, the Flames’ magic number to clinch a playoff berth is now 8.5 – any combination of 8.5 Flames wins or Vegas losses clinches a post-season spot for Calgary.