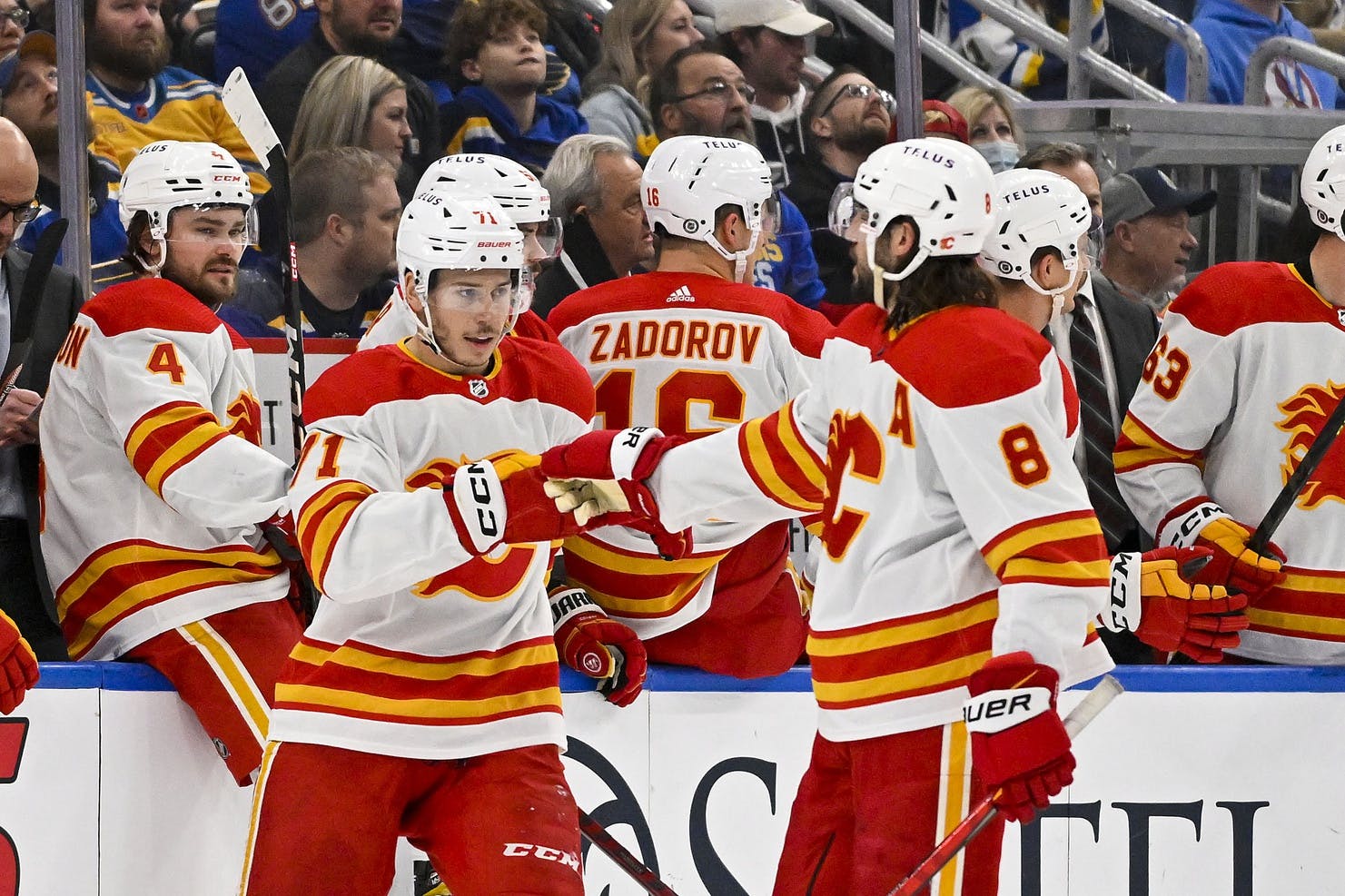 By Ryan Pike
22 days ago
Be sure to check out NHL betting site Betway for the latest Flames game day odds!
The Calgary Flames returned to the Enterprise Center in St. Louis to close out their season series with the Blues on Thursday night. It was a low-scoring, low-event game before the Flames’ forecheck seemed to wear down the home side.
Some big saves from netminder Dan Vladar and key goals at key times paced the Flames to a 4-1 victory over St. Louis.

This game had an interesting vibe: it had all the tight-checking of a playoff style game, but all of the intensity of the second game between two teams in a week. That is to say: it was fairly low event, pretty low scoring, and offensive chances were at a premium.
The Flames opened the scoring as the second period began to wind down. The Blues had a good look in the Flames’ zone, with defender Calle Rosen pinching down into the slot but Chris Tanev breaking the play up with a block. The Flames cleared out the zone and headed up ice with numbers, with a nice pass from Trevor Lewis springing Nazem Kadri into the offensive zone on a two-on-one with Walker Duehr. Kadri fed Duehr and Duehr beat Thomas Greiss stick-side for his first career NHL goal to make it 1-0 Flames.
(Duehr had an odd-man chance earlier in the period, but shot too high, so it was a nice bit of adjusting from a young NHLer.)
The Blues tied things up early in the third period, though. Like, very early. Like, 20 seconds into the period. Noel Acciari’s attempted shot from the slot area rolled off his stick and went right to Jake Neighbours, whose shot from a wider angle fooled Dan Vladar – who seemed set for Acciari’s shot from right out front and wasn’t set for the wider shot – to tie the game up at 1-1.
But the Flames kept at it and managed to retake the lead midway through the period. Dillon Dube came into the Blues’ zone on his own as everybody else changed up. The Flames lost the puck on an attempted cycle down low, but kept battling. Blues forward Robert Thomas attempted an outlet pass up ice, but it ricocheted off Tyler Toffoli and Elias Lindholm’s sticks right to Dube in the slot area. He sniped a wrist shot past Greiss to make it 2-1 Flames.
After that, the Flames began to pull away as the period wore on. First, a good forecheck by the third line (with Mikael Backlund and Andrew Mangiapane crashing and banging below the goal line) led to another ugly Blues turnover below the dots in their end, and Blake Coleman deposited that into the net to run the lead to 3-1 Flames.
Dube added an empty netter – with Greiss watching from the Blues’ bench with just over three minutes remaining – to extend the lead to 4-1 Flames.
That’s how the game ended.

The Flames out-shot the Blues in all three periods (and 40-26 overall). Their forecheck was pretty good for much of the game and was really good in the third period, bouncing back nicely after Neighbours’ game-tying marker early in that period. Heck, they scored three goals in this game as a direct result of turnovers that the team generated – one in their own zone leading to Duehr’s goal off the rush, and two in the Blues’ zone off smart forechecking.
Their goaltending was really good when defensive miscues happened, while the Flames generated enough scoring chances to keep the Blues on their toes. Via Natural Stat Trick, chances were 29-19 at five-on-five and high-danger chances were 13-5 – both in favour of Calgary.
The power play was a non-factor, but only had one advantage, while their penalty kill was full marks on three Blues advantages – smart, structured and aggressive.
The big difference between Tuesday’s overtime loss and Thursday’s regulation win? The Flames got the big stops they needed from Vladar when they needed big stops, and they scored big goals when they needed them.

It’s gotta be Vladar. He wasn’t as busy as his counterpart Greiss was 200 feet away, but he had to make a ton of big stops. When the game was close, Vladar was excellent.
And stick-taps to Duehr for his first NHL goal and Dube for a multi-goal game.

Dube’s go-ahead goal, a product of some great forechecking, really derailed the Blues’ structured, poised game. They got jumpy after that, and the Flames took advantage.

The Flames are now 10-5-6 since Dec. 1.
The Flames have captured four of a possible six points so far on this road trip, with a 1-0-2 record so far. They have two games remaining on their trip, in Dallas on Saturday and Nashville on Monday.

The Flames (20-14-9) are headed south to Texas. They face the Dallas Stars in a noon-hour matinee on Saturday afternoon.
News
Recent articles from Ryan Pike