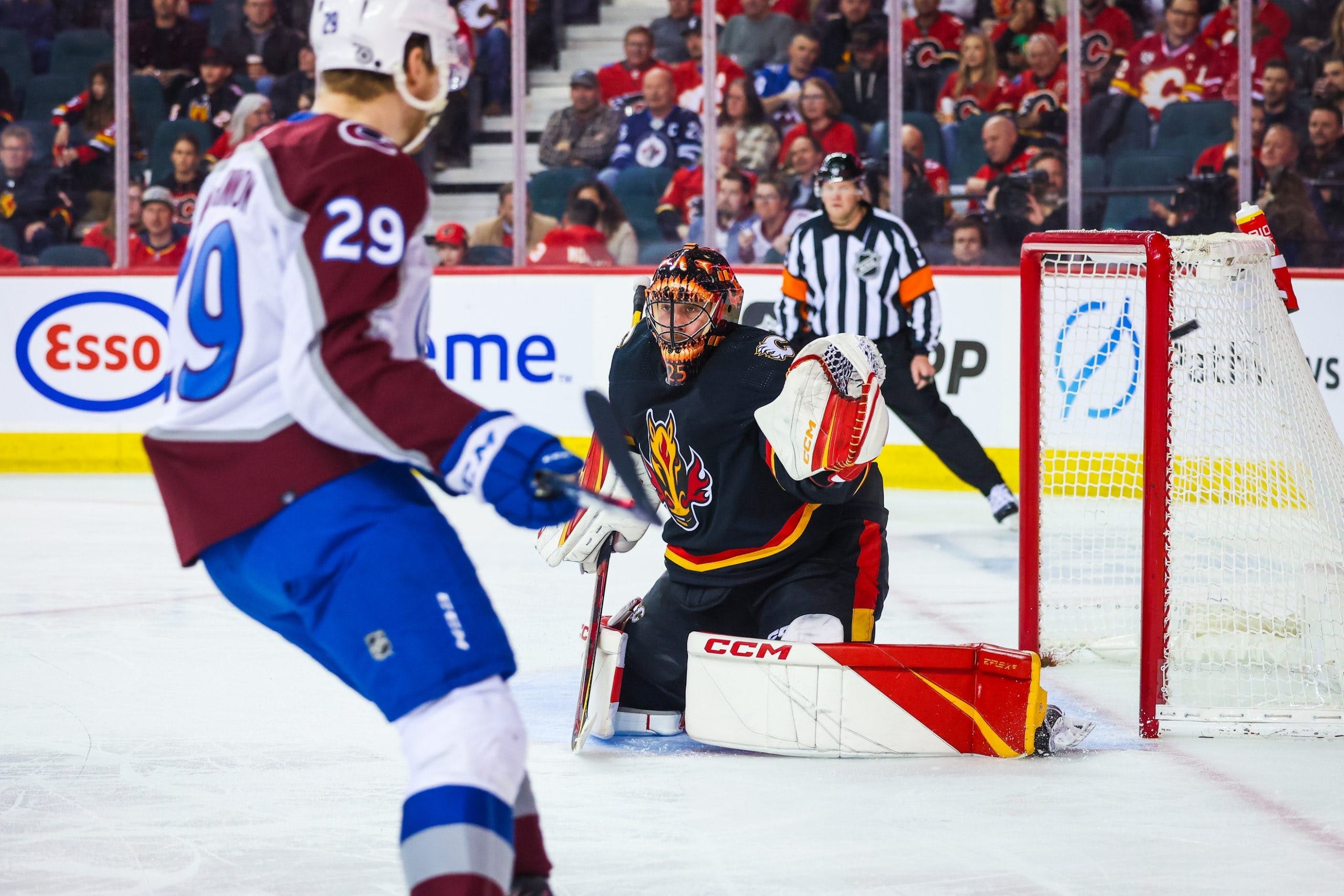 By Ryan Pike
7 days ago
Be sure to check out NHL betting site Betway for the latest Flames game day odds!
The Calgary Flames returned home after five games on the road on Wednesday evening, as they hosted the Colorado Avalanche. It went poorly.
The Flames were scored on three times in the first period and spent the rest of the evening chasing en route to a 4-1 loss to the Avalanche to kick off a four game home-stand.

The Avalanche were sharp and fast in the opening 20 minutes, and they opened the scoring just over six minutes into the game. Jacob Markstrom made a stop on an Erik Johnson shot, and Chris Tanev began to transition the puck. His pass to Jonathan Huberdeau was disrupted by a Devon Toews stick in the passing lane. The puck was grabbed by J.T. Compher, who fed Mikko Rantanen for a shot that beat Markstrom short-side to give the visitors a 1-0 lead.
Five minutes later, the Avalanche struck again. This time, the Avalanche induced a turnover at their own blueline and Nathan MacKinnon led an odd-man rush up the ice. He put a great lateral pass into the slot area for a redirect from Arturri Lekhonen, and his redirect bonked in between Markstrom’s legs to give the Avalanche a 2-0 lead. (The puck blooped out of the net very quickly, so this goal was briefly reviewed before being declared far and wide as a goal.)
A couple minutes later, the Avalanche scored again. Michael Stone was called for interference on a late hit on Logan O’Connor. 55 seconds into the power play, a MacKinnon pass for Rantanen wobbled wide, but it bounced off the end boards and right to Lehkonen at the far post. Lehkonen quickly chipped the puck past Markstrom to give the Avalanche a 3-0 lead.
The Flames got a few decent looks in the second period, but the Avalanche defended fairly well and seemed content to wait for the Flames to make a puck-handling miscue and clear the zone.
The Flames finally got on the board in the early third period. The power play cycled the puck around at the point, where Tyler Toffoli took advantage of an Elias Lindholm screen and blasted the puck past Alexander Georgiev – just inside the far post – to cut the Colorado lead to 3-1.
The Flames shuffled their lines late and tried to get something going, but they just didn’t have enough in the tank to get much out of this contest. Nikita Zadorov hacked the stick out Rantanen’s hands late in front of an empty net, and Colorado was awarded a goal.
The Avalanche held on for a 4-1 victory.

Were the Flames awful? Nope. Aside from a few lapses here and there, everybody was in the right spots and doing close to the right things. But they were a bit clunky. Slow. Predictable. The Flames generally go as their breakouts do, and they had challenges with Colorado disrupting their attempts to leave their own zone. They got better as the game went on, but Colorado defended well and just ran out the clock.
The Avalanche were the better team in terms of their details. They won battles. They executed well on offensive plays. They did a good job getting in the way of the Flames’ attempts at creating things.

Let’s give it jointly to the line of Andrew Mangiapane, Mikael Backlund and Blake Coleman. They were consistently noticeable and generated the club’s most dangerous chances.

The Avalanche’s second and third goals were scored just a couple minutes apart. The Flames had lapses leading to an odd-man rush and a goal, a questionable penalty, and then some bad reads on the penalty kill leading to another goal.
Once they got down by three, it seemed like the air was completely let out of the building.

The Flames wore their black third jerseys in this game. Their healthy scratches were Jakob Pelletier and Connor Mackey.

The Flames (21-16-9) are back in action on Saturday afternoon for a matinee against the Tampa Bay Lightning.
News
Recent articles from Ryan Pike