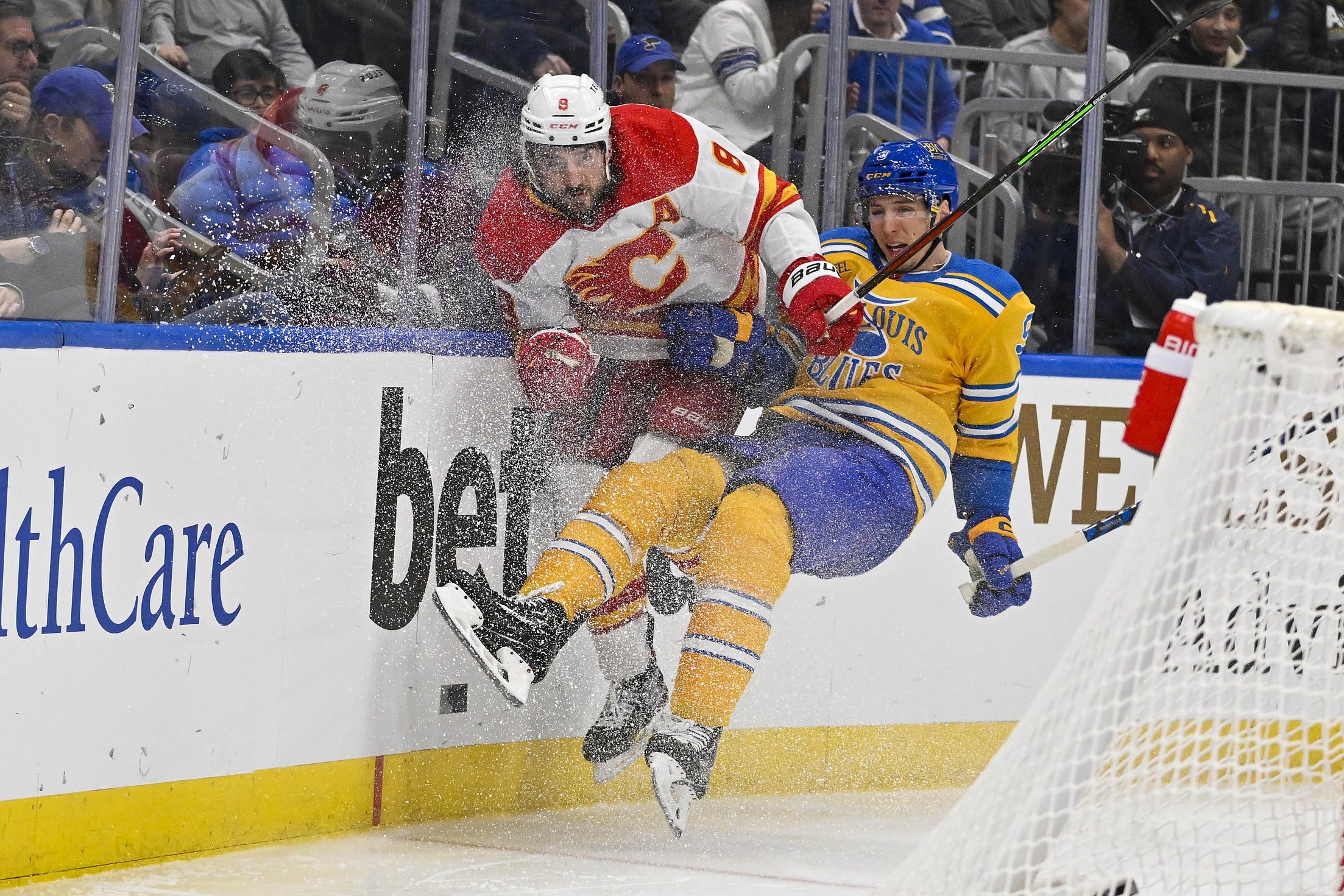 By Ryan Pike
15 days ago
Be sure to check out NHL betting site Betway for the latest Flames game day odds!
The Calgary Flames played two really solid periods of hockey against the St. Louis Blues on Tuesday night. After giving up an early power play goal, they scored three goals to give themselves a comfortable 3-1 lead heading into the third period.
But some mistakes across the board – goaltending, defensive coverage and offensive execution – saw that lead disappear, and the Flames had to settle for the regulation point, as they lost to the Blues 4-3 in overtime.

The opening few minutes of this game featured a lot of sloppy hockey, a bunch of penalties, and a Blues goal. The Flames got an early power play, but took a pair of successive penalties that gave the Blues a short four-on-three advantage.
A few seconds after Nazem Kadri’s penalty expired, dropping the Blues to a “regular” power play, Chris Tanev inadvertently deflected a Pavel Buchnevich cross-slot pass off his stick and past Jacob Markstrom to give the Blues a 1-0 lead.
The Flames were back on their heels a bit and the Blues defended reasonably well, but the visitors eventually found some momentum, made some nice passes, and tied things up.
Jonathan Huberdeau’s line hit the Blues zone with numbers. The Blues played the zone entry a bit aggressively, which allowed Huberdeau to find Nazem Kadri on the wing with a pass. Kadri then fired a great pass to Milan Lucic at net-front area and he chipped the puck past Jordan Binnington to tie the game at 1-1.
A couple minutes later, the Flames scored again. The Huberdeau line had possession and cycled the puck, continually winning battles and moving the puck around. They had the puck long enough that a couple players were able to change on the fly, leading to a Nikita Zadorov point shot that was deflected in the slot area by Mikael Backlund past Binnington to make it 2-1 Flames.
First period shots were 13-9 Flames (12-8 Flames at five-on-five) and five-on-five scoring chances were 9-6 Blues (high-dangers were 3-3).
The Flames added to their lead early in the second period. They had a rush chance broken up, and then the zone got clogged up down low with a bunch of players battling for possession. The Flames won that battle, quickly cycled the puck behind the net, where Noah Hanifin (pinching way down into the zone) found Andrew Mangiapane in the slot, all alone. Mangiapane took the pass in his skates, booted it up to his stick, and beat Binnington to give the Flames a 3-1 lead.
The Flames had several good scoring chances as the period went along, but couldn’t score again in the second period.
Second period shots were 12-9 Flames (10-9 Flames at five-on-five) and five-on-five scoring chances were 12-8 Flames (high-dangers were 6-5 Flames).
But the Blues battled back early in the third period, scoring two goals just 28 seconds apart to tie things up.
First, Markstrom stopped a Steven Santini shot but left a rebound in the net-front area for Nikita Alexandrov to speed in and bat into the net five-hole to cut the Flames’ lead to 3-2.
Next, the Blues intercepted a puck high in the Flames’ zone. The Flames had tons of bodies between Jordan Kyrou and the net. But Kyrou fired a shot from above the circles that beat Markstrom glove-side to tie the game up at 3-3.
The Blues scored again a little after they tied the game, but the goal was waved off after the Flames had a successful coach’s challenge for being an off-side zone entry. (Robert Thomas briefly lost control at the blueline and over-skated the puck, leading to the off-side call.)
Neither team could score another goal in regulation.
Third period shots were 8-6 Blues (all at five-on-five) and five-on-five scoring chances were 7-3 Blues (high-dangers were 5-1 Blues).
This game required overtime to decide. Huberdeau turned the puck over in the offensive zone on an odd-man rush, lead to an odd-man rush the other way with Kyrou and Thomas facing Rasmus Andersson. Andersson seemed like he couldn’t choose between blocking the pass or challenging the shot, which gave Kyrou time to feed Thomas and his shot beat Markstrom to give the Blues a 4-3 victory.

They were pretty good in the first period in all three zones, and really good in the second period in all three zones. But they seemed incredibly jumpy once things started going against them in the early third period, and it felt like they only got the regulation point because of that successful coach’s challenge.
I wouldn’t go so far as to call the Flames fragile, but games sure have a way of swinging away from them in a hurry – this one sure did – and I’m not sure what that says about this veteran-laden hockey club right now.

Mangiapane had a multi-point game, so let’s give him the nod here.

The Flames saw a 3-1 lead evaporate within the first 2:48 of the third period. They never seemed to regain their swagger, in any zone.

St. Louis wore their Reverse Retro jerseys.
Walker Duehr dressed for his second career NHL game for the Flames, wearing #71. He wore #61 in his NHL debut last season. He played 12:56 and was quite good for the most part.

The Flames (19-14-9) are staying in St. Louis. They have a day off on Wednesday, then finish off their season series with the Blues on Thursday evening.
News
Recent articles from Ryan Pike