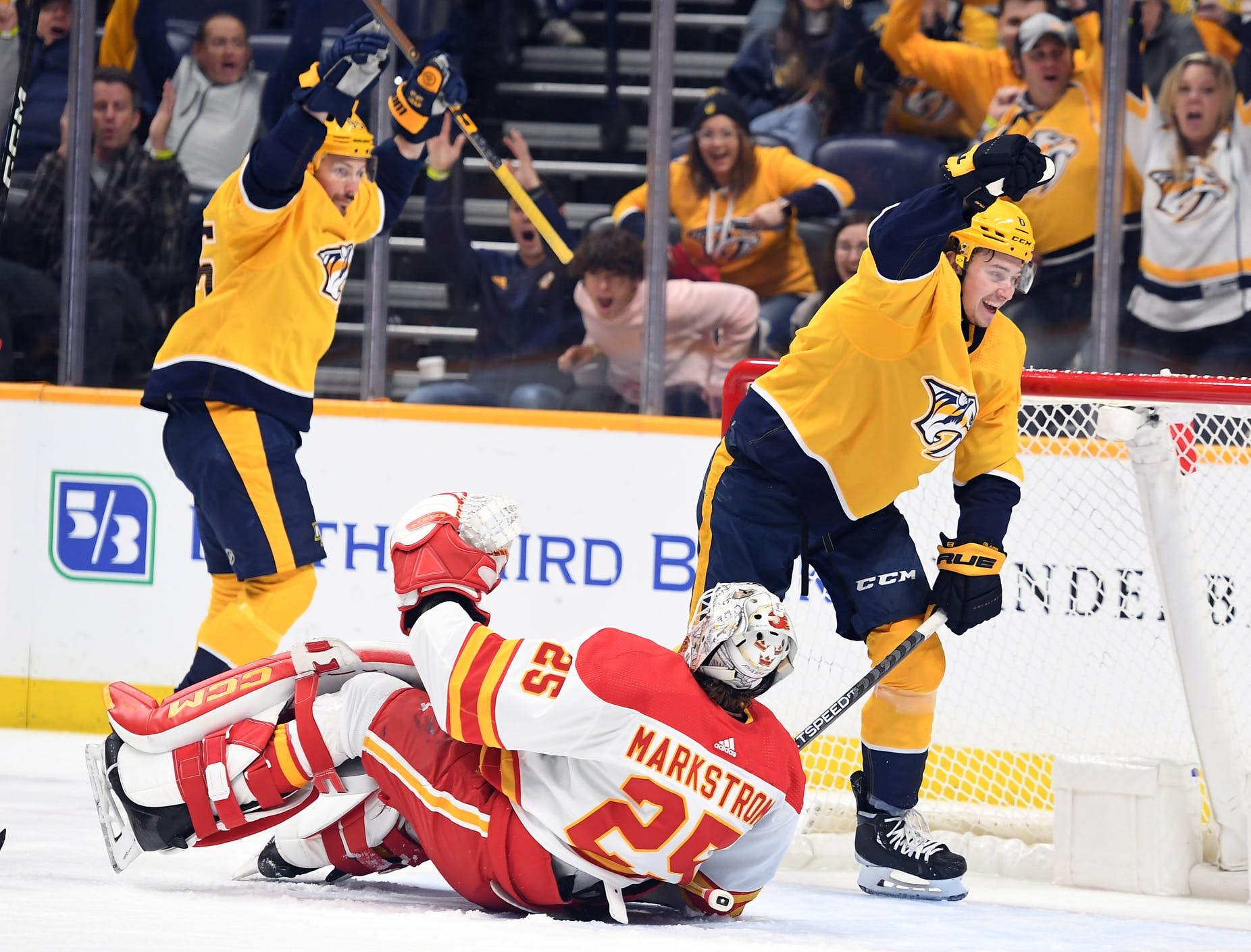 By Ryan Pike
10 days ago
Be sure to check out NHL betting site Betway for the latest Flames game day odds!
The Calgary Flames headed into Tennessee on Monday evening to finish off their five game road trip with a date with the Nashville Predators. The Predators were the better team for most of the game. The Flames were able to hang around, but just couldn’t muster enough timely offence to complete a comeback.
The Flames lost to Nashville by a 2-1 score to finish their road trip with a 2-1-2 record.

The Predators carried play for much of the first period, and cashed in with a goal midway through the first period. Nashville cycled the puck to the point, missed their first shot attempt, then regained the puck, cycled it back, and scored. Roman Josi’s blast from the point ricocheted off Nikita Zadorov (battling with Cody Glass in front of the net) and beat Jacob Markstrom to make it 1-0.
A little later, the Flames had a power play but could not cash in. (There wasn’t a ton of urgency, if we’re being honest.) The penalized player, Juuso Parssinen, joined the counter-attack rush as the Predators headed the other way. Markstrom made the initial stop, but Parssinen jammed in an errant puck right around the crease to give the home side a 2-0 lead.
The Predators controlled play for much of the second period, but the Flames hung in there, took advantage of a turnover caused by Blake Coleman, and got on the board late in the second period. The Flames counter-attacked off Coleman’s turnover creation, and Mikael Backlund fed Nikita Zadorov and Zadorov hammered the puck past Juuse Saros to cut the lead to 2-1 Predators.
The Flames thought they had the game tied up during a third period four-on-three power play, but the officials ruled that Tyler Toffoli kicked the puck past Saros. The goal was disallowed.
That’s as close as the Flames got. They had some late looks, but this game finished as a 2-1 Nashville victory.

Zadorov was interviewed by Sportsnet’s Ryan Leslie in the second intermission. Zadorov called the Flames’ performance “horrible,” and noted that the Flames were “slow” and “losing battles.” We’re not sure if we’re as sour on their overall effort as Zadorov was, but he’s not wrong.
The Flames were second-best in most game situations, and got out-battled and out-hustled by the Predators.

We’ve gotta go with Nazem Kadri. He didn’t hit the scoresheet, but he won face-offs, put a lot of pucks on net, and was noticeable and engaged all night long.

The Flames lost this one, but two distinct moments kept them in it:

The Flames scratched Connor Mackey and Jakob Pelletier for this game. Pelletier is still awaiting his first NHL appearance.

The Flames (21-15-9) are headed home. They host the Colorado Avalanche on Monday night.
News
Recent articles from Ryan Pike