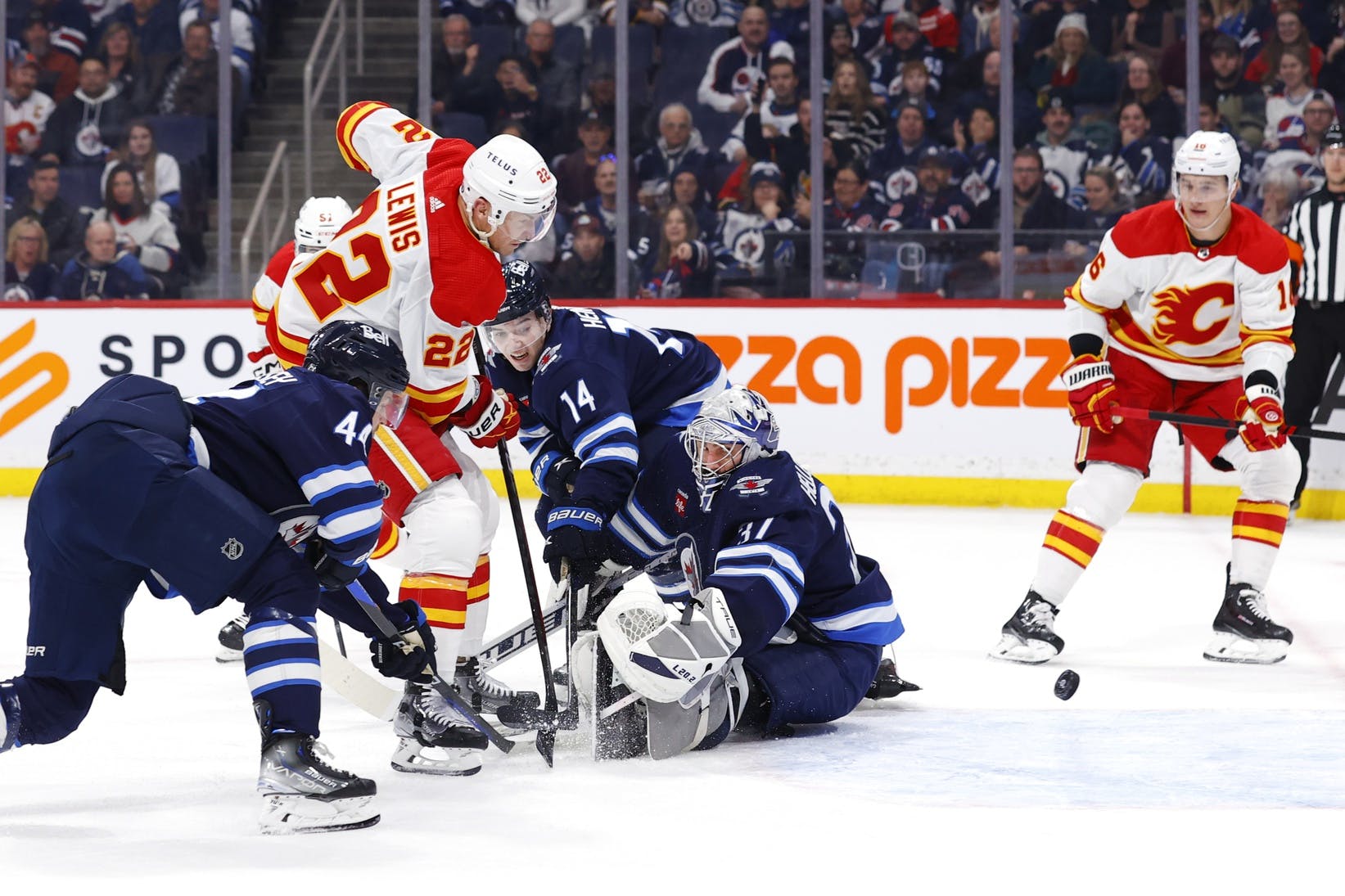 By Ryan Pike
30 days ago
Be sure to check out NHL betting site Betway for the latest Flames game day odds!
The Calgary Flames headed to Winnipeg on Tuesday night to play their first game of 2023. Fans were treated to a pretty entertaining, up-tempo hockey game with some excellent goaltending from Calgary’s Jacob Markstrom and Winnipeg’s Connor Hellebuyck.
In a really back-and-forth game, the Flames lose to the Jets by a 3-2 score.

Neither team scored in the first period. Each team had a power play, with both sides of Calgary’s special teams units looking sharp.
First period shots were 14-10 Flames (9-9 at five-on-five) and five-on-five scoring chances were 8-3 Flames (high-dangers were 1-1).
The second period was excellent hockey. Both Markstrom and Hellebucyk made big saves to keep the game close.
As the period began to wind down, though, the Jets took advantage of some layers of traffic in front of Markstrom to take the lead. The Jets cycled in the Flames’ zone and sent the puck to the top of the zone for Dylan DeMelo. DeMelo’s point shot was deflected by Brendan Dillon past Markstrom to give the Jets a 1-0 lead.
But the Flames scored late in the period to tie the game. Nikita Zadorov started a rush, springing Elias Lindholm’s line for a three-on-two rush. Zadorov came up the ice just behind that trio, though, and he received a pass from Tyler Toffoli and fired the puck past Hellebuyck to tie the game up at 1-1.
Second period shots were 11-6 Flames (7-3 Flames at five-on-five) and five-on-five scoring chances were 9-5 Flames (high-dangers were 3-2 Jets).
Midway through the third period, the Jets retook the lead off an awesome play in the offensive zone. The Jets got a bit of time in the offensive zone to set up. Josh Morrissey fired a pass to Kyle Connor in the slot area, who quick slapped it back to the high slot… where Morrissey was rushing towards in a pinch play. The Flames’ defenders seemed caught off-guard and Morrissey fired the puck past Markstrom to make it 2-1 Jets.
But about a minute and a half later, the Flames tied it up. A smart pass from Andrew Mangiapane and a Jets defending falling at the offensive blueline sent Mikael Backlund in on a breakaway. He went forehand-backhand and beat Hellebuyck five-hole to tie the game at 2-2.
But a little later, the Jets re-re-took the lead. The Jets got the puck into the Flames zone, cycled it to the point, and Sam Gagner made a nifty deflection in front of the net to get the puck past Markstrom. That gave the Jets a 3-2 lead.
The Flames pressed late, but a late penalty from Toffoli sapped a lot of their momentum (and time). Despite pulling Markstrom for the extra attacker, the Flames couldn’t get another one and lost 3-2.
Third period shots were 10-9 Flames (8-8 at five-on-five) and five-on-five scoring chances were 8-6 Jets (high-dangers were 3-1 Jets).

This game was excellent and the Flames went toe-to-toe with a really good Jets squad. The big difference here was that the Jets executed on their scoring opportunities a little bit better than the Flames did. In a game with a teeny, tiny margin between the two clubs, that was enough for the home team to eke out a one-goal win over the Flames.
But let’s be blunt here, folks: this was not a bad Flames performance. They found a way to lose, but in a tough building against a strong team, they out-shot and out-chanced the Jets. If they take this type of effort on the road for the remainder of the season, we like their chances.

Let’s give it to Markstrom. If he’s less sharp in the early part of the second period, this is a much different hockey game for the road team.
The Mangiapane, Backlund and Blake Coleman line was also very, very good.

We’ll cheat and go with two: Gagner’s go-ahead goal (a couple minutes after the Flames tied it up) was a goal that the Flames just couldn’t give up with how strong Hellebuyck was looking in the opposing net. They followed that up with a late penalty, which drastically hampered their ability to battle back.

Gagner and Backlund, a pair of first-rounders from the 2007 NHL Draft, scored in the third period.

The Flames (18-14-7) are headed home. They host the New York Islanders at the ‘Dome on Friday night.
News
Recent articles from Ryan Pike