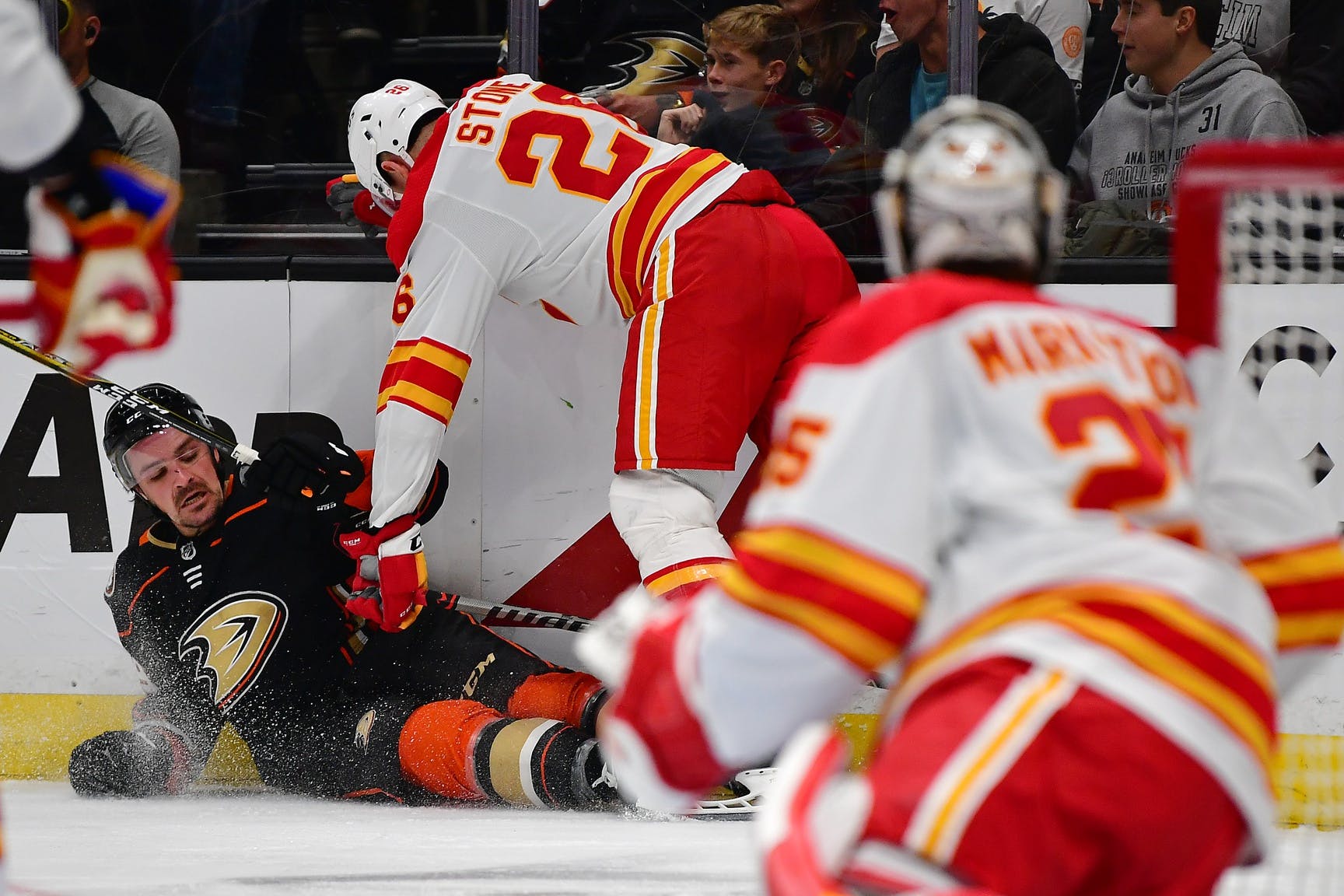 By Ryan Pike
1 month ago
Be sure to check out NHL betting site Betway for the latest Flames game day odds!
The Calgary Flames headed to the Honda Center on Friday night to finish off their pre-Christmas schedule against the Anaheim Ducks. The Flames wildly out-played the Ducks for large stretches of the game, but were offensively snake-bit at times.
But they found a key goal at a key time and beat the Ducks 3-2 in overtime. The win gives them seven of a possible eight points on their four game California road trip.

The Flames carried play early, registering the first eight shots of the game. One of those went in: off a nice bit of cycling in the Ducks zone, Michael Stone’s slap shot from the point beat Lukas Dostal to give the Flames a 1-0 lead.
But the good times didn’t last. Adam Ruzicka and Blake Coleman took consecutive minor penalties, giving the Ducks 32 seconds of a two-man advantage. They didn’t waste that chance. They won the face-off, made a couple passes, and Mason McTavish leaned into a one-timer feed from Jacob Markstrom’s left. That tied things up at 1-1.
First period shots were 11-9 Ducks (9-8 Flames at five-on-five) and five-on-five scoring chances were 9-5 Ducks (high-danger chances were 5-1 Ducks).
The Flames had an early power play in the second period. They hit the post, but didn’t score. But on the bump-up shift following the advantage, Ducks forward Ryan Strome was clipped by Brett Ritchie’s stick on a shot follow-through (so it was not a penalty). Strome went off slowly, giving the Flames ages of time with an odd-man situation. The Ducks’ attempted clearing pass hit one of the officials and went to Trevor Lewis. Lewis fed Brett Ritchie, who drove the net and went backhand on Dostal, beating him to make it a 2-1 Flames lead.
The Flames had four power plays in the period, but could not score.
Second period shots were 23-1 Flames (11-1 Flames at five-on-five) and five-on-five scoring chances were 11-2 Flames (high-dangers were 10-0 Flames).
The Ducks got an early power play in the third period and, for the second time in the game, they cashed in. The Flames did a good job stymieing the Ducks’ zone entries, but eventually they made their way into the zone. Jakob Silfverberg fired a shot from the circle past Markstrom to tie the game at 2-2.
Both teams had some looks, but the game was tied through regulation.
Third period shots were 12-12 (9-8 Ducks at five-on-five) and five-on-five scoring chances were 5-5 (high-dangers were 2-0 Ducks).
This game required overtime! The Ducks pressed for a good chunk of extra time, but eventually the Flames got possession and Rasmus Andersson picked the corner, beating Dostal short-side over the shoulder to give the visitors a 3-2 overtime victory.

The good news is that, playing a not great team, the Flames generated a ton of shots and scoring chances – they got a ton of high quality chances, too. But as has become tradition this season, they found ways to not score. Blocked shots, missed shots and posts were all over the place, as well as a slew of shots from outside the home plate area. The Flames also took penalties at challenging times, and against a team that has one of the lower conversion rates on the power play in the league, they allowed two power play goals.
But when the game mattered most, their best offensive blueliner, Andersson, stepped up and made a key play at a key time to give them the victory.

Let’s give it jointly to a pair of veterans: Lewis and Mikael Backlund were both consistently noticeable and did a lot of smart, good things in all three zones.
And hey, stick-tap to Andersson: his goal was a goal-scorer’s goal, right over the goalie’s shoulder.

What can you say about a second period where the Flames put up 23 shots but only scored once? Had they potted just one more there, life would’ve been a lot easier in the third period.

Noah Hanifin fought Anaheim’s Maxime Comtois after Comtois took exception to a hit on McTavish late in the first period.
The +22 shot differential in the second period set a Flames franchise record.

The Flames (16-12-7) are headed home. They’re scheduled to fly back to Calgary late on Friday night. They return to action on Dec. 27 at home against the Edmonton Oilers.
News
Recent articles from Ryan Pike