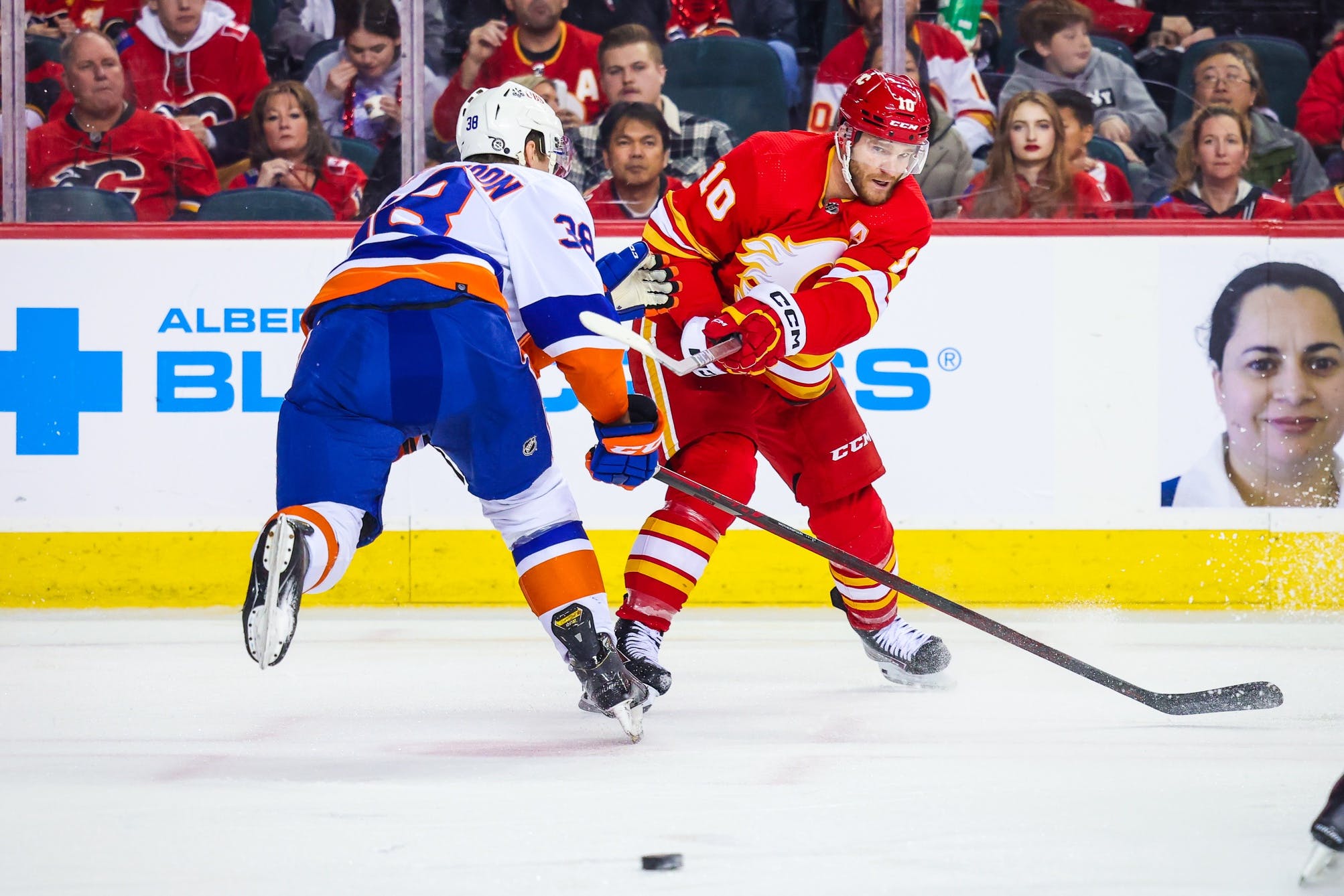 By Ryan Pike
19 days ago
Be sure to check out NHL betting site Betway for the latest Flames game day odds!
The Calgary Flames played the New York Islanders on Friday night. The Flames were good when they needed to be, taking advantage of a fatigued, clunky Islanders crew. It was a scheduled win for the home side, but they were easily the better team in a 4-1 victory over the Islanders.

The Flames were the better team early, scoring twice fairly early in the first period.
Just shy of five minutes in, the Flames made something happen on their way into the Islanders’ zone on the forecheck. A puck bounced its way into the Isles’ zone, where it was corralled by defender Scott Mayfield. Mayfield’s attempted exit pass up the wall was yoinked by Jonathan Huberdeau, who fed Milan Lucic in the high slot area. Lucic leaned into a shot, beating Semyon Varlamov to give the Flames a 1-0 lead.
89 seconds later, the Flames scored again. Off a rush, Blake Coleman received a pass from Andrew Mangiapane in his feet. He kicked the puck to his stick and his initial shot was stopped. But he got his own rebound and fired it past Varlamov from a sharp angle to give the Flames a 2-0 edge.
Later in the period, the fourth line cashed in. Radim Zohorna couldn’t get a shot off on the rush – the puck slid on him and then he threw it into the slot. But Trevor Lewis quickly regained possession and found Nikita Zadorov at the point. Zadorov’s slapper beat Varlamov to give the Flames a 3-0 lead.
But Zadorov was caught flat-footed on a late goal by the Islanders. Zach Parise entered the Flames’ zone as the trailer and received a pass from Jean-Gabriel Pageau. Parise deked around a stationary Zadorov to get into the slot area, then fired a perfect shot that beat Jacob Markstrom top corner to cut the Flames’ lead to 3-1.
First period shots were 8-6 Islanders (all at five-on-five) and five-on-five scoring chances were 7-5 Flames (high-dangers were 2-2).
Neither team lit the lamp in the second period, but a good amount of credit for that should go to Markstrom. He made a big stop on Casey Cizikas on a breakaway following a Flames power play, and a stop on Pageau during a Flames power play.
Second period shots were 9-8 Flames (7-5 Flames at five-on-five) and five-on-five scoring chances were 8-8 (high-dangers were 3-3).
The Flames really put it out of reach for the visitors midway through the third period. On a cycle play, Nazem Kadri saw a window of daylight over Varlamov’s shoulder and went for it, firing a shot that found some room over the shoulder and under the cross-bar. That gave the Flames a 4-1 lead.
The Flames held on for the 4-1 victory.
Third period shots were 8-6 Islanders (all at five-on-five) and five-on-five scoring chances were 7-4 Flames (high-dangers were 1-0 Flames).

The Flames were really sharp in the first period, while the Islanders were not. The urgency went out of the Flames’ game a bit in the second period and they didn’t execute quite as well with the puck, but they were still a little bit sharper than the Islanders were.

Let’s go with Lucic, who scored his first home goal of the season. Well done.

Is it possible to just say “the first period”? The Islanders came into the ‘Dome playing their final game of a four game road trip – and their third game in four nights, and fourth in six nights – and the Flames put together an effective first 20 minutes to more or less put this one out of reach.

2015 sixth-round pick Andrew Mangiapane played in his 300th NHL game.
Zohorna was briefly credited with an assist on Zadorov’s goal, but it was taken away later on.

The Flames (19-14-7) are headed back on the road. They begin a five game Central Division road trip on Sunday night when they play the Chicago Blackhawks.
News
Recent articles from Ryan Pike