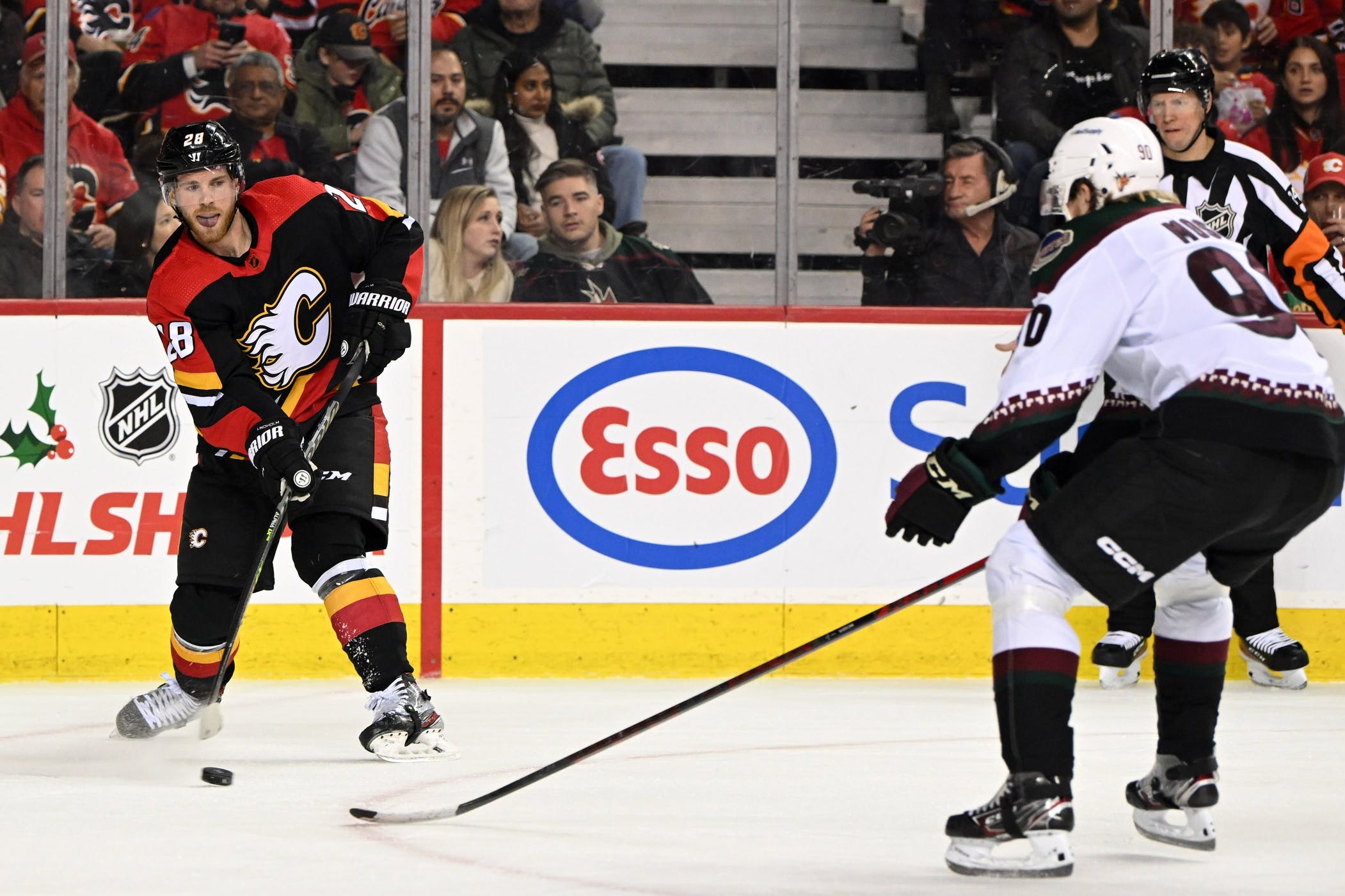 By Ryan Pike
1 month ago
‘Be sure to check out NHL betting site Betway for the latest Flames game day odds!
It has been said that football (soccer) is the beautiful game. Sometimes there’s a ton of beauty in hockey, too. Unfortunately, Monday evening’s game between the Calgary Flames and Arizona Coyotes was something to endure, rather than enjoy. This hockey game was largely devoid of beauty.
But the Flames found a way to survive a fairly plodding match, winning 3-2 over Arizona.

The first period was a pretty flat start for the home team. They took a pair of consecutive minors – by Noah Hanifin and Jonathan Huberdeau – and killed them off, though in doing so they gave the Coyotes a bunch of zone time. The Coyotes led in shots by 5-0 and 7-1 margins at various points in the first half of the period.
But midway through the period, a nice pressure shift by Nazem Kadri’s line led to a Coyotes defensive zone turnover and a good amount of pressure. Eventually, that resulted in a goal. Chris Tanev’s shot from the right point was tipped by Dillon Dube past Karel Vejmelka to give the locals a 1-0 lead.
A little later, Mikael Backlund drew a minor while driving into the Arizona zone. On the ensuing power play, the Flames scored a weird one. Huberdeau attempted a pass from below the goal line to set up Kadri for a tap-in out front. But Kadri didn’t make good contact with the puck and it blooped over to the right to Elias Lindholm, and Lindholm jammed in the puck to give the Flames a 2-0 lead.
First period shots were 8-7 Flames (6-4 Flames at five-on-five) and five-on-five scoring chances were 6-4 Flames (high-dangers were 2-2).
The Flames carried play for much of the second period, but had trouble translating possession into dangerous chances. The Coyotes got a chance midway through the period and capitalized, though.
Off a face-off win in Calgary’s end, the Coyotes moved the puck to the point with some traffic in front of Dan Vladar. A Shayne Gostisbehere point shot found a way through – it looked like it glanced off either a Flames stick or Nick Bjugstad – to cut the lead to 2-1 Calgary.
Second period shots were 15-6 Flames (all five-on-five) and five-on-five scoring chances were 13-8 Flames (high-dangers were 4-1 Flames).
The third period was similarly low event, but the Coyotes got their looks and took advantage of them. The visitors got some time in the Flames zone and got cycling, and eventually Jacob Chychrun pinched down to below the circles and fired a wrister that beat Vladar short-side (over the shoulder) to tie the game up at 2-2.
But just when overtime was about to creep up, Adam Ruzicka drew a minor penalty in the Coyotes zone. On the ensuing advantage, Kadri fired a feed from Tyler Toffoli past Vejmelka to give the Flames a 3-2 lead.
The Coyotes pulled their goalie for an extra attacker, but they couldn’t score and ended up taking a minor that effectively quashed their chances of gaining a point.
Third period shots were 7-4 Coyotes (6-1 Coyotes at five-on-five) and five-on-five scoring chances were 4-3 Coyotes (high-dangers were 2-0 Coyotes).

This was a fairly low-event, no-flow type of hockey game. Neither team was particularly good at making plays. But the Flames had the puck more, won more battles, got better goaltending, and executed more frequently than Arizona did. It was a game the Flames needed to win give the the calibre of the opposition, and they found a way to grind it out and grab two much-needed points.
It was an odd game, though, prone to wild swings. The Flames were out-shot 7-1, then went on an 11-1 run (and scored twice), then allowed five consecutive shots (and a goal), then took control again.

Let’s go with Kadri, since he had a goal and two assists – he was in on literally every Flames goal.
Vladar was quite sharp when he needed to be, as well.

It’s cliche, but Kadri’s game-winner kept this game out of overtime (which was a favour to everyone in attendance).

This was Juuso Valimaki’s first game back in Calgary since being claimed off waivers by Arizona in October.

The Flames (12-10-3) are back in action on Wednesday evening when they host the Minnesota Wild.
News
Recent articles from Ryan Pike