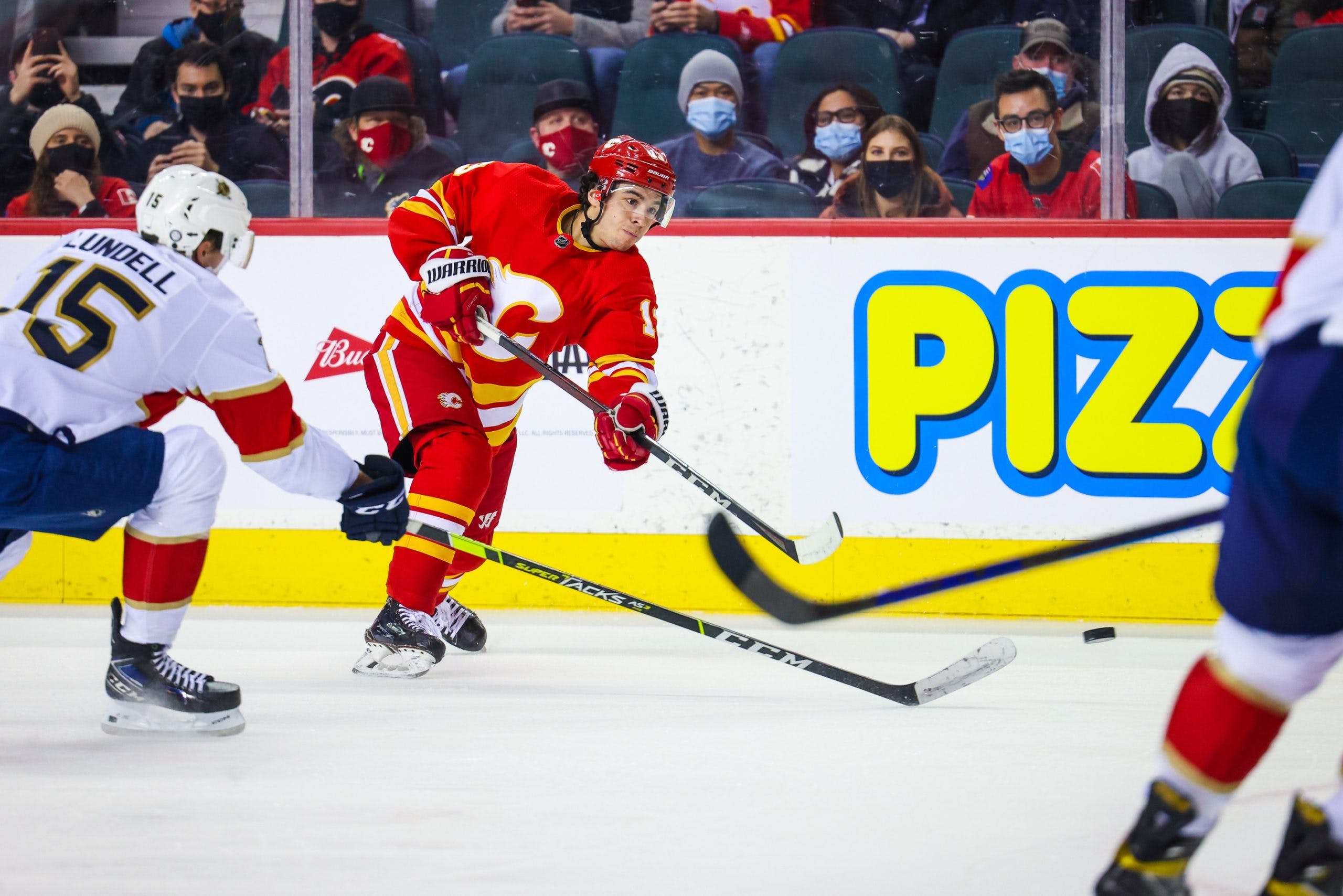 By Ryan Pike
1 year ago
Two weeks ago in Sunrise, the Calgary Flames were like a fire hose against the Florida Panthers: energetic but incredibly unfocused. On Tuesday night in a rematch at the Saddledome, the Flames were much more like we’re used to seeing them: structured, aggressive, and pretty poised.
The Flames got a measure of revenge against the Panthers, beating them 5-1 to snap Calgary’s four game losing skid.

The Flames looked very good early and managed to draw a penalty and take advantage. Dillon Dube was tripped up in the neutral zone. On the ensuing power play, the Flames won the draw and moved the puck around quickly. Rasmus Andersson’s initial shot was stopped by Spencer Knight but Andersson buried his own rebound to give the Flames a 1-0 lead. It took them just 23 seconds into the power play to score.
A little later, the Flames used a strong forecheck and cycle in the offensive zone to double their lead. Mikael Backlund fed Andrew Mangiapane, who spun and passed to Blake Coleman at the side of the net. Knight went post-to-post, but Coleman’s shot rolled off his stick a bit. It caught Knight by surprise a bit, bobbling between his pads and glancing into the open net to give Calgary a 2-0 lead.
Shots were 11-10 Panthers (8-5 Panthers at five-on-five) and scoring chances 6-4 Panthers in the first period.
The Flames bottled up Florida well enough for much of the second period, but a bit of shaky defensive play led to the Panthers getting on the board. Off the rush, Carter Verhaeghe rang a shot off the post. Jacob Markström, and the entire defensive unit, got a bit scrambly right after. Mason Marchment rang the puck off the other post, then Sam Bennett jammed the loose puck into the open net to cut Calgary’s lead to 2-1.
But after Mangiapane drew a penalty, the Flames scored on another power play. This time it was pretty academic, taking just three seconds. Sean Monahan won the face-off and went to the front of the net. Johnny Gaudreau shot the puck towards the net and Monahan deflected it past Knight to make it 3-1 for the home side.
Shots were 14-8 Flames (13-6 Flames at five-on-five) and scoring chances 15-10 Flames in the second period.
The Flames added some insurance early in the third period off a really nice passing sequence. Gaudreau entered the zone, stopped and passed to a moving Elias Lindholm. Lindholm hucked the puck into the air towards the slot, where it was redirected by a moving Matthew Tkachuk at about waist height into the net. By the time the Panthers registered what had just happened, it was 4-1 Flames.
They added more insurance a little later, as a Panthers turnover sent the Flames into the offensive zone on an odd-man rush. Gaudreau fed Monahan with all kinds of time and space in the slot and Monahan waiting out Knight with his shot to bump the lead up to 5-1 Flames. And that’s how it ended.
Shots were 10-7 Panthers (9-7 Panthers at five-on-five) and scoring chances 8-8 in the third period.

Gaudreau had four assists, so let’s give it to him.
But a lot of gentlemen in red had strong games. (To throw out a few names: Markström, Tkachuk, Lindholm, Coleman, Mangiapane and Backlund among them.)

Coleman’s goal in the second period made it 2-0, but also gave the Flames that extra cushion that seemed to calm them down a bit. When they played in Florida two weeks ago, they could never pull away. This goal allowed them to pull away.

This was Sam Bennett’s (and Ryan Lomberg’s) first game back at the Saddledome since leaving the Flames. Bennett got a tribute video, but Lomberg did not.

The Flames (18-11-6) are back in action on Saturday up Highway 2 when they visit the hated Edmonton Oilers.