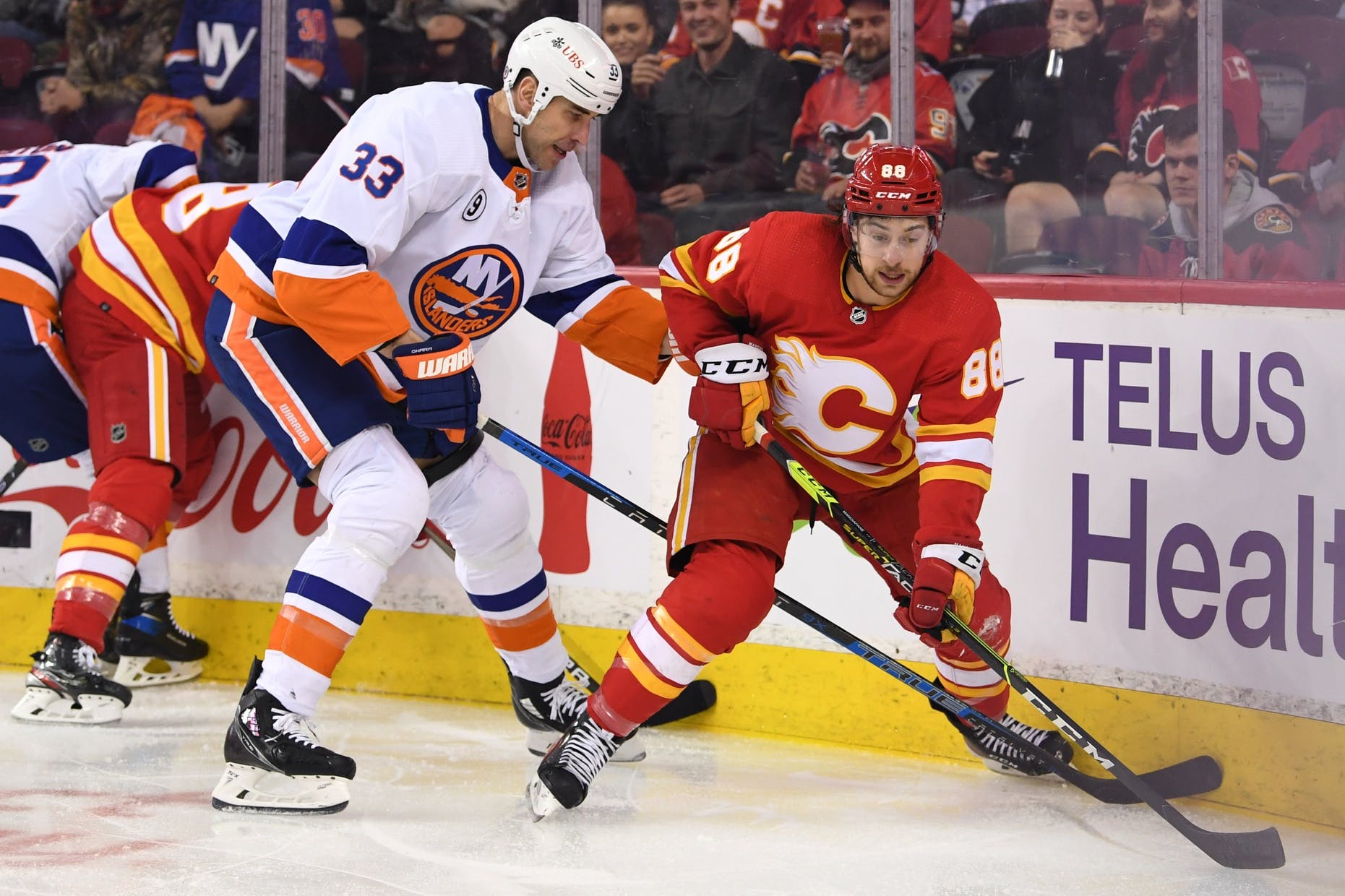 By Ryan Pike
11 months ago
Even in the National Hockey League, not every game is going to be picturesque. Sometimes both teams are playing their third game in four nights and passes aren’t quite as crisp or accurate as they’d be otherwise. On Saturday night, the Calgary Flames hosted the New York Islanders.
Neither team was sublime, but the Flames were decisively the better squad in a 5-2 win over the Islanders.

Play in all three zones was a bit disjointed early for both teams, which led to some scrambly odd-man rushes in both ends.
The Flames ended up opening the scoring about midway through the period. Rasmus Andersson had the puck at the top of the offensive zone and pinched to look for a pass. He ended up skating around the entire zone once, then went behind the net and found Adam Ruzicka in the low slot. Ruzicka chipped the puck past Ilya Sorokin to give the Flames a 1-0 lead.
The Flames took a pair of first period penalties, and their penalty kill could only dispatch of one of them. The second power play ended with Noah Dobson lobbing a shot towards the net – and a clump of bodies in front of Jacob Markstrom. The shot glanced off Blake Coleman and beat Markstrom to tie the game up at 1-1.
But the home side got the lead back before the period ended, just 61 seconds later. Oliver Kylington made a nice pass to send Johnny Gaudreau into the Islanders zone. Gaudreau patiently waited for reinforcements, passed to Chris Tanev, and Tanev’s patient shot was redirected off Zach Parise’s stick past Sorokin to give the Flames a 2-1 lead.
Shots were 10-9 Flames (10-6 Flames at five-on-five) and scoring chances 8-5 Islanders in the first period.
The second period was dominated by the Flames for much of the duration – the Islanders didn’t register a shot for the first 12:39 of play – but the teams exchanged goals in the frame.
The Flames made it 3-1 off a very savvy play by Ruzicka on a bit of a broken rush play. Ruzicka had the puck to Sorokin’s right and seemed ready to shoot, but instead he put the puck towards Andrew Mangiapane in the slot. Mangiapane got a bit of his stick on it, enough to redirect the puck past Sorokin to pad the Flames’ lead.
But the Islanders got back within a goal 78 seconds later. Nikita Zadorov lost his stick in a puck battle in the corner (and also lost track of his check). That led to a bunch of in-zone confusion among the Flames players, allowing the Islanders to cycle and puck and Jean-Gabriel Pageau to deposit a Parise pass from below the red line past Markstrom to make it a 3-2 lead for the Flames.
Shots were 8-4 Flames (all at five-on-five) and scoring chances 11-5 Flames in the second period.
The Flames added some insurance in the third period. The Ruzicka line got the Islanders hemmed into their own zone and the cycle ended with an Erik Gudbranson shot just trickling through Sorokin’s pads and over the line. Sorokin swept the puck out with his glove, but the play was reviewed and declared a good goal to make it 4-2 Flames.
Elias Lindholm buried a one-timer feed from Matthew Tkachuk late to give the Flames a 5-2 lead. They held on for the win.
Shots were 11-7 Flames (all at five-on-five) and scoring chances 15-8 Flames in the third period.

This game had an odd energy. Both teams were playing their third game in four nights. Neither team looked incredibly sharp (especially with lots of passes going errant and puck bobbles on either side), but the Flames were a little bit more structured, a little bit better defensively, and had a little bit better puck luck than the Islanders did.

Let’s go with a joint award, as Ruzicka had two points (and set up the game-winner) while Andersson was all over the place in the offensive zone (in a good way).

Tanev’s goal late in the first period ensured the Flames headed into the locker room with a lead. They never relinquished it.

The Islanders PP goal in the first period extended a string of 13 successful Calgary penalty kills.
This was Jacob Markstrom’s 12th consecutive start in net for the Flames.
Ilya Sorokin started for the Islanders after Semyon Varlamov was placed in COVID protocol.
Midway through the second period, Erik Gudbranson fought Ross Johnston.

The Flames (26-13-6) continue their homestand on Tuesday night when they welcome Jake Bean and the Columbus Blue Jackets to town.