Calgary Flames Post-Game: Stepping on rakes against the Senators 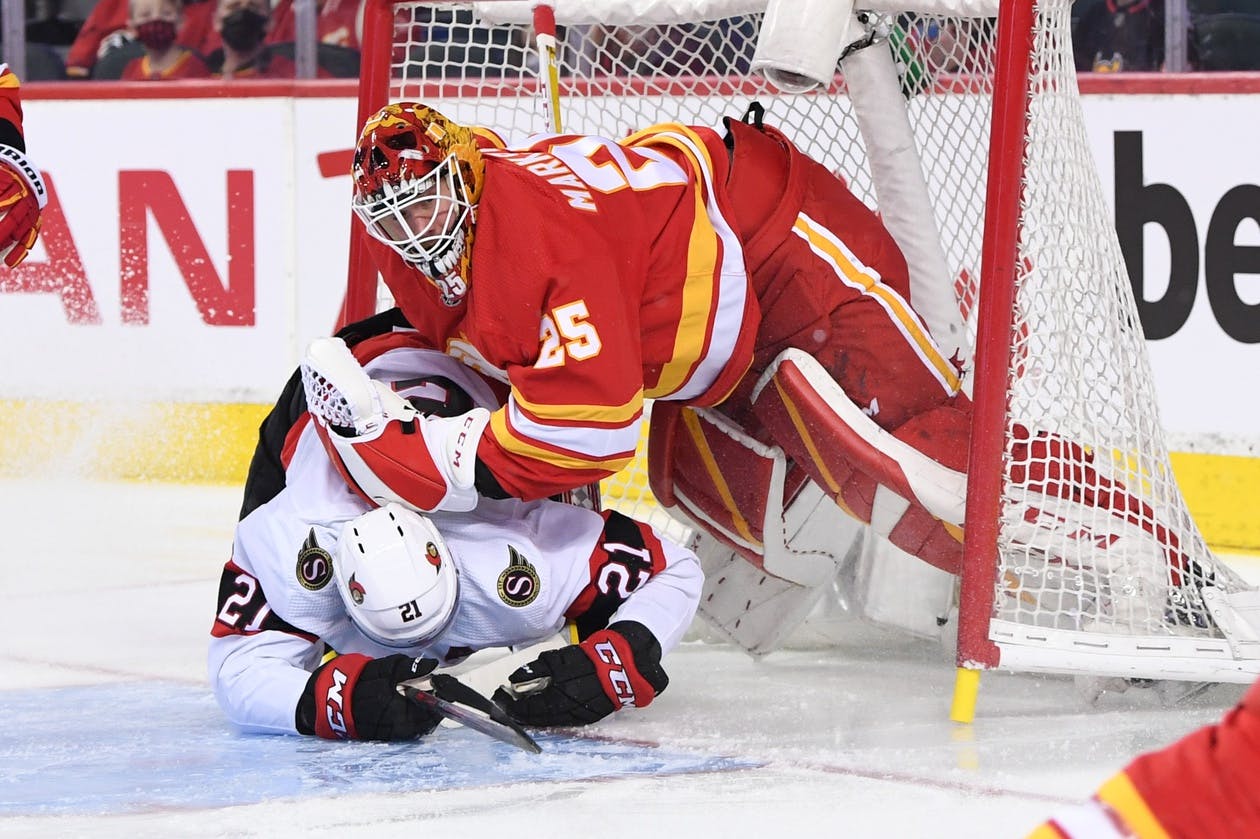 By Ryan Pike
1 year ago
The Calgary Flames hosted the Ottawa Senators at the Saddledome on Thursday night, hosting their first game in over a month. The Flames had their moments, but overall it was the lowly Senators that carried the play throughout the game.
The Flames crashed back to the .500 mark (in terms of pure wins and losses) with a 4-1 loss to Ottawa on Thursday, in a game where they never held the lead.

The Flames had some nice speed early, but the Senators got on the board first. Brett Ritchie was attempting to bump a clearing pass out from the boards to Dillon Dube. The puck was intercepted by Alex Formenton and a quick pass later Nick Paul buried it past Jacob Markström to make it 1-0 Ottawa.
Later in the period, another Flames turnover on an attempted zone exit (this time by Mikael Backlund) resulted in scoring chances for Erik Brannstrom. And Connor Brown. And Paul. Markström stopped the first two, but Paul buried his chance to give the Senators a 2-0 lead.
Shots were 13-10 Senators (12-6 Senators at five-on-five) and scoring chances 10-9 Senators in the first period.
The Flames were better in the second period, but the Senators were playing with a two goal lead and were largely content just to hang out and clog up the neutral zone. But the Senators added a goal late in the period.
Drake Batherson had the puck deep in the offensive zone. Noah Hanifin, seemingly unsure if Batherson was going to shoot from a bad angle or pass into the slot, hung back a bit. This gave Batherson enough space to pick the top corner over Markström’s shoulder to make it 3-0 Senators.
Shots were 13-6 Senators (12-6 Senators at five-on-five) and scoring chances 8-7 Flames in the second period.
The Flames broke the goose-egg early in the third period. After an initial scoring chance was dismantled, Chris Tanev fired the puck towards the net and Matthew Tkachuk made a nifty deflection out front to cut Ottawa’s lead to 3-1.
But Ottawa answered back. Rasmus Andersson misread a play at the blueline and was caught flat-footed when the puck was turned over and Connor Brown got moving on a breakaway. Brown beat Markström on said breakaway to extend Ottawa’s lead to 4-1.
Shots were 12-8 Flames (12-6 Flames at five-on-five) and scoring chances 12-9 Flames in the third period.

Remember that episode of The Simpsons where Sideshow Bob keeps stepping on rakes?
This was that game for the Flames. They weren’t out-and-out bad, as they were usually in position and trying to do the right things. But their execution was sorely, sorely lacking, and they just couldn’t get out of their own way.
Three goals were off Flames turnovers, two of which were in their own zone. The other goal was off a bad defensive zone read. Their offensive execution wasn’t good. Their defensive execution wasn’t good. They got out-battled by the Senators for 50/50 pucks. They didn’t get timely saves from Markström, while Matt Murray made timely saves for Ottawa. (You could argue that Murray saw most of the shots the Flames put on net, with the lone goal being a deflection in traffic by Tkachuk.)
The Flames stepped on a lot of rakes in this game.

Let’s jointly give it to Tanev and Oliver Kylington. Their pairing played a lot and generated a goal (while being on the ice for zero goals against.)

The Flames seemed to have some hope in the third period after Tkachuk scored, but Brown’s breakaway goal gave Ottawa a three goal lead and really seemed to take the pep out of Calgary’s collective step.

Down 2-0 in the second period, Milan Lucic fought Scott Sabourin. Lucic, unsurprisingly, clobbered Sabourin. Sabourin dislocated a finger in the fight and didn’t return.
Announced attendance was 9,639 at the Saddledome, though there were far fewer bodies in the building. This was probably the least-attended Flames home game since the Stampede Corral days.

The Flames (17-11-6) are back in action on Tuesday when they host the Florida Panthers.