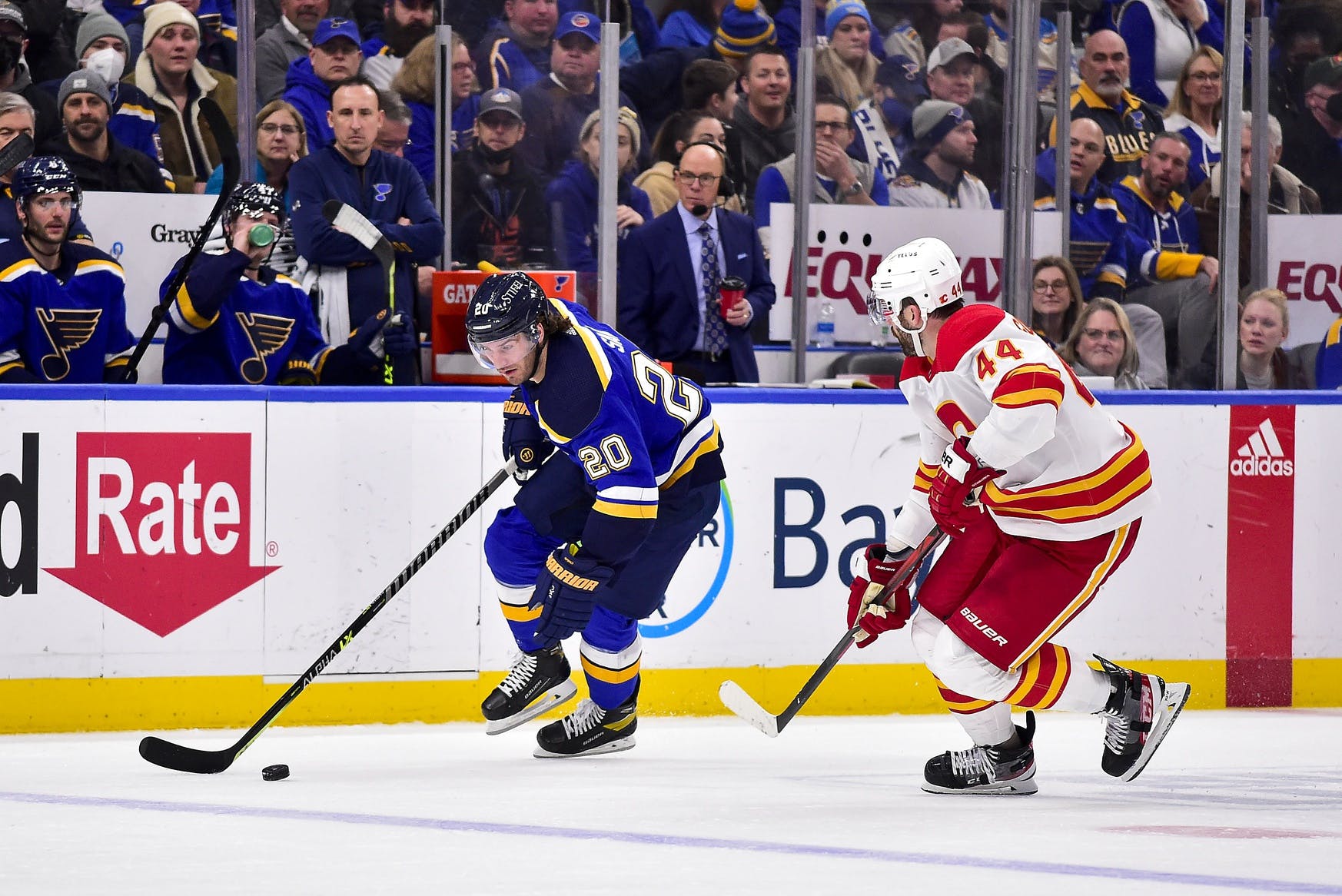 By Ryan Pike
10 months ago
The Calgary Flames have played pretty well lately, and more recently their results have reflected their general level of play. On Thursday night, the Flames played their third game in four nights and visited a rested St. Louis Blues squad at the Enterprise Center.
The Flames didn’t play all that poorly, but their execution was lacking at times and they skated to a 5-1 loss to the Blues.

The Blues opened the scoring off a pair of nice plays from St. Louis (and a couple iffy reads by the Flames). With @Sean Monahan a bit out of position, @Brayden Schenn made a nice pass through a seam that sent @Brandon Saad in on a rush towards the Flames net (with a step on @Erik Gudbranson as he headed into the zone). With a bit of space Saad made a nice shot, beating @Jacob Markstrom to give the Blues a 1-0 lead.
The Flames answered back, though. @Ivan Barbashev mishandled a puck in his own zone and @Andrew Mangiapane grabbed the errant pass and fed @Mikael Backlund below the offensive face-off dot. Backlund’s quick bad-angle shot beat @Ville Husso to tie the game at 1-1.
But the Blues responded before the period’s end. Off a neutral zone turnover, @Rasmus Andersson was caught up ice and @Noah Hanifin was left to defend a two-on-one. Hanifin looked to play the pass (and based on body language, so did Markstrom) and Schenn beat Markstrom with a wrister to give the Blues a 2-1 lead.
Shots were 11-6 Blues (10-6 Blues at five-on-five) and scoring chances 11-4 Flames in the first period.
The Blues got some insurance in the second period off a play with some poor execution and communication. @Adam Ruzicka, trying to help win a battle behind the Flames net, swept the puck away from the fray. Unfortunately, the puck didn’t find a teammate to move it up the ice: it found Saad, who beat Markstrom with a quick shot that made it 3-1 Blues.
Shots were 15-10 Flames (11-7 Flames at five-on-five) and scoring chances 9-8 Flames in the second period.
The Blues padded their lead early in the third period. With the third pairing and fourth line hemmed in their own zone a bit, and chasing the puck around, @Jordan Kyrou finished off a nice little passing sequence with a back-door redirect past Markstrom to give the home team a 4-1 edge.
St. Louis added a late power play goal from Ryan O’Reilly and this one ended as a 5-1 Blues victory.
Shots were 8-7 Flames (6-5 Flames at five-on-five) and scoring chances 5-5 in the third period.

The Flames weren’t run outta the Blues’ building by any stretch. But they made some bad reads at bad times – you could make an argument that all four Blues goals were a product of miscues – and they couldn’t translate their zone time and scoring chances into goals.
It was a “scheduled loss,” but the Flames generally played just poorly enough to lose. Had they slightly better execution, puck luck or defensive fortitude, it’s a much closer game. They weren’t bad, they just weren’t quite good enough.

Backlund had the lone Flames goal, but he was also all over the offensive zone, with a bunch of good scoring chances and a ton of shots. If he had any puck luck, he would’ve had at least two more goals in this game.

The second Saad goal, coming off an unfortunate Ruzicka turnover, really seemed to deflate the road team and give the home team much-needed breathing room.

Markström started for the second time in two nights. This was just the second time in six sets that the Flames have used the same goaltender in both halves of a back-to-back: @Daniel Vladar started in Tampa Bay and Carolina earlier this month, though that was because Markström was dealing with a minor injury and wasn’t 100%.
Following the game Flames head coach Darryl Sutter noted it was an easy decision to start Markstrom again, citing the team getting several days off coming up (referring to the All-Star Break), the team having been off for an extended period due to the COVID pause, and noting that Vladar “hasn’t won in a month.”

The Flames (20-13-6) are headed home. They host the Vancouver Canucks at the Saddledome on Saturday night!