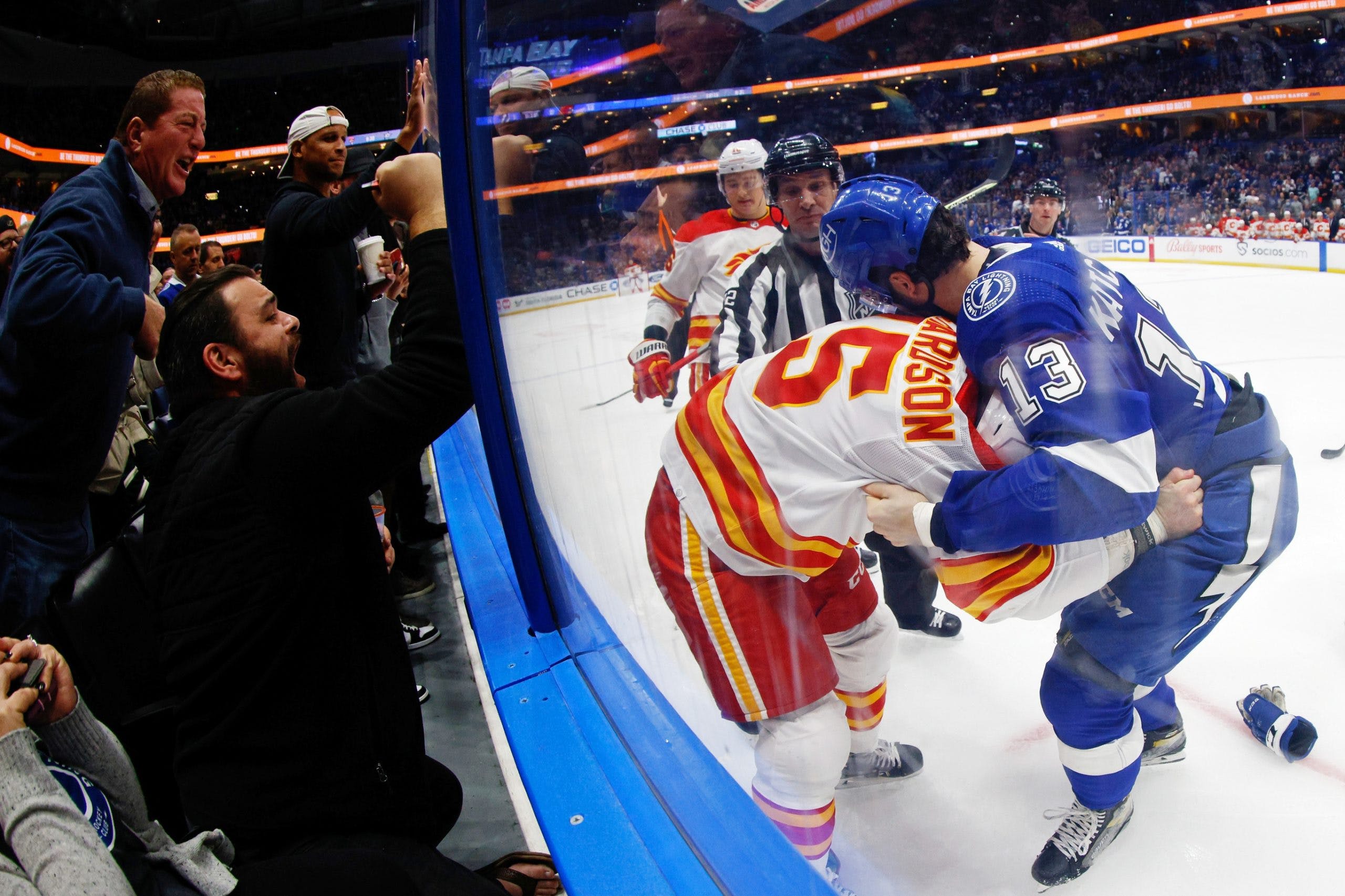 By Ryan Pike
1 year ago
The Calgary Flames headed into central Florida on Thursday evening to visit the defending Stanley Cup Champions, the Tampa Bay Lightning. The Flames were decent enough, but they made enough mistakes at key times (and were the victim of some difference-making plays by Tampa’s stars) that this game wasn’t all that close on the scoreboard.
The Flames skated to a 4-1 defeat at the hands of the Lightning.

Neither team scored in the opening period. The Lightning and Flames were fairly even early on, but the hosts got their legs moving and gradually took over more and more of play as the period carried on.
Shots were 14-8 Lightning (10-7 Lightning at five-on-five) and scoring chances 14-4 Lightning in the first period.
Midway through the second period, Tampa finally solved Dan Vladar. The Flames got caught up ice a bit – it looked like Brett Ritchie fell over in the net-front area – and that allowed the Lightning to counter-attack with numbers. Pierre-Edouard Bellemare found Corey Perry on the wing with a nice crisp pass and Perry beat Dan Vladar high to make it 1-0 Lightning.
Shots were 13-5 Lightning (10-5 Lightning at five-on-five) and scoring chances 13-8 Lightning in the second period.
The Lightning came out motivated to begin the third period and scored early. The Flames got running around a bit in their own zone against Tampa’s top line, trying to zip around to block or intercept passes. This chase allowed Brayden Point to find himself all alone at the side of the net, and Nikita Kucherov found him with a quick pass and Point had oodles of time to tuck the puck behind Vladar to make it 2-0 for the home side.
The Flames had a chance to get back into this one with a puck-over-glass penalty to the Lightning midway through the period. They didn’t score, and then Tampa scored two goals in a 14-second span to put this one entirely out of reach. Ondrej Palat won a couple puck battles, put the puck deep in the Flames zone, then buried a feed from below the goal line from Kucherov to make it 3-0. On the next shift, Alex Killorn sniped one past Vladar off the rush to make it 4-0.
Dillon Dube scored off the rush late in the third period, as his wrister beat Andrei Vasilevskiy glove-side to cut the lead to 4-1. (Dube’s release, while he was being approached by a defender, seemed to catch the goaltender a bit off-guard.) But that’s as close as Calgary got.
Shots were 14-6 Flames (7-5 Flames at five-on-five) and scoring chances 10-8 Lightning in the third period.

The problem in Florida was depth scoring: Florida got it and the Flames did not.
The problem in Tampa was scoring, period. The Lightning’s star players – notably Kucherov, Palat and Point – were very good and made smart, difference-making plays when the game was up for grabs. The Flames’ stars players did not to such things, and that was the difference.
It’s a shame, too, because it effectively wasted a really strong goaltending performance from Vladar.

Vladar. He was easily the best player in red and white.

The game got away from the Flames a bit due to a pair of defensive lapses, but their third period power play failing to score followed by two Tampa goals completely took them out of contention in this game.

This was Vladar’s first appearance in net since Dec. 7.
Brad Richardson was ejected from the game in the second period after receiving a match penalty for a check to the head of Mathieu Joseph. Joseph didn’t appear to miss any shifts, though.
Noah Hanifin fought Joseph in the first period and Erik Gudbranson fought Pat Maroon in the third period. Neither bout was of much consequence or significance.

The Flames (17-9-6) are off to North Carolina. They play the Carolina Hurricanes tomorrow night in the final game of their road trip.