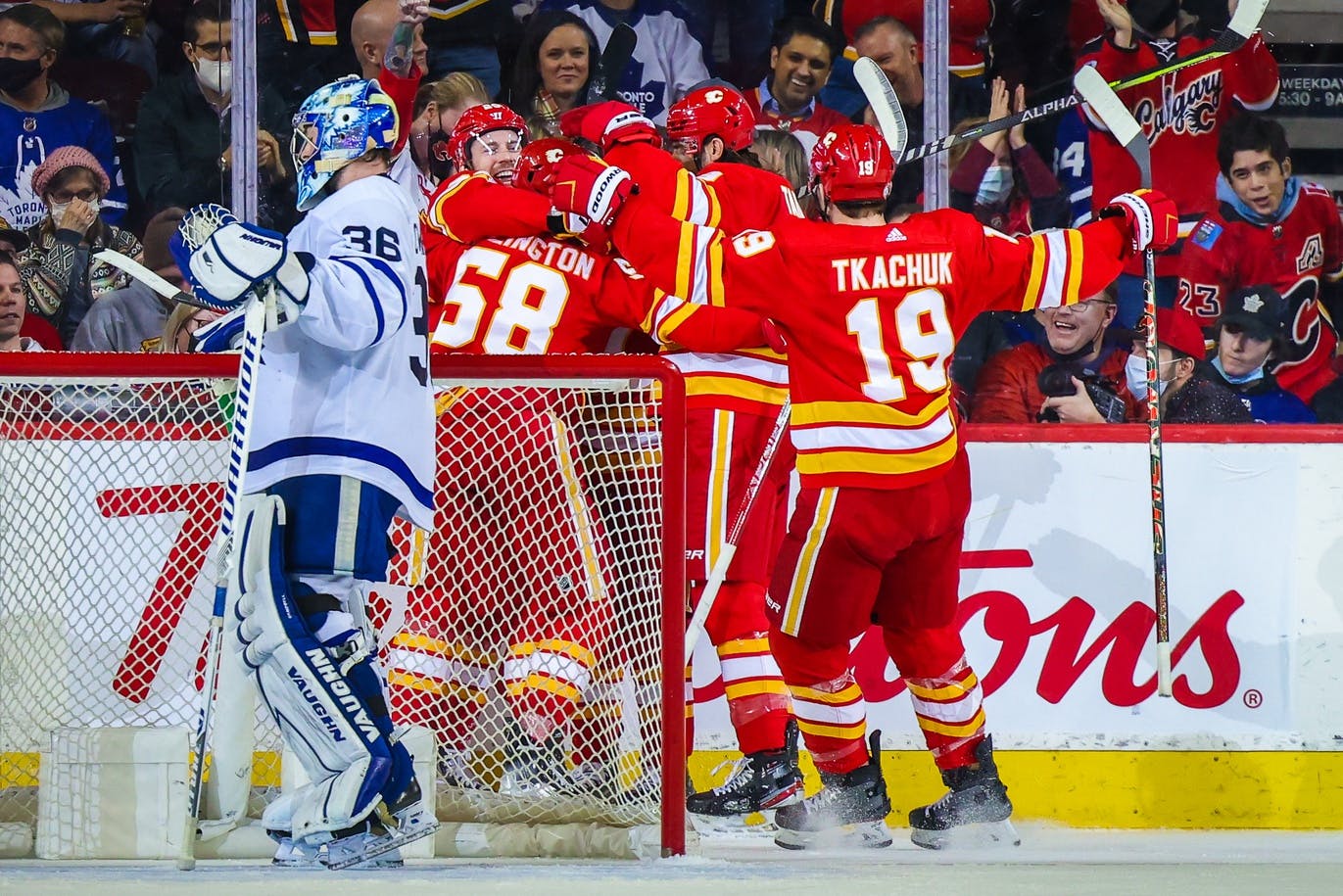 By Ryan Pike
11 months ago
The Calgary Flames played well enough to win on Wednesday night against Vegas, but they didn’t play a complete game. Their goaltender was their best player and covered up for a lot of rough spots. On Thursday night, the recipe was a little different but the dish turned out to be quite similar. The Flames didn’t play a complete game, but they played well enough to win against the Toronto Maple Leafs.
Powered by a four goal outburst in the second period, the Flames beat the Leafs by a 5-2 score. It’s their fifth win in a row and eighth over their past 10 games.

The Leafs were full of pep and energy early on, likely partially fuelled by rest and partially fuelled by the large contingent of loud Leafs fans in the Saddledome. The Flames were on their heels for much of the period.
The highlight of the period, if you want to call it that, was a big hit by Nikita Zadorov on Ondrej Kase late in the period. Kase had his head down playing the puck and looked up and boom, he was hit by Zadorov. The height difference made it a pretty big hit, with Kase’s head basically bouncing off Zadorov’s chest and shoulder.
Kase did not return to the game.
Shots were 18-11 Maple Leafs (13-6 Maple Leafs at five-on-five) and scoring chances 8-4 Maple Leafs in the first period.
The second period featured a bunch of goals.
The Leafs kept carrying play for a good chunk of the period and eventually, they broke through Jacob Markstrom. John Tavares made a great shot that Markstrom stopped. On the rebound, Rasmus Andersson made a heroic shot block to rob William Nylander. But in all the confusion, Rasmus Sandin grabbed the loose rebound and beat Markstrom (and Andersson, too) to give Toronto a 1-0 lead.
But 24 seconds later, the Flames answered back. Blake Coleman sent Mikael Backlund and Andrew Mangiapane in on a two-on-two rush. Backlund made a nice back-hand pass to Mangiapane and his quick shot beat Jack Campbell to tie the game up at 1-1.
The Leafs kept pushing, but Markstrom held the fort. Eventually, the Flames answered back.
Elias Lindholm won an offensive zone face-off. On a set play, Andersson snuck in from the right point and carried the puck deep. Noah Hanifin pinched from the left point and redirected a cross-slot pass from Andersson past Campbell to give the Flames a 2-1 lead.
Just 32 seconds later, the Flames added some insurance. Johnny Gaudreau was fouled on a zone entry, leading to a power play. Backlund won the draw back to the point and Oliver Kylington’s wrister from the right point found its way past Campbell to give the Flames a 3-1 edge.
Later still, Kylington generated a turnover by intercepting a Leafs pass in the neutral zone. He sent Gaudreau into the offensive zone, and his pass to Lindholm was fired past Campbell to give the Flames a 4-1 lead.
Shots were 14-9 Maple Leafs (10-8 Maple Leafs at five-on-five) and scoring chances 11-7 Maple Leafs in the second period.
The Flames added to their lead early in the third period. After cycling around in the Leafs zone for a bit, Andersson fired a wrister through some traffic that eluded Campbell to boost their lead to 5-1.
The Leafs responded, though. Off a rush, Auston Matthews made a savvy pass to Michael Bunting, whose wrist shot beat Markstrom just inside the post to cut the lead to 5-2. But the Flames held on for the win.
Shots were 16-6 Maple Leafs (13-6 Maple Leafs at five-on-five) and scoring chances 5-4 Flames in the third period.

Let’s be brutally honest here, friends: the Flames lose this game handily if Markstrom isn’t as sharp as he was in the first half of the game.
For the first half of the game, the Flames were on their heels and had trouble with Toronto’s speed, especially in the neutral zone and exiting their own end. But the Flames were held in by their goalie, and their skill players are good enough that when they’re given a window to execute, they can hurt you.
The Leafs took their foot off the gas for a few minutes in the second period, and that was enough for the Flames to grab hold of the game. From there, they were good enough defensively not to give the lead away.

Markstrom was superb. He was easily their best player.
But as has become the custom lately, the top two forward lines and top two defensive pairings were also quite good and they helped tilt the game.

Over a span of just 3:07 in the second period, the Flames generated six shots on goal, won three of four face-offs, drew a penalty and scored three times.

This was Markstrom’s 350th NHL game. Sean Monahan also played in his 635th career game, passing TJ Brodie for ninth on the Flames franchise leaderboard.
The Flames are now 21-0-1 when leading after two periods.

The Flames (25-13-6) are back in action on Saturday night when they host the New York Islanders.