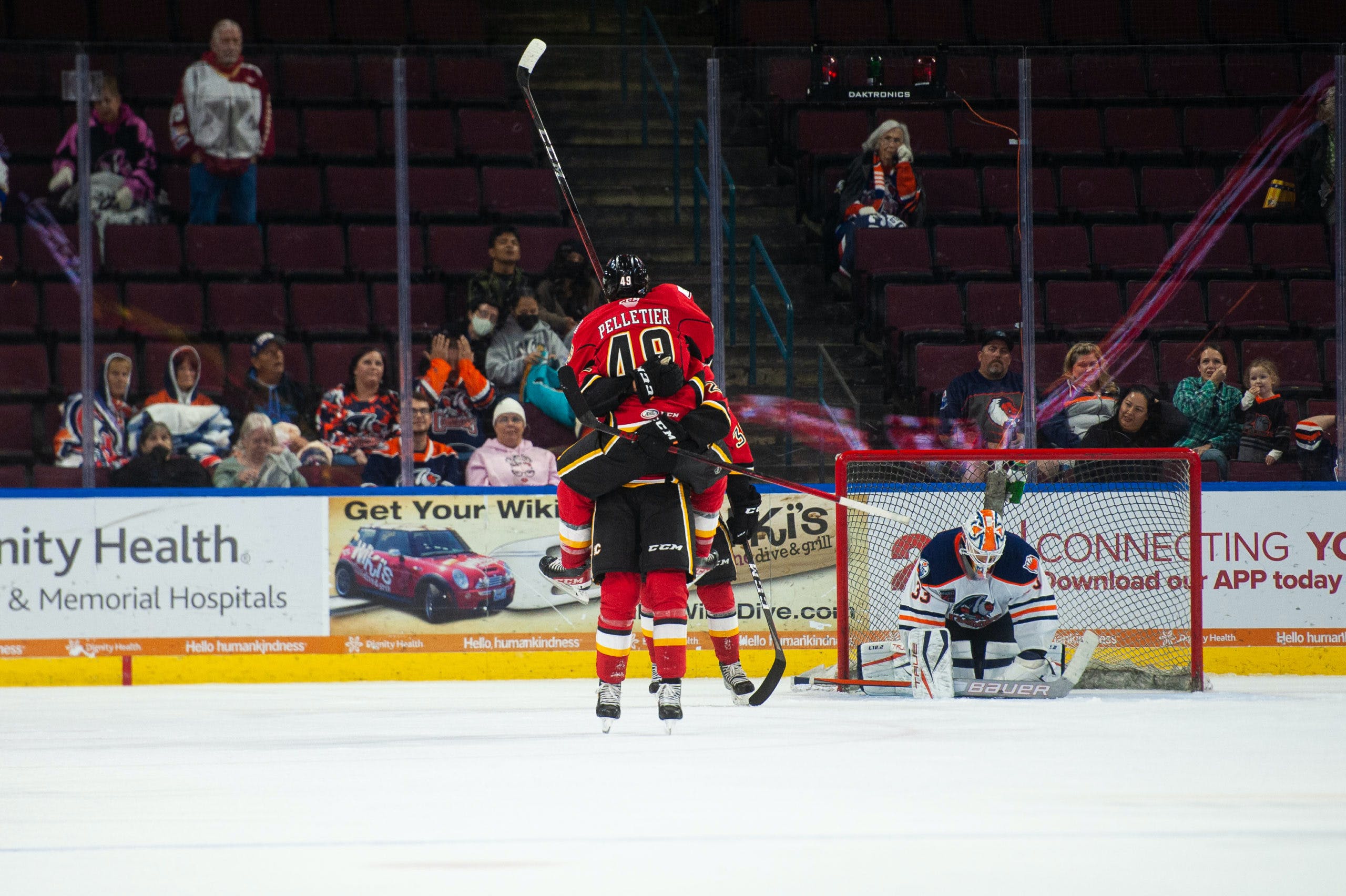 By Ryan Pike
11 months ago
It’s a quiet week for the hockey world, with the majority of the Calgary Flames’ prospects off due to the holidays or COVID-19 protocol stoppages. Either way, we figured it’s a good time to look at each player’s offensive contributions in the context of their NHLe (NHL equivalent) progression.
Let’s dive in!
For the unfamiliar, NHLe is a method of roughly approximating what a player’s production in one league would translate to at the NHL level. It’s an approximation based on large data samples of players who played in those leagues and made the jump (or didn’t) to NHL success. Take them with a grain of salt, as they’re not meant to be predictions, but mere conversions meant to put a player’s current play in a broader context.

Beck’s 18 and missed his entire draft year, but he’s made a massive jump in productivity from his Draft-1 year (when he was 16). It’s yet to be seen how he’ll be once he returned from injury, but the start to his season was superb.

Boltmann had a pretty rough Draft+1 year offensively in 2020-21, but he’s returned to his pre-draft form. He’s a stay-at-home guy ultimately, but he’s been pretty decent as a sophomore for the Irish.

Ciona’s producing this season at more or less the rate he was producing in his Draft year. It’d be nice to see a bit of progression, especially given his size and physical maturity compared to the younger WHL skaters he’s playing against.

Coronato’s production is down a bit, relatively-speaking, from his superb USHL draft year. That said, it’s natural for production to dip slightly when going into a higher level and he’s still producing at a high level. It’ll be interesting to see what the second half of this season and his entire sophomore year look like from an offensive standpoint.

Duehr’s not destined to be a pro hockey star, but he’s really consistent when you look back at his production over this four year period.

Feuk has been a decent Swedish junior player and a wholly unremarkable Swedish pro.

Francis has shown really steady progression as a junior player. He’s rapidly catching up offensively this season after it was delayed a bit by a brief AHL stint.

Gawdin’s one of the older prospects in the system, and he’s destined to become a Group 6 free agent and leave the organization this summer. But he’s been a really consistently strong AHLer, with only a minor blip in the pandemic season where he bounced around the system a bit.

He’s a role player in the SHL right now, but Heineman has shown really nice progression from his rookie SHL season.

It would’ve been nice to see Huckins take a bigger offensive step in his Draft+1 year, but he’s one of the more consistent players in the Flames system right now.

Scouts love Jordan because of his smarts and skating, but his offensive output has yet to really explode. Here’s hoping the second half of his WHL season sees him stay healthy and live up to the potential that many believe that he has.

It’s hard not to be impressed with Kerins’ offensive step forward in his Draft+2 season after playing just four games in his Draft+1 year.

Kinnvall is nearing a return from a gnarly pre-season injury. Hopefully he can produce anywhere close to what his last few seasons suggests he has in him.

Kirkland is reliable depth in the AHL. But given his age and his (lack of) offensive progression, he’s probably topped out. He’s set to become a Group 6 free agent this summer.

Koumontzis hasn’t been a huge needle-mover offensively in college, with his NHLe peaking in his freshman year.

It’s probably not fair to draw any conclusions from four QMJHL games, but hopefully they can continue some nice offensive progression for Kuznetsov since his Draft-1 season.

Mackey has been, production-wise, just as good in the AHL as he was in college. It’s actually pretty remarkable how consistent he’s been given he’s jumped right into pro hockey during a pandemic.

It’s hard to put your finger on Nikolaev because he’s played in one league over the past four years that has produced enough NHL players to have an actual NHLe. But he’s been pretty good for Tri-City.

Nodler has made some nice progress in college, though his offensive production is still somewhat modest relative to other college players.

We’ve said this a lot, but it’s hard not to be impressed with Pelletier. Usually you see a production dip when a player, even a really good one, jumps from junior to the pros. But Pelletier has gotten significantly better.

Pettersen had the “going pro dip” last season, and his numbers have eroded a bit more this season.

Phillips is a very good AHL player. If the worst thing you can say about him is “Well, his production dipped during the pandemic…” you know he’s been productive.

Philp is basically the forward version of Connor Mackey, in that his production is consistent over the past few seasons.

Poirier has remained a consistently productive offensive defender over the past few seasons, though one would hope for a bit more progression since being drafted.

Poolman has developed into a wholly unremarkable (from an offensive standpoint) defender.

If only he could stay healthy. After his initial “going pro dip,” Pospisil has shown some steady offensive progression.

Ruzicka had his “going pro dip,” followed by three seasons of pretty nice progression. He’s in the NHL now, albeit on a recall.

On one hand, Solovyov has taken small steps backward offensively over the past few seasons. On the other hand, he’s moved into progressively tough leagues in that span so that step backward makes a lot of sense.

Strömgren has bounced around a lot over the past few seasons and his offensive production seems to have taken a step back this season.

Tuulola is offensively about where he was two seasons ago.

Whynot is about where he was offensively last season.

Zary’s catching up offensively after a slow, injury-delayed start to the AHL season. He showed really steady progress over the prior three seasons.

Zavgorodniy has a small KHL sample, so it’s hard to judge yet. He’s a so-so AHLer, but was a great junior player.