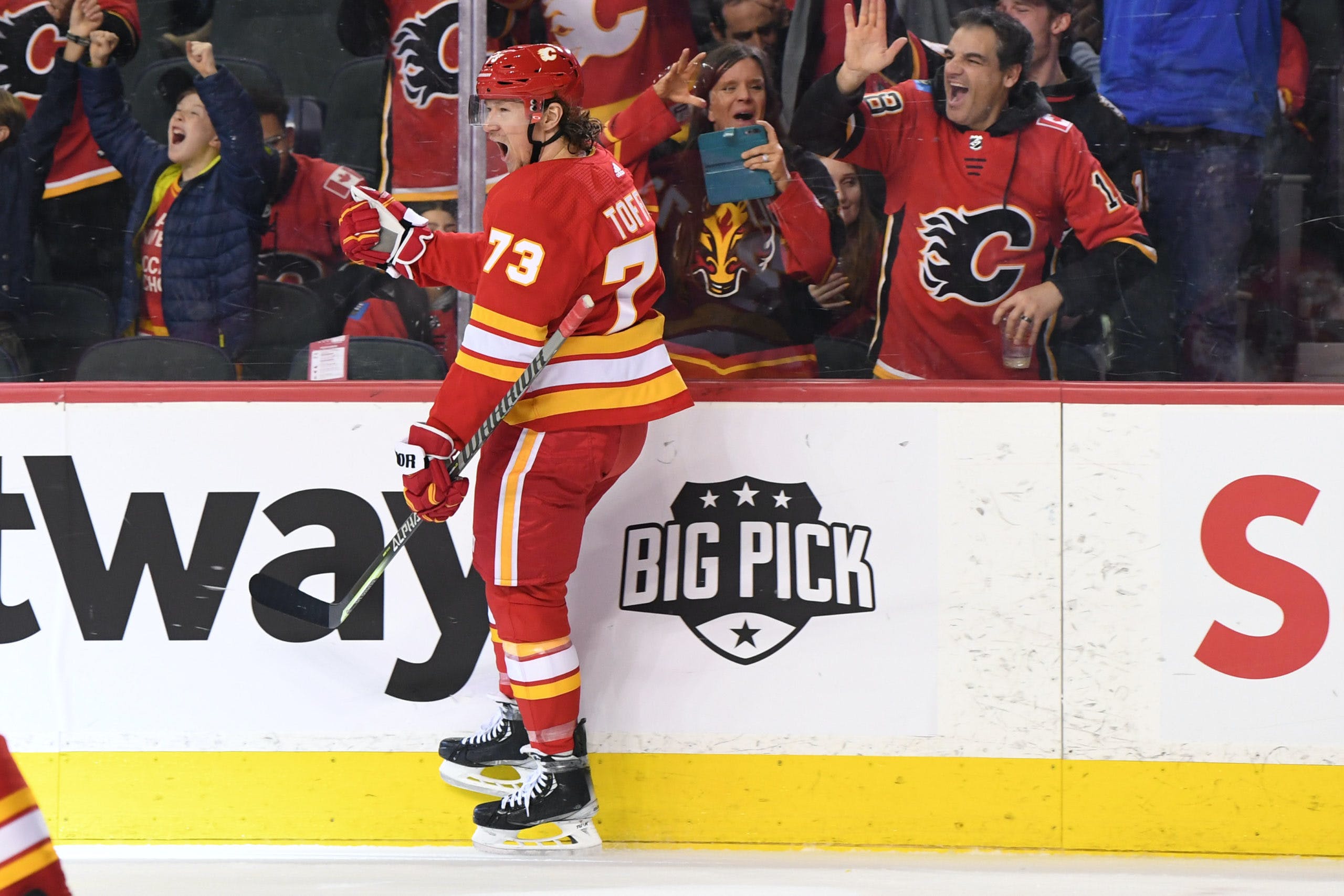 By Ryan Pike
9 months ago
The Calgary Flames have completed 49 games of their 2021-22 regular season schedule, the equivalent of seven seven game segments. Their seventh segment saw them go 7-0-0 over seven games, capturing 14 of a possible 14 points.
Underlying numbers via Natural Stat Trick.
Previous segments:
So far this season, the Flames have had one bad (sub-.500) segment, two segments right at .500, and four segments well above the .500 mark. Over their last two segments, they’re 12-2-0, and they’re 15-6-0 since returning from their COVID stoppage after Christmas.

(Percentage stats in this table are 5v5 and via Natural Stat Trick.)
First and foremost, the results: the Flames won every game in regulation. That’s great! No notes.
Secondly, the process: the Flames were the leaders in most five-on-five possession metrics in six of seven games, and relied on goaltending and timely scoring to win the Toronto game. It would’ve been better had they dominated all metrics for all games, but that’s an obvious nitpick. Great work there.
Their special teams were overall quite good, allowing just one opposition power play goal over seven games and scoring five. Their possession metrics were less gaudy than they were in the previous segment, but the Flames were luckier at five-on-five than they had been earlier – pucks went in for them and stayed out for the other team – but their special teams also gave them breathing room had their luck ran out. (It didn’t, so many of these games were not close. At all.)
If you place the playoff cut line at 95 points, the Flames would need about 57 points (56.8) after 49 games to be on track. They have 66 points so far, which is about nine points ahead of the pace they’d be looking for. (A few models are placing the playoff cut line lower than 95 points, so the Flames may or may not be at a playoff pace depending on whatever model you prefer to use.) They’re in good shape.

Here’s how the Flames compare within the Pacific Division through 42 games (all rankings out of eight teams):
In terms of process, the Flames are among the best teams in the league at generating quality chances and one of the better teams in the league at suppressing quality chances by the opponents. Their goaltending is top-notch, probably helped somewhat by not facing a crazy amount of good chances. Their shooting percentages are improving, but they have the benefit of constantly out-chancing their opponents, so even a small percentage of many, many chances results in many goals.
In terms of results, they’re in the top third of the league in goals for, goals against, power play and penalty kill. This is a team that is both good and lucky, in the sense that they have high percentages overall, but they’re boosted by the fact that these high percentages are being propped up by some really strong play on both sides of the puck.

First, the forwards (all situations, ordered by ice time). Last segment’s figures are in brackets.
Game scores: Positive values indicate positive impact, negative values reflect negative impact.
The most common Flames forward lines were (in descending order):
The big change over the last seven games was the addition of Tyler Toffoli, who took Tyler Pitlick’s roster spot and Brett Ritchie’s spot in the lineup. He’s an upgrade, though, and it’ll be interesting to see how he improves as he becomes more integrated into the attack.
As in prior segments, there’s a pretty obvious demarcation between the top line (who are elite and among the best players in hockey), the second three forwards (who are very good), and everybody else. Adam Ruzicka’s performance stands out among the bottom six grouping due to his offense, but everybody else in the bottom six has a pretty solid average game score and nobody really has any significant blemishes.
As noted in the team-wide results, on a player-by-player basis you can see a segment-to-segment spike in PDO. This reflects both on-ice shooting and save percentage jumping for basically everybody. Toffoli is the only player without an impressive PDO, suggesting that he’s brought some rough puck luck with him from Montreal. Presumably that’ll rebound, but his underlying numbers (so far) are quite solid.
Now, the defence (all situations, ordered by ice time):
The most common defensive pairings were (in descending order):
The defensive pairings have been set in stone for the past while.
As with the forwards, not much to quibble about here. The Andersson/Hanifin and Gudbranson/Zadorov pairings were very good, while Tanev/Kylington were merely good.
And finally, goalies (all situations):
A segment ago, we pondered if Markstrom had another gear. The answer? Yes. He was improved slightly across the board, leading to a pretty excellent .953 overall save percentage. Vladar played a full game and delivered a rock-solid performance.
The Flames are firing on all cylinders right now. The big question is if they can improve their underlyings back to their earlier, higher levels. Doing so would make them a little bit less reliant on puck luck to capture victories.