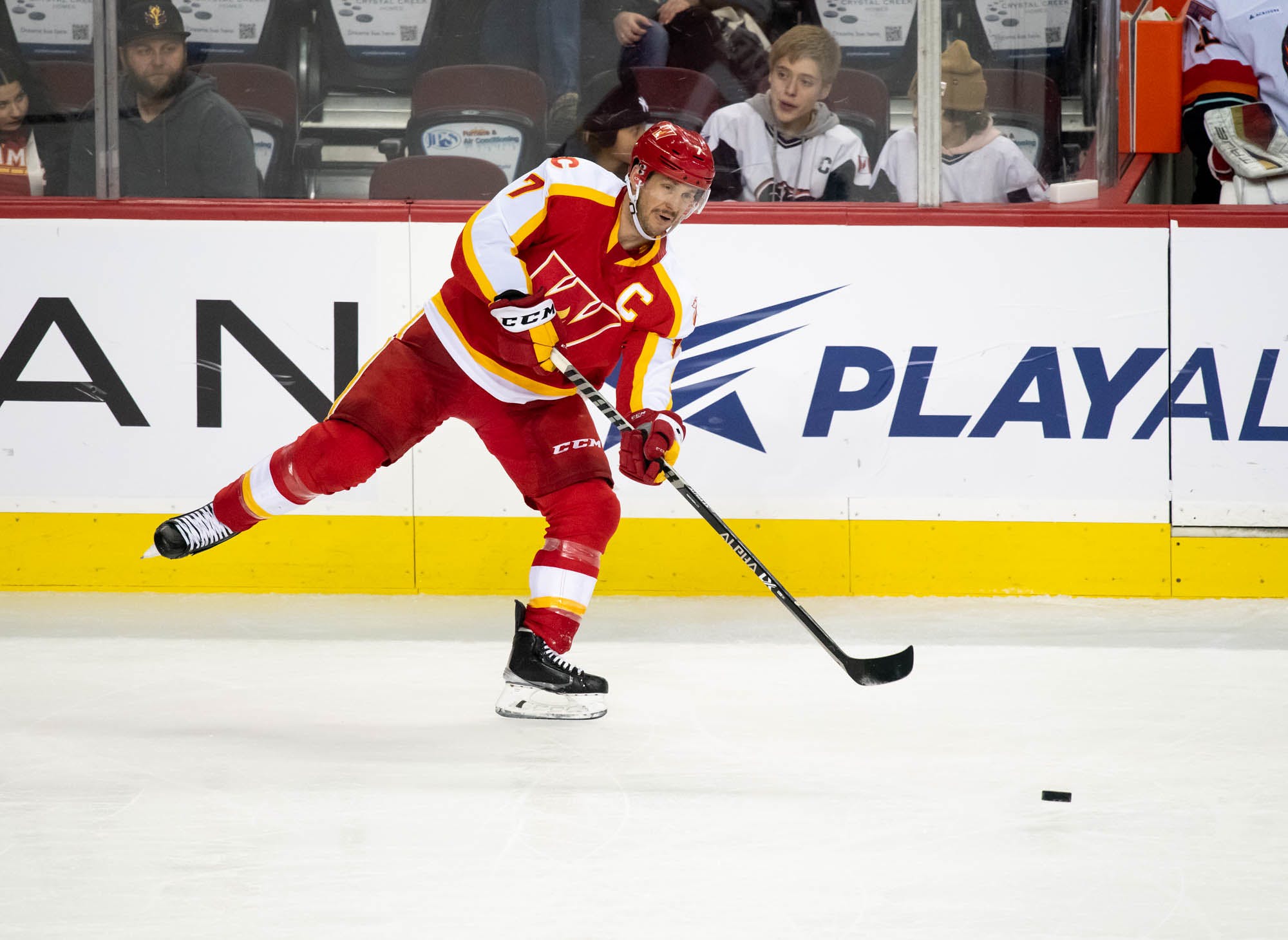 By Mike Gould
1 month ago
It’s going to be a special night at the Scotiabank Saddledome as Calgary Wranglers captain Brett Sutter takes to the ice for his 1,000th game in the American Hockey League.
Sutter, 35, will become just the eighth player in history to hit the millennium mark in the AHL. He previously surpassed 1,000 professional games (NHL and AHL combined) while playing with the Ontario Reign during the 2021–22 season.
This year has been both a homecoming and a resurgence for Darryl Sutter’s elder son, who made both his AHL and NHL debuts in the Calgary Flames’ system more than a decade ago. Through his first 25 games with the newly-relocated Wranglers, Brett has 16 points — putting him on pace for one of the best statistical seasons of his career.
“I just came in with a fresh start, some excitement,” Sutter told FlamesNation. “I’m getting the chance to play with a lot of really good players and probably play [with] a little bit more ice time than I have the last couple of years in L.A.
“Just excited to come to work every day and excited to be out there, Sutter added. “It always makes it easier when you’re winning to find an extra jump in your step.”
Boy, have the Wranglers been doing a lot of winning this season. They currently boast a 17–7–1 record and are one of just three teams in the league with a point percentage of at least .700 through the first two months.
Sutter, of course, scored the game-winner for his Wranglers against one of his former teams in his 999th AHL contest, taking a back-door feed from Connor Zary and beating Reign goaltender Cal Petersen for his fifth goal of the season late in the first period on Tuesday.
The Flames originally selected Sutter back in the sixth round of the 2005 NHL Draft, although he’s worked his way around North America with multiple different organizations since then.
The Viking, AB product has played for six teams in the AHL and three in the NHL during his 16-year career. He scored his first of two NHL goals as a fresh-faced Flame way back in the 2008–09 season.
Now, it’s the new generation of up-and-coming young Flames that’s leaning on Sutter for guidance.
“He’s been awesome,” third-year forward Emilio Pettersen told the media after a recent game. “It’s not easy, playing as many games as he has, coming into a new group, a fresh group. He’s just such a calming guy and he’s been great to have.”
Sutter has also served as a measuring stick figure for the other members of the team’s leadership group.
“He does everything out there, in the D-zone, penalty kill, power play, faceoffs,” Wranglers alternate captain Nick DeSimone said. “Any line that he’s on, he contributes. He can do just about anything.”
Most of all, Sutter has a close connection with Wranglers head coach Mitch Love, who has been adamant from the first day of training camp many months ago that No. 7 is his team’s true leader.
Love and Sutter go back many years. In fact, they once fought back in 2009 in an AHL game featuring two teams — the Quad City Flames and Houston Aeros — that no longer exist.
Asked about Sutter after a recent Wranglers win, Love started with a familiar refrain.
“Well, he’s just our captain,” Love said. “Numbers aside, what he provides our group in the room, on practice days he’s often one of the hardest-working guys we’ve got. He’s 35 years old. It’s fun to watch.
“He’s been a pleasure to work with. He’s a great extension of our coaching staff.”
You’ll be able to catch the Wranglers’ game against the Reign — Sutter’s 1,000th AHL contest — at the Scotiabank Saddledome or on AHL TV at 7:00 p.m. MT on Wednesday evening. You can purchase tickets on the Wranglers’ official website.
Editorials
Recent articles from Mike Gould