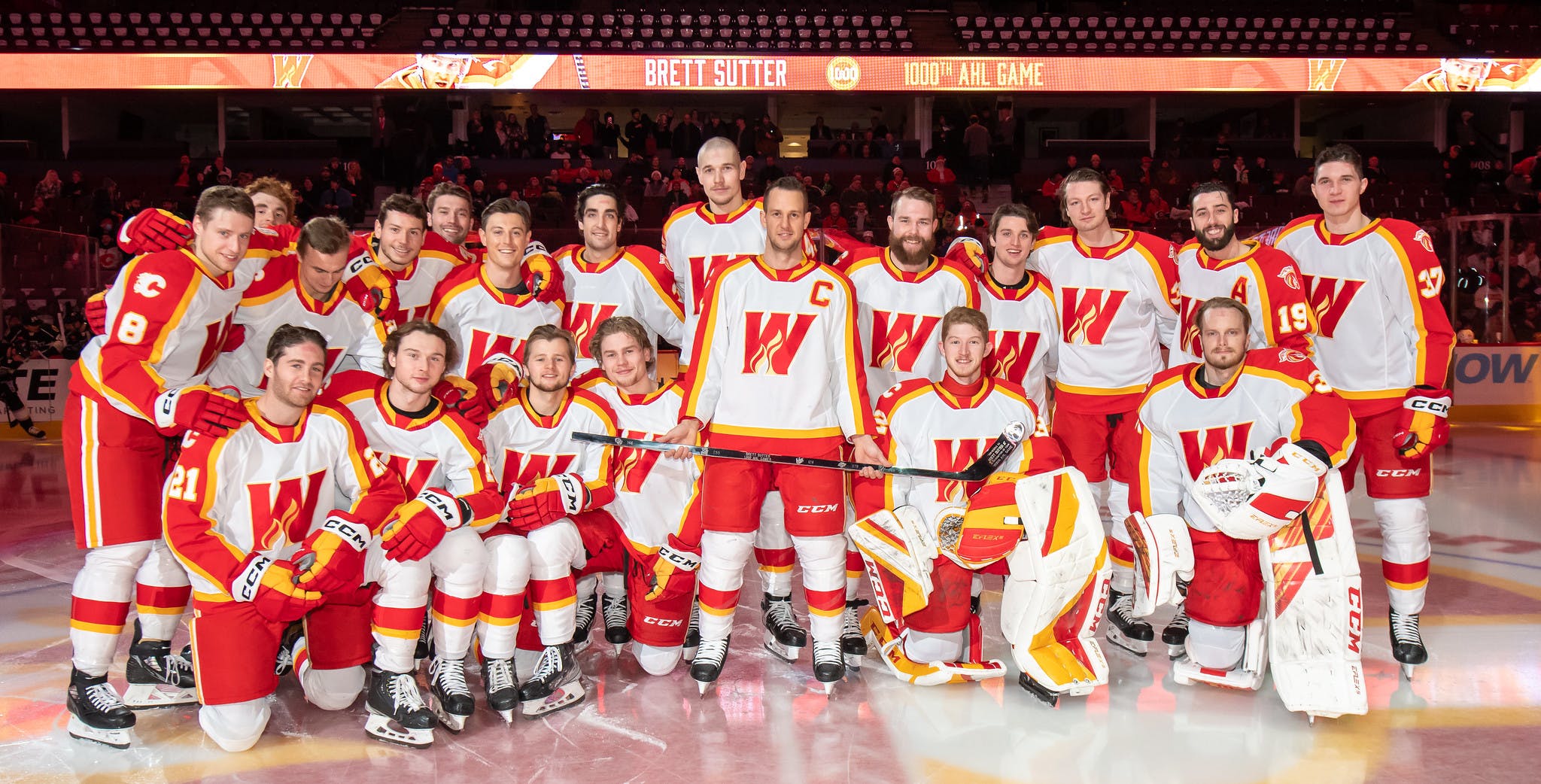 By Paige Siewert
1 month ago
The Calgary Wranglers played the second half of their two-game series on Wednesday night and their last game before the Christmas break. This game landed on an especially special night for the captain in particular. Brett Sutter took the ice and officially hit the 1,000th game mark for his AHL career becoming only the eighth player in history to do so. He hit this milestone against his former team of seven years and scored the game-winning goal in their 5-2 victory.

Before puck drop, Brett Sutter got a lengthy tribute for his 1,000th game. His career was highlighted on the video boards, he was presented with some keepsakes and silver sticks for him and his kids and ended the celebrations with a team photo. Stick taps came from each side and the fans in the building applauded.
He almost added another special moment after the game got going. He appeared to have scored 3:37 into the game. Sutter did a small celebration with his team and still went up the bench for some fist pumps. However, the game officials reviewed the goal and it was waved off.
Later in the period, Walker Duehr was called for holding then the puck was in the back of the Wranglers’ net 23 seconds later. Wolf was getting pelted with pucks in the first and something finally gave. The score stayed 1-0 Reign after the opening 20 minutes came to a close and the Wranglers were being outshot 20-10.
In the second period, Ontario struck again just 4:01 into the period. The Wranglers got a couple of power plays after this goal to try and get some scoring going themselves but were not successful until just a second after a Reign penalty expired. Jakob Pelletier scored first for the Wranglers 9:51 into the second period with assists going to Martin Pospisil and Connor Zary.
No more scoring occurred in the second period but Kevin Rooney was getting a little involved in some pushing and shoving late in the period that was broken up when the buzzer signalled the end of the second period.
This resulted in a four-on-four to start the third period. Those offsetting penalties came and went then Adam Klapka tied things up 2:35 into the period.
1:07 later, the man of the night, Brett Sutter, scored the go-ahead goal for the Wranglers, shorthanded at that too. You could see all over his celebration how great that goal felt.
If you left your seat or took a snack break during this couple of minutes, you couldn’t have picked a worse time. 1:20 after Sutter’s goal, Kevin Rooney scored his first of the season for the Wranglers, also shorthanded.
The Wranglers managed to score more in 2:17 than they had all game and very quickly took a 4-2 lead over the Reign.
They were able to sneak one more goal in the dying minutes when Connor Zary buried an empty-netter. Dustin Wolf ended up stopping 38 of 40 shots in this game. The Wranglers swept the series and the three-star recognition. Adam Klapka was given the third star of the night, Kevin Rooney was awarded the second star and Brett Sutter earned the first star of the night. Quite a high note going into the Christmas break.

The Wranglers will have a week between their next game to get some Christmas celebrations in with their family and get back to work on Wed., Dec. 28. They will hit the road to warmer California to play the Bakersfield Condors for a two-game series and another game against the Reign on New Year’s Eve. Wednesday’s game is set to start at 6:30 p.m. MT.
News
Recent articles from Paige Siewert