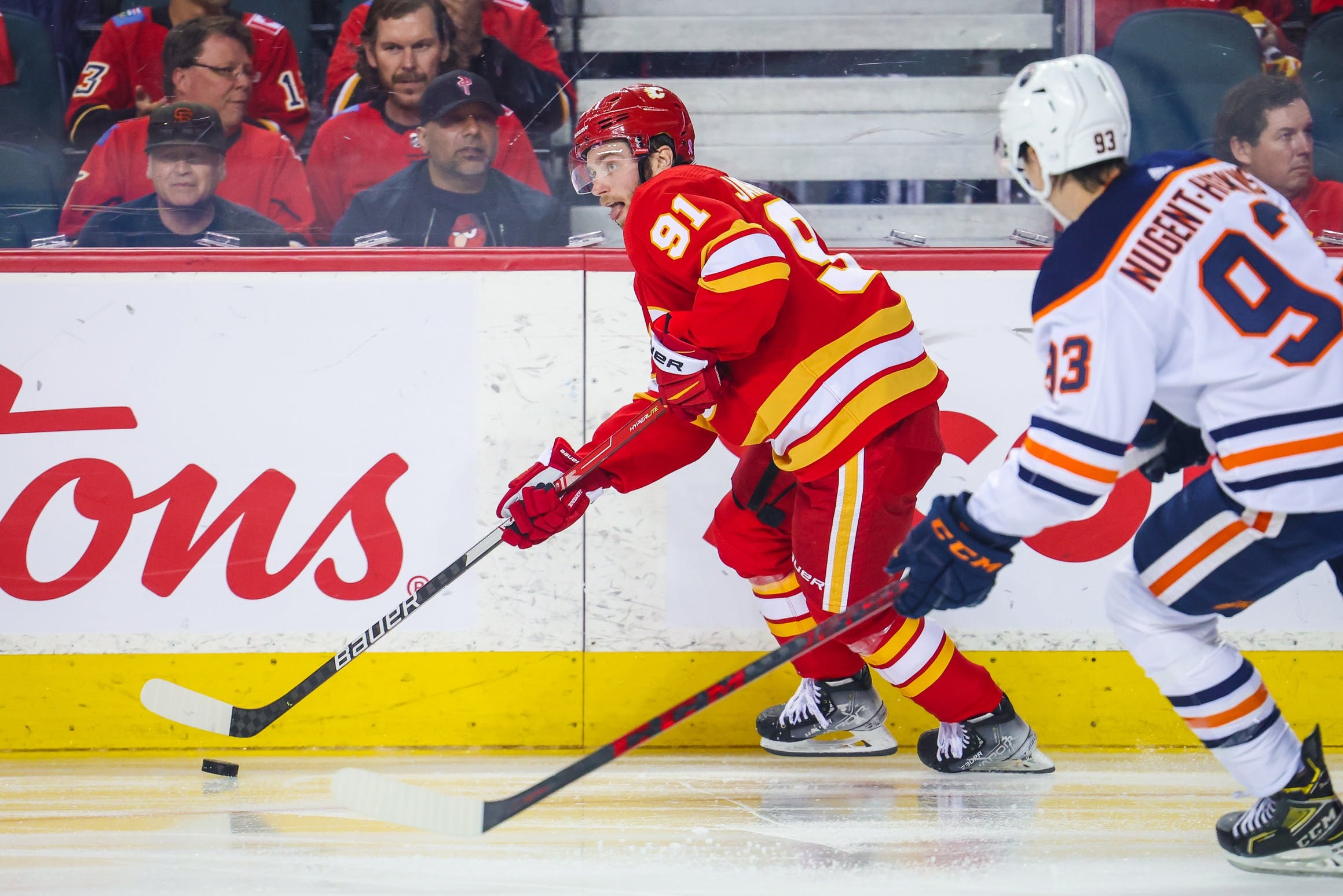 By Ryan Pike
7 months ago
On paper, it made complete sense. With the Calgary Flames heading towards the post-season and needing some forward depth, they looked to the lowly Seattle Kraken and acquired Swedish centre Calle Jarnkrok. A right shot centre who is Elias Lindholm’s first cousin, Jarnkrok seemed to fit the Flames’ needs like a glove.
But even the best laid plans sometimes to awry, and Jarnkrok was merely “good” with the Flames over a combined 29 regular season and playoff games.

A product of scenic Gälve, Sweden, Jarnkrok grew up in the same town as Jacob Markstrom and cousin Lindholm. He came up in hockey as a toolsy two-way forward in the Brynas system, establishing himself as a really reliable defensive forward and a fairly decent secondary offensive option at various levels. He was a second-round selection, 51st overall, by the Detroit Red Wings in the 2010 NHL Draft.
Jarnkrok played three seasons with Brynas after being drafted, eventually coming over to North America to join the American Hockey League’s Grand Rapids Griffins late in the lockout-shortened 2012-13 season. The following season, he played well with the Griffins and was traded to Nashville in March as part of a trade that made David Legwand a Red Wing. He made his NHL debut a couple weeks later, and made the Predators’ roster full-time out of training camp in 2013-14.
Once he settled in, Jarnkrok carved out a good niche for himself. He played regular second and third line minutes, contributing both at centre and on the wing as needed. He chipped in on both sides of special teams, playing usually on Nashville’s secondary units for their power play and penalty kill. He was a steady offensive contributor, consistently chipping in around 0.42 points per game like clockwork over seven seasons.
Nashville opted to protect three forwards and five defencemen in the Seattle expansion draft, which left Jarnkrok exposed (along with Matt Duchene, Mikael Granlund, Erik Haula and Ryan Johansen). The Kraken opted to select Jarnkrok, who had one year remaining on his contract with an affordable $2 million cap hit.

The Kraken simply didn’t have a good expansion season. They battled injuries, COVID positives, and the team just didn’t gel all that well on the ice. Not every expansion team is going to be Vegas, unfortunately.
Jarnkrok missed some time with Seattle during the season, playing in just 49 games prior to the trade deadline, but when he was in the lineup he was one of the more consistent players. As he did in Nashville, he played all over the place, but was really solid with 26 points over those 49 games.
Based on the things Nashville liked about Jarnkrok, and that Seattle liked about Jarnkrok, it’s probably no surprise that the Flames were interested in Jarnkrok leading into the trade deadline. They acquired him in the days leading up to the deadline, sending a 2022 second-round pick, a 2023 third-round pick, and a 2024 seventh-round pick to the Kraken in exchange for Jarnkrok with half of his cap hit retained.
With the Flames, Jarnkrok played exclusively as a third line centre – primarily playing with Dillon Dube and one of Tyler Toffoli or Blake Coleman. He had four assists over 17 regular season games and one goal and three assists in 12 playoff games. All-told, Jarnkrok had fairly strong underlyings in a relatively small sample size with the Flames – 51.6% expected goals in the regular season and 57.6% expected goals in the playoffs.
But despite strong underlyings, Jarnkrok and his linemates couldn’t translate that into offence. Jarnkrok did everything but score a bunch with the Flames, but man, it really would’ve helped the Flames for him to score in the playoffs.

On July 13, Jarnkrok’s contract will expire and he will become an unrestricted free agent.
It’ll be interesting to see what happens with him. On one hand, his cousin and a close friend are signed long term with the Flames, and Jarnkrok was a pretty useful player for the Flames despite not scoring a ton. If he was willing to come back on a reasonable deal, he could be an asset for the Flames as they try to run it back. (The Flames’ cap situation is obviously dependent on new deals for Johnny Gaudreau and Matthew Tkachuk.)
That said, even at a heavy discount Jarnkrok would come in at a fairly decent cap hit – Evolving Hockey estimates his next deal at four years at a $4.429 million AAV, but even a one year deal is projected at $2.229 million. That’s likely more than double internal options like Adam Ruzicka, and given the Flames’ cap situation, perhaps they could opt to go with the less expensive, younger option – especially if Gaudreau and Tkachuk get hefty new deals this off-season.
If Jarnkrok doesn’t return, though, it won’t be because he wasn’t good for the Flames. He wasn’t great, but he was far from a detriment. If he ends up playing elsewhere, it will probably be because he was a luxury the Flames couldn’t afford given the many, many big raises they’re due to give out this summer. But if they can ship out some salary in all their summer moves, Jarnkrok could again find himself in a red sweater in the fall.