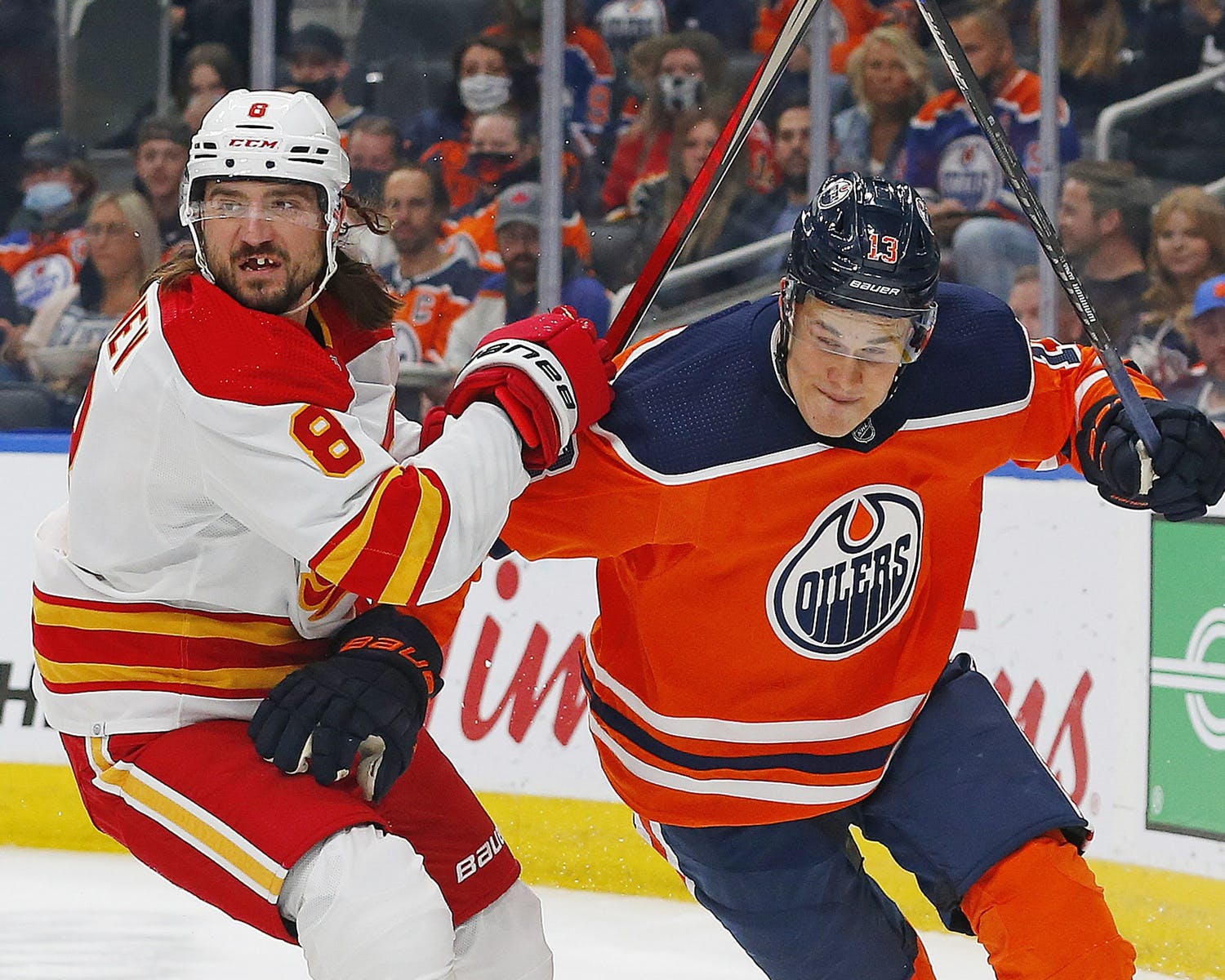 By Ryan Pike
8 months ago
There’s two things we know about Chris Tanev. First, he has a reputation for playing through some gnarly injuries. Second, he’s missed the past three playoff games for the Calgary Flames. Thus, our conclusion right now is whatever injury (or injuries) he suffered against Dallas, they’re pretty nasty.
Tanev being hurt enough to miss games has created a big hole for the Flames, as they attempt to cover his minutes.
Here’s a quick snapshot of how the Flames have distributed their blueline minutes during the post-season.

Six defenders (Tanev in, Stone out)

It’s important to note that the numbers are skewed a bit, as Rasmus Andersson got ejected from Game 1 against Dallas for his fight with John Klingberg after one period, which bumped up Tanev and Erik Gudbranson’s minutes a tad. But Tanev played primarily with Oliver Kylington at five-on-five, and the Flames basically just rolled three pairings at even strength.
On special teams, the usual PP defenders were Andersson and Hanifin, both as the single defenders on four-forward units, but Kylington was paired with Tanev (with three forwards) when Andersson was ejected and Hanifin moved up to the top unit. The PK pairings were usually Tanev/Gudbranson and Andersson/Hanifin, which were shuffled to Zadorov/Gudbranson and Hanifin/Tanev without Andersson in Game 1.

Seven defenders (Tanev and Stone in)

For Game 4, Darryl Sutter inserted Michael Stone as a seventh defender in place of fourth line forward Brett Ritchie. Sutter’s logic was that his defenders seemed a bit fatigued and Stone could spell them off. As you can see, that’s more or less what happened. He rotated in on the right side for Gudbranson, Tanev and Andersson at five-on-five, which kept those three guys fresh for penalty killing. (Stone also played with Hanifin on the second power play unit.)
The numbers are skewed a tiny bit, because Tanev missed the third period of Game 6 against Dallas.

Six defenders (Stone in, Tanev out)

This is the current state of things. The top two pairings are pretty well-established (Hanifin/Andersson, Zadorov/Gudbranson), with Kylington primarily playing with Stone but Zadorov also taking shifts with Stone from time to time.
On special teams, Andersson remains the PP quarterback for the top unit (one defender, four forwards) and Hanifin plays with Stone on the second unit (two defenders, three forwards). The two PK units are anchored by the top two even strength pairings.
No Tanev has really put a lot of extra responsibilities on the top two pairings, especially in games where there are a lot of special teams play – Kylington doesn’t play on either side of special teams, so it effectively shortens the bench and forces them to lean on the top four heavily.
It goes without saying that the Flames would prefer to have Tanev in their lineup, but their defensive group and its deployment is much more balanced and sustainable with him in the lineup than in the infirmary. They have a significantly better chance of eliminating Edmonton with him in the lineup.