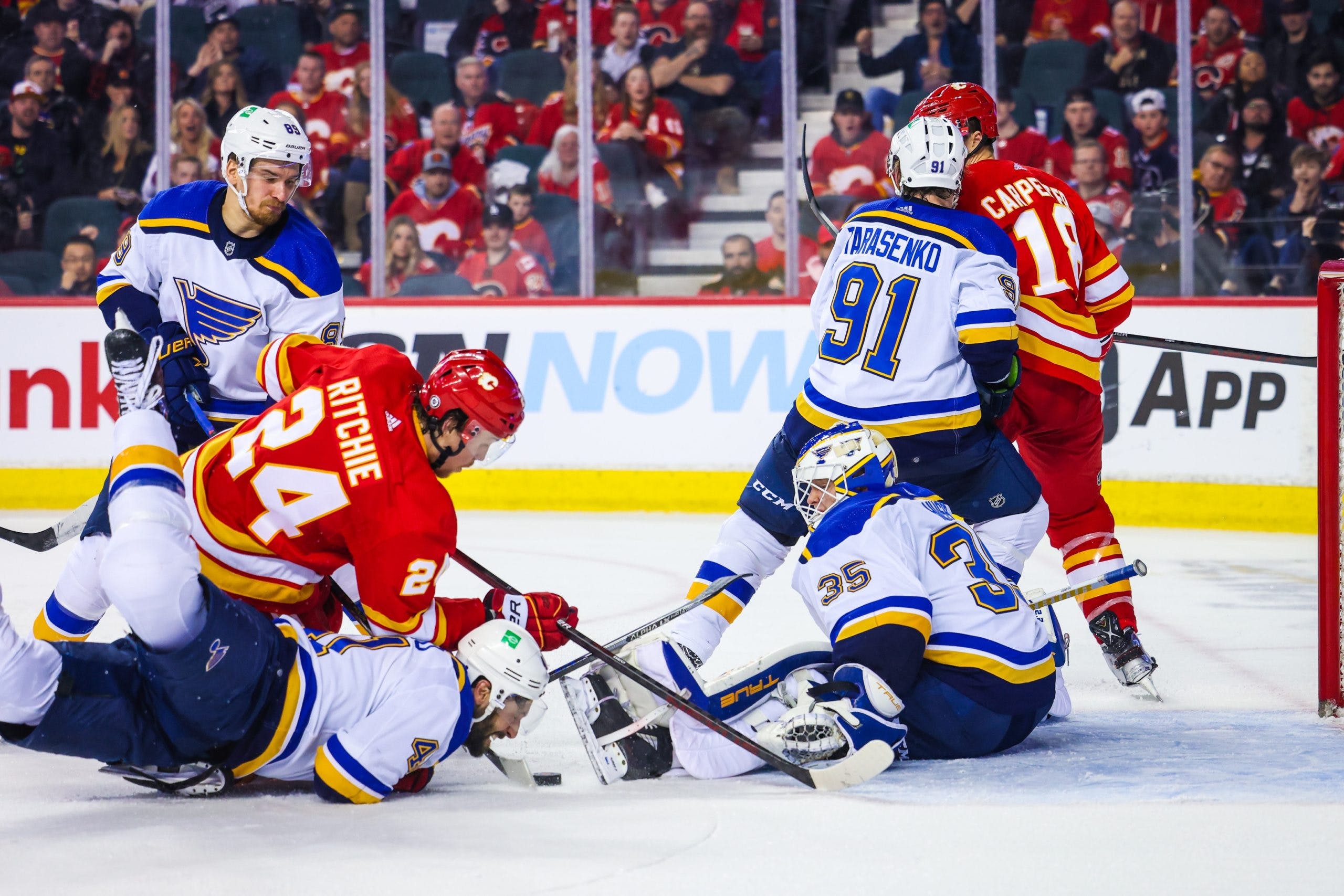 By Ryan Pike
10 months ago
The Calgary Flames battled back in a back-and-forth Saturday night game against the St. Louis Blues. But the Flames couldn’t avoid key lapses at tough times, losing to St. Louis by a 6-4 score.
The recap is here, if you missed it. Here are the highlights and post-game comments from Saturday night.

Associate coach Kirk Muller
On how the game turned against them: “Well, I think the big thing is when we got scored on. If you look at our team and our identity all year, it’s we want to be a team that knows how to check, a lot of pride in D-zone coverage and playing well without the puck. Some lost coverages that we had in the wrong situations. First shift of the first period. Then they score at the end of the first period and late in the third. Sometimes it’s the timing of the goals that hurt you, and those lost coverages cost us even though you look at the shots and the offensive stuff. It’s how we play without the puck that’s going to make this team win hockey games.”
On the mistakes creeping into their games recently: “They know, the mistakes that have been made the last few games from our team. And we’ve just got to stay on it. All year long the guys have been good at their assignments and coverage and all that. St. Louis is a straight-line, simple team and they work hard. It’s nothing that we haven’t seen, it’s just tighten it up and being aware, and like I say, recognizing this time of year, every little play, it matters, and just fine-tuning your details.”
On Brett Ritchie’s status after leaving the game in the third period: “From what I understand, lower body injury. I haven’t had a chance to see him, but that’s what I’ve been told so far.”
Milan Lucic
On how the game turned against them: “Lost coverage a few times. Gave up chances in the slot. That was basically it. Coverage that we’ve been really good at all year. Just gotta clean it up.”
On handling losses when the team’s out-playing the opposition but making costly mistakes: “It’s just a matter of sticking with it, right? if you get frustrated and start trying to do to much, start trying to do someone else’s job, that’s when you get away from your game plan and get away from your identity. Probably a good time for a road trip here. Feels like we haven’t been on a road trip for two months. So, as much as we love playing in Calgary in front of our home fans, it’s nice to get away and freshen things up a bit. So we gotta approach this road trip like we did the first one at the start of the year when we went to Detroit, and get our game going again.”
Noah Hanifin
On if the Flames out-played the Blues: “I thought we did a lot of good things. I think like Looch touched on, I think the few chances they had they capitalized on. That’s something we have to clean up. I think in the second period they had like 10 shots, but we were giving them good chances, you know, and that’s something we can’t allow especially with the identity of our team. That’s something we don’t normally do. i think for the back end, i think we can do a better job of killing plays down low and not giving them that much time and to make those plays into the slot. Like Looch said, we’ve got a big game coming up Monday where we can get back on track here against a big divisional opponent. Gotta get ready for that.”