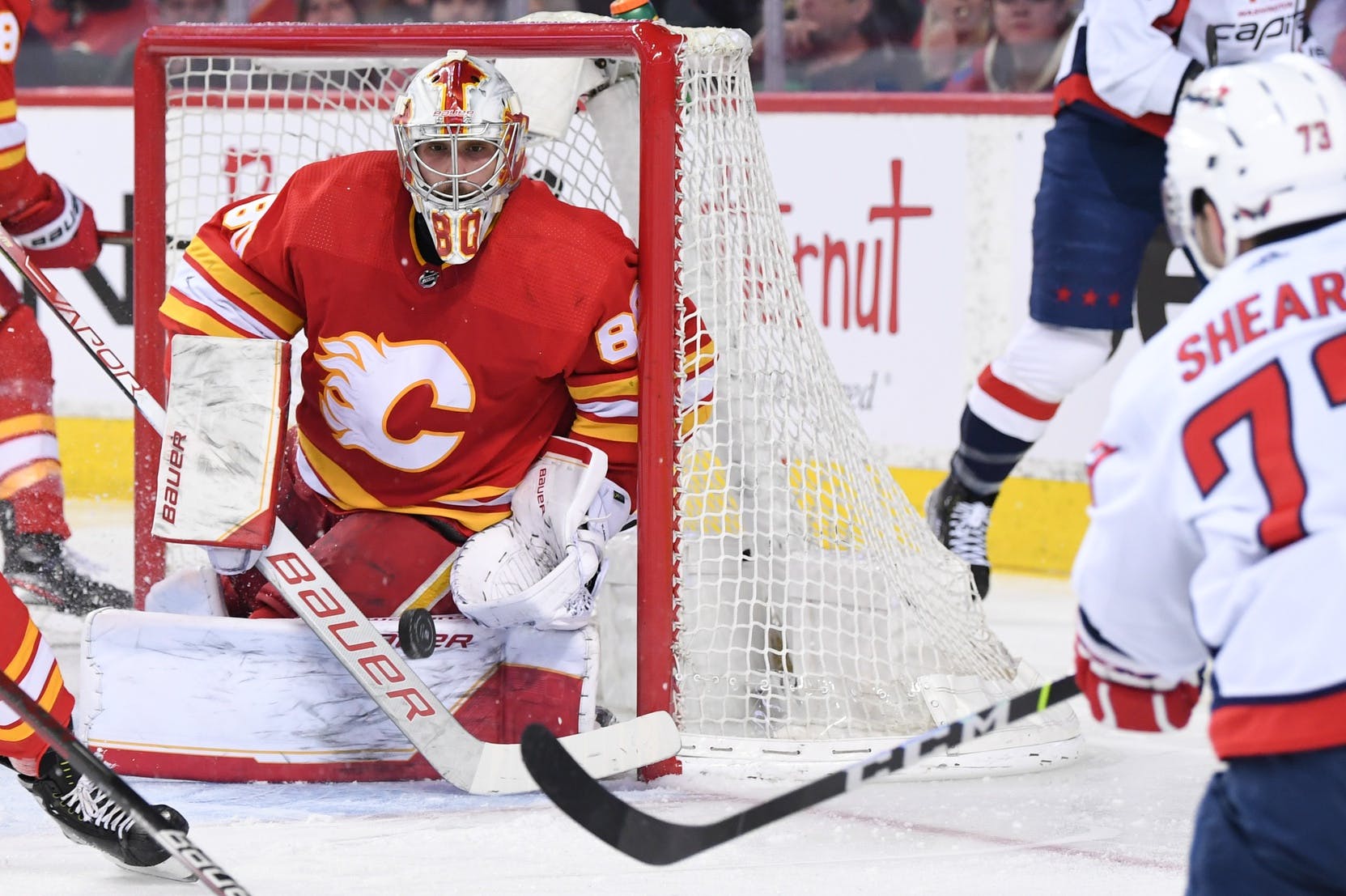 By Ryan Pike
7 months ago
Being a backup goalie is a tough gig, especially when you’re playing behind a workhorse netminder who plays a ton. In 2021-22, the Calgary Flames added young Czech netminder Dan Vladar as their new backup backstop. He didn’t play a ton, but he ended up giving the Flames a whole lot of value in the backup position.

A product of Czechia, Vladar came up through the Kladno system – y’know, the team that Jaromir Jagr owns. After working his way through the club’s U16, U18 and U20 teams during his youth, he made his pro debut in the 2014-15 season as Kladno played in Czechia’s second tier. He started for Czechia at the World Under-18s and the Ivan Hlinka tournament, and was named to their World Junior roster (but never played). For his efforts, he was a third round selection by the Boston Bruins in the 2015 NHL Draft.
Vladar came over to North America in 2015-16 and played a season with the USHL’s Chicago Steel, then signed his entry-level deal with the Bruins. Because he was 19 when he signed, the Bruins gained a slide year on his deal so he was able to play four years within their system on his entry-level deal. He worked his way up through the Bruins system, playing in the ECHL and AHL before making his NHL debut in relief during the 2020 Stanley Cup playoffs.
Following his entry-level deal, he signed a new three-year deal with the Bruins in the 2020 off-season. With the Bruins dealing with injuries in net in 2020-21, Vladar and Jeremy Swayman both spent time on the NHL roster: Vladar played five games and Swayman played 10. With Vladar’s waiver exemption expiring after the season, the Bruins had a decision to make.

The Bruins opted to trade Vladar to the Flames for a third round pick in July 2021, rather than potentially lose him on waivers – their preferred goaltending tandem appeared to be Linus Ullmark and Swayman. The Flames didn’t really have a deep bench of young, inexpensive NHL-ready netminders, so the move seemed to be a low-risk gamble.
The gamble largely paid off. Vladar played 23 games and posted a 13-6-2 record with two shutouts, a 2.75 goals against average and a .906 save percentage. For an organization that’s really struggled to find steady back-ups, he provided them with rock-solid (if largely unspectacular) netminding while playing primarily on the road, often in the second half of back-to-backs.
Of the 74 NHL netminders who appeared in 10 or more games in 2021-22, Vladar was 39th in save percentage and 26th in goals against average. He was the Flames’ second-best goaltender, but his job was about making sure that the team could get the most they could out of Markstrom. Of the aforementioned 74 goalies, Markstrom was fourth in save percentage and third in goals against average. It’s hard to argue that Vladar didn’t accomplish what he was tasked with by the Flames’ brass.

Vladar will play the final year of his current contract in 2022-23, which will see him carry a minuscule $750,000 (league minimum) cap hit. After the season, he’ll be a restricted free agent will arbitration rights. He’ll probably become a bit more expensive after his deal expires, but playing behind Markstrom it’s unlikely he’ll play enough for his arbitration case to become especially strong.
Vladar’s long-term future with the Flames probably depends on what kind of trade market emerges for him in the next year or so, as well as how much progress newly-minuted AHL goaltender of the year Dustin Wolf makes in the minors. If Wolf keeps impressing, the Flames might just try to flip Vladar for some assets and open up a spot for their top (goaltending) prospect.
But for now, the Flames have two good young goaltenders and an abundance of options moving forward.