Don’t worry too much about Jacob Markstrom’s tough start 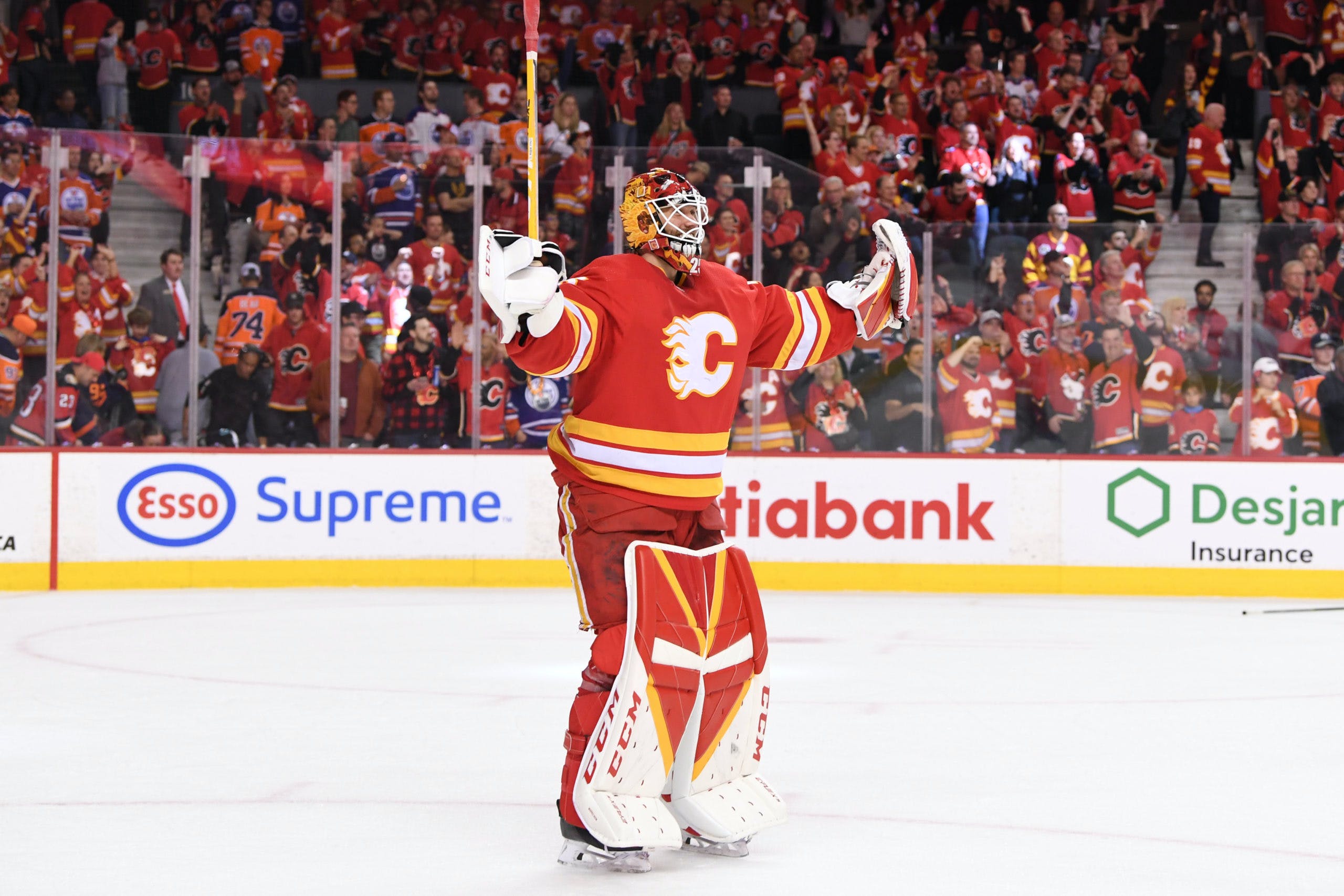 By Ryan Pike
3 months ago
Heading into Monday’s slate of games, Calgary Flames goaltender Jacob Markstrom was in interesting company. A dozen goaltenders in the league entered Monday with 3 or more wins, and Markstrom was among them.
While Markstrom has the worst collective statline of the 12 goalies with 3 wins or more, right now it doesn’t seem to be anything to worry about too much.
The 12 goalies with 3+ wins heading into Monday were (in save percentage order) Jake Oettinger (Stars), Carter Hart (Flyers), Tristan Jarry (Penguins), Jordan Binnington (Blues), Ilya Samsonov (Maple Leafs), Linus Ullmark (Bruins), Alexandar Georgiev (Avalanche), Anton Forsberg (Senators), Mackenzie Blackwood (Devils), Igor Shesterkin (Rangers), Darcy Kuemper (Capitals), and Markstrom.
The two goaltenders who were voted to the year-end all-star teams are currently rocking save percentages of .901 (Shesterkin) and .882 (Markstrom). Markstrom’s 2.93 goals against average is the second-highest of the 3+ win crew, and his .884 even strength save percentage is the lowest of the bunch, too.
If you’re arguing that Markstrom’s performances haven’t been great so far, you’re not wrong. But I’m also not sure that Markstrom’s fully been comfortable or in the groove in net yet.
Speaking prior to the game in Edmonton, here’s what head coach Darry Sutter had to say about the division of starts between Markstrom and backup Dan Vladar early-on: “When Marky was under the weather last game we thought about playing [Vladar] against Colorado and then Marky here. But he chose Game 1, so this is game 2.”
Markstrom missed a practice prior to the home-opener, then played against Colorado. He hasn’t missed any subsequent practices to date, and he’s started against Vegas, Buffalo and Carolina: three consecutive starts. If you want to ponder if his illness hampered his early performances – goodness knows a lot of us are drained for several days after having the flu – it’s probably not unreasonable to do so.
In three of his four appearances – Colorado, Vegas and Carolina – Markstrom has allowed a goal on the first shot he faced. But Markstrom was superb in the third period against Carolina on Saturday, making 12 saves to keep the game tied and enabling the Flames to win in overtime.
“It was nice to play in the third,” joked Markstrom after the game. “Until today, I don’t think I’ve really been where I have to be. I’m still not there yet. Right now it’s getting closer and I can feel it, and I think everyone else can see it as well. So it’s on the right path, just got to keep grinding and putting in work.”
Markstrom’s not where he’s been, performance-wise, in other seasons with the Flames. His five-on-five save percentage was .917 in his uneven 2020-21 and .928 in his Vezina-contending 2021-22. He’s at .891 currently.
He’s not as good as he’s been previously, but the team in front of him hasn’t been as sharp as before, either. Scoring chances against (per 60) with him in net have rise from 23.86 to 28.81, and the high-danger chances (per 60) have risen modestly from 9.71 to 9.75. Playing behind a team that’s playing uneven hockey in all three zones and still figuring things out, Markstrom has still back-stopped his club to three wins against some good hockey teams.
Has Markstrom played up to his capabilities? Nope. He’s admitted as much. If Markstrom’s numbers are still on the lower end of the spectrum in a couple weeks, hand-wringing is probably in order. Considering the circumstances he’s been playing under – his absence due to illness and potential after-effects, and a team still smoothing out the rough spots in their defensive performances – he’s definitely earned the benefit of the doubt.
Editorials
Recent articles from Ryan Pike