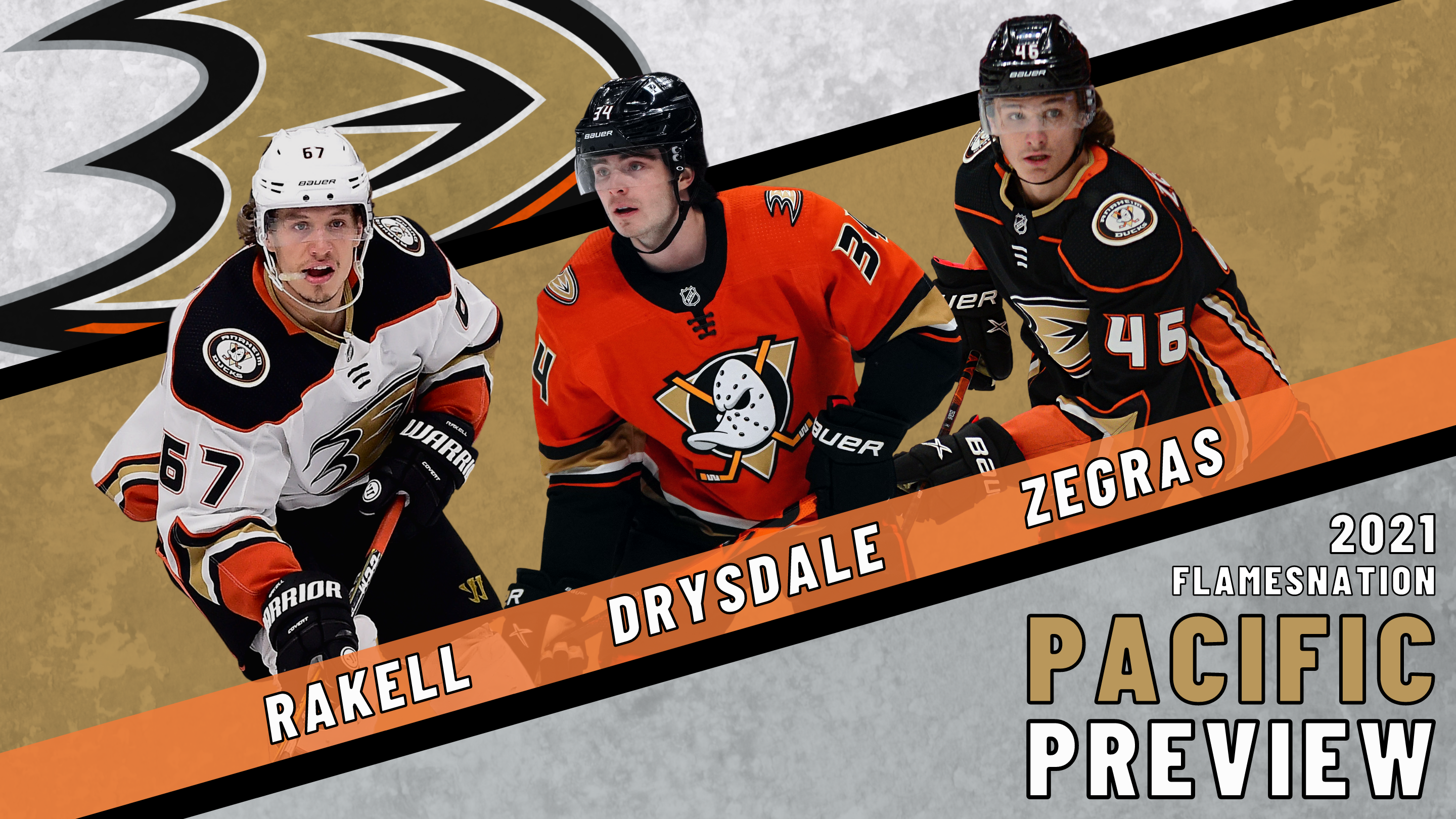 By Ryan Pike
1 year ago
The Calgary Flames are back in the Pacific Division this season. To get everyone reacquainted with the new divisional foes, we’re previewing every team.
For every team, there’s one team or building that absolutely flummoxes them. For the Flames, it’s the Anaheim Ducks and the Honda Center. While the Flames have finally, mercifully, broken their lengthy skid in Orange County, part of that might be because of the transformation of the Ducks into a team that’s just not especially good.

The Ducks had a rough season in 2020-21. They went 17-30-9, put up 43 points, and missed the playoffs in the West Division by 20 points.
If the Ducks had a problem, it’s that they weren’t really ever able to get out of their own way. Calling them “streaky” would be a bit unfair, as they could only ever cobble together losing streaks. They had a few pairs of wins in a row, but they had losing skids of nine, five and four games. They lost in bunches and couldn’t figure out how to eke out close games to break up those big skids.
Two players hit double-digits in goals: Maxime Comtois (16) and Adam Henrique (12). That’s it. Their leading scorer was Comtois, with 33 points. In addition to their problems scoring, they were genuinely not very good at generating offense or suppressing it from the opposition. They were 27th in the NHL in expected goals percentage. They were near the bottom of the league in scoring, defender and goaltending.
It was a long year in Anaheim.

The Ducks’ biggest changes were within their coaching staff. Prior assistant coaches Mark Morrison and Marty Wilford are gone, replaced by veterans Geoff Ward, Newell Brown and Mike Stothers. If nothing else, head coach Dallas Eakins will have some help on his staff moulding the Ducks’ younger players.
But that’s the biggest thing the Ducks did. They lost Haydn Fleury (expansion) and Danton Heinen (not qualified), but brought in such notables as Brogan Rafferty, Danny O’Regan and Greg Pateryn. They largely kept the prior year’s group intact, probably hoping that the maturation of their young players will move the team forward a bit.

If you’re a Ducks follower, it’s easy to get excited about their young players. They have a lot of young players with a ton of promise, a result of some smart drafting. Names like Comtois, Benoit-Olivier Groulx, Troy Terry, Max Jones, Trevor Zegras, Sam Steel, Isac Lundestrom and Jamie Drysdale jump out, while Josh Mahura and Mason McTavish could be pushing for jobs soon, too.
But the problem is this: the youngsters are not there yet, and the bulk of the roster remains solid, if unspectacular, veterans. Names like Adam Henrique, Ryan Getzlaf, Rickard Rakell, Jakub Silfverberg, Cam Fowler, Hampus Lindholm, Josh Manson, Kevin Shattenkirk and John Gibson. The hope is that Anaheim’s exciting young players will force their way onto the scene and supplant these veterans.
But until that happens, the Ducks are a team that’s not particularly great at anything. They have some really interesting pieces, and maybe they’ll become strong hockey players over time, but right now the Ducks are less than the sum of their parts and they didn’t make enough big changes in the off-season to suggest that 2021-22 will be all that different from 2020-21.

These two clubs didn’t meet last season due to the division-only schedules. They lost all three games against Calgary in 2019-20.
Here’s when they’ll meet this season:

Based on the odds from our pals at PointsBet, here’s how the Ducks stack up within the NHL:
It could be a long year in Orange County.
Uncategorized
Recent articles from Ryan Pike