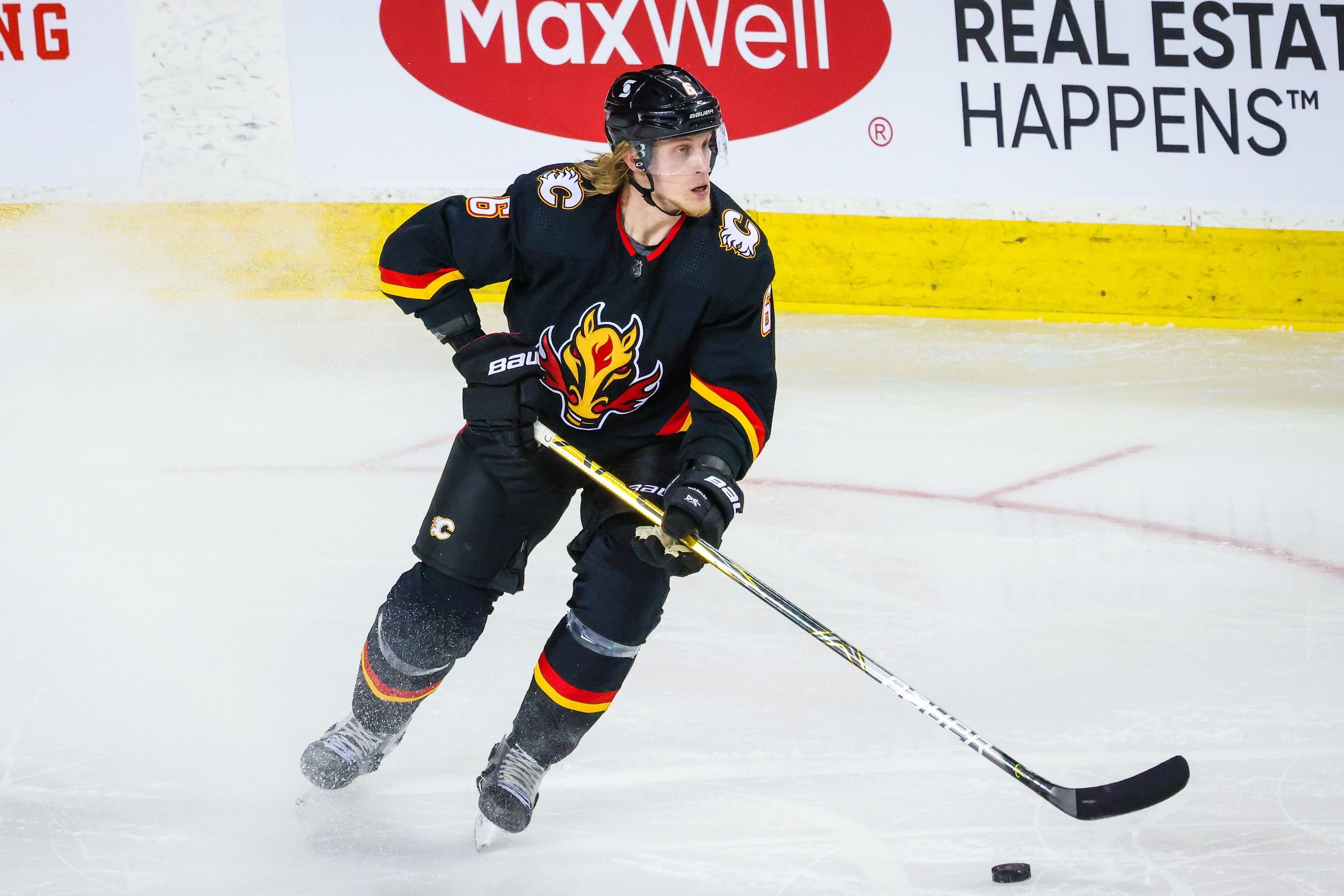 By Ryan Pike
3 months ago
Juuso Valimaki is many things. He’s a left shot defenceman hailing from Nokia, Finland. He’s a player who was very well-regarded by NHL scouts in his draft year, leading to him being a first-round selection (16th overall) in the 2017 NHL Draft.
But despite all of Valimaki’s promise, and most likely due to some ill-timed injuries that took away time and confidence during two crucial development seasons, Valimaki’s a bubble player for the Flames this season. A pretty expensive bubble player. And the Flames are a team that is really low on cap space.
And therein lies the dilemma, friends.
Valimaki just turned 24. He’s played two and a half seasons of pro hockey over four years, missing half of his rookie year with a high ankle sprain and all of his second year with an ACL injury.
Since returning to action, he’s shown flashes of the “old” Valimaki, but he’s also trended towards being a reliable if unspectacular blueliner. Over the past two seasons, Valimaki has 13 points in 58 games with the Flames and 18 points in 35 games with Stockton. The best and worst thing you can say about his game, post-injuries, is that he hasn’t stood out. But you can look at his game and tell yourself “If he got his swagger and confidence back, he could get back close to where he was.” Maybe.
Valimaki is in the final year of a one-way contract that counts for $1.55 million under the salary cap at the NHL level. If he’s in the AHL, he still gets his entire NHL salary, but his cap hit is reduced to $425,000. It’s not a big cap hit necessarily, but it’s not a small one for somebody who’s not on the NHL roster.
As of Friday morning, the Flames had nine defencemen remaining in camp: MacKenzie Weegar, Chris Tanev, Rasmus Andersson, Noah Hanifin, Nikita Zadorov, Nicolas Meloche, Michael Stone, Connor Mackey and Valimaki. Depending on cap complications, the Flames might opt to go with as few defenders on their roster as they can in order to maximize future cap flexibility.
The cap complications surrounding the Flames’ opening roster are this:
So it’s probable that the Flames will have $3.263 million in cap space eaten up by inactive players when the season begins. And that’s not including Valimaki, who would push that total up to $3.688 million.
The cap math suggests the Flames should waive Valimaki – or even explore a trade – because they’re trying to contend this season and an additional $425,000 is valuable (and would be worth around $1.7 million of added salaries at the trade deadline). A look at the cap situations of the other 31 NHL clubs suggests that hardly anybody else has the space to tuck Valimaki away in the AHL, so a claiming team would need to be convinced he’s an NHLer or be willing to live with his growing pains.
But even with the temptation of the cap savings, would the Flames want to lose Valimaki? He’s only 24 and we’ve seen defenders mature at different rates than other skaters; perhaps Valimaki’s development has been stymied by his injuries and is about to catch up. If that happens, the Flames would like it to happen here. And furthermore, the asset management perspective strongly suggests that the Flames probably don’t want to lose a recent first-round selection – and one of the better young players in fairly shallow defensive cupboard – for nothing.
The Flames have some cap challenges, and some tough decisions to make. On Friday’s edition of the DFO Rundown, Daily Faceoff’s Frank Seravalli had this assessment: “Valimaki had a really tough camp. They were not happy with his camp I think… [Connor] Mackey’s the guy they really liked. They thought that he had a good camp.” After discussing Valimaki’s age, injury history and potential, Seravalli noted the possibility that a team claims Valimaki and tries to rejuvenate him.
In an ideal world, the Flames would like to retain both Valimaki and Mackey in their organization. But we might not be in an ideal world, especially regarding their cap situation. The Flames are juggling a lot of things right now, and they probably can’t keep all the players they covet away from the waiver wire while filing a cap complaint roster on Monday.
They will have tough decisions to make between now and the 3 p.m. Monday roster deadline.
Editorials
Recent articles from Ryan Pike