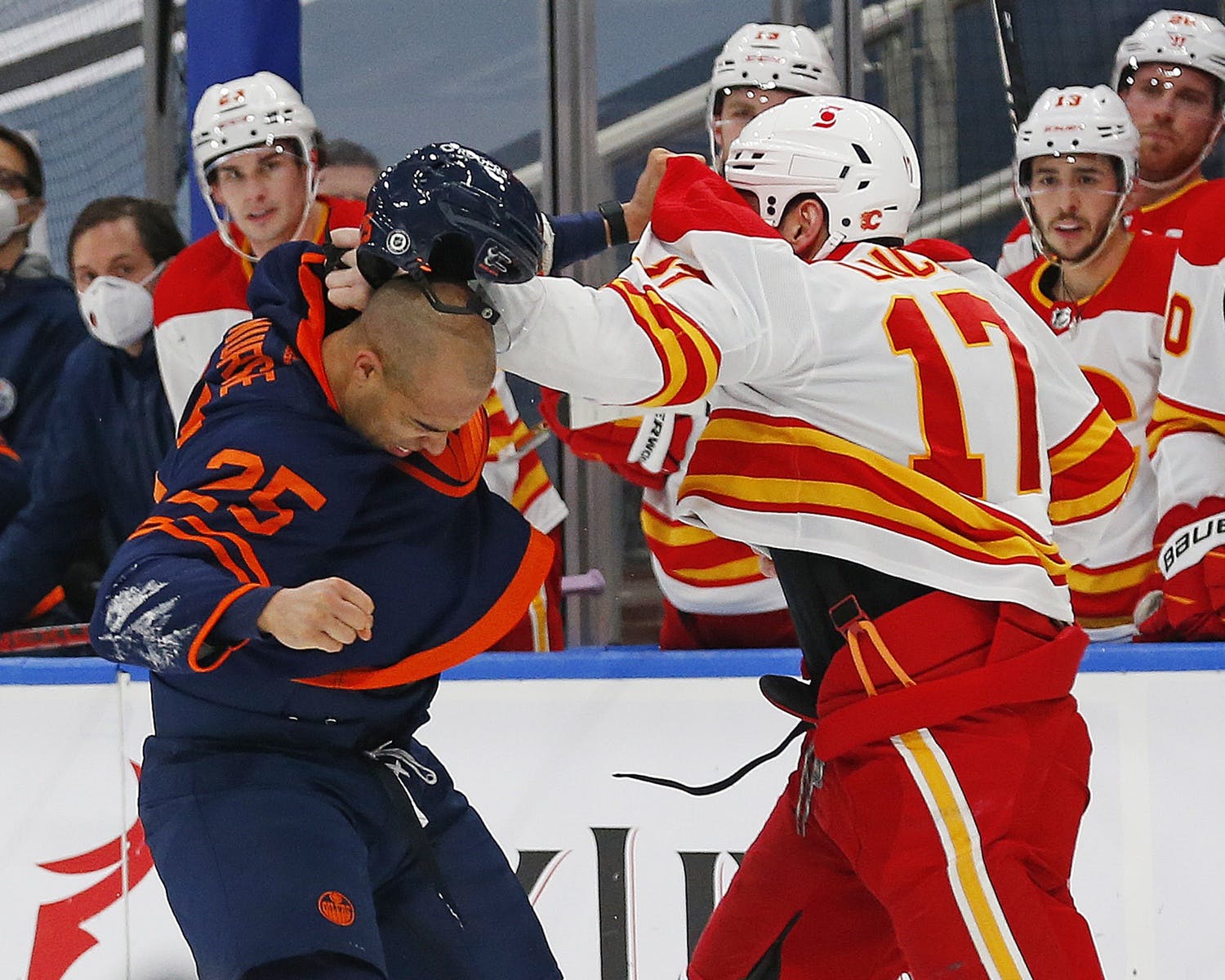 By Ryan Pike
1 year ago
After sweeping Montreal in a pivotal pair of games, the Calgary Flames (13-12-3, 29 points) are back in action as they kick off another huge pair of games against a (Scotia NHL) North Division foe, the Edmonton Oilers (18-12-0, 36 points). The Flames are seven points behind Edmonton with two games in hand, but with regulation wins tonight and Wednesday they could creep within three points of the Oil with two games in hand. (Or they could lose both and be 11 points out.)
No pressure, gentlemen!
The action starts at 7 p.m. MT on Sportsnet West and One and Sportsnet 960 The Fan!
For a view from the other side, check out OilersNation!

Projected lines, via Daily Faceoff:
Tkachuk – Lindholm – Dube
Gaudreau – Monahan – Ritchie
Lucic – Backlund – Mangiapane
Bennett – Ryan – Leivo
Giordano – Andersson
Hanifin – Tanev
Kylington – Valimaki
Jacob Markstrom starts for the Flames, backed up by David Rittich. The projected active extra is Nikita Nesterov, while Joakim Nordstrom remains out with an injury. The taxi squad is Louis Domingue, Michael Stone, Oliver Kylington, Dominik Simon, Zac Rinaldo and Buddy Robinson – Kylington will be activated for the game tonight.
The Flames have been quite good under new/old bench boss Darryl Sutter, playing a structured defensive game and boasting a really fun layered forecheck. They’ve scored five goals and allowed two, with most of their offense coming off turnovers created by forechecking and battling for loose pucks. The Oilers are a scarier team than Montreal, though, so the Flames will need to keep improving their grasp of the Sutter System if they want to earn their third consecutive win.

Projected lines, via Daily Faceoff:
Draisaitl – McDavid – Yamamoto
Ennis – Nugent-Hopkins – Puljujarvi
Shore – Khaira – Neal
Haas – Archibald – Chiasson
Nurse – Barrie
Lagesson – Larsson
K.Russell – Bear
Mike Smith starts for Edmonton, backed up by Mikko Koskinen. Their extras project as Caleb Jones, Dominik Kahun and Patrick Russell. Their taxi squad is Dylan Wells, Theodor Lennstrom, Evan Bouchard and Joakim Nygard, but we’ll see if they rotate anybody – namely Bouchard – back into their lineup.
The Oilers have been super streaky lately. They lost on Saturday to Vancouver, snapping a four game winning streak. Those four games? Calgary, playing with acting coach Ryan Huska, and three against Ottawa. Prior to that, they lost three in a row (to Toronto) and won five (Winnipeg, Calgary twice and Vancouver twice). This is to say: the Oilers are a team that finds a way to let momentum roll for or against them and they could be ripe for another losing skid.
That said: they have Hart Trophy front-runner Connor McDavid playing hockey for them, plus Ryan Nugent-Hopkins and Leon Draisaitl. They’ve got a ton of talent.

If you peruse most standings projections, it becomes apparent that 65 points probably gets you into the playoffs. That’s a 32-23-1 record, or thereabouts, or a .580 points percentage.
The Flames have an 13-12-3 record and 29 points (and a .518 points percentage). To hit 65 points, they need 36 points in their remaining 28 games – the equivalent of a .643 points percentage.

The Flames are without Joakim Nordstrom.
The Oilers are without Alex Stalock, Zack Kassian, Oscar Klefbom and Slater Koekkoek. Kyle Turris is on the COVID-19 unavailable list.