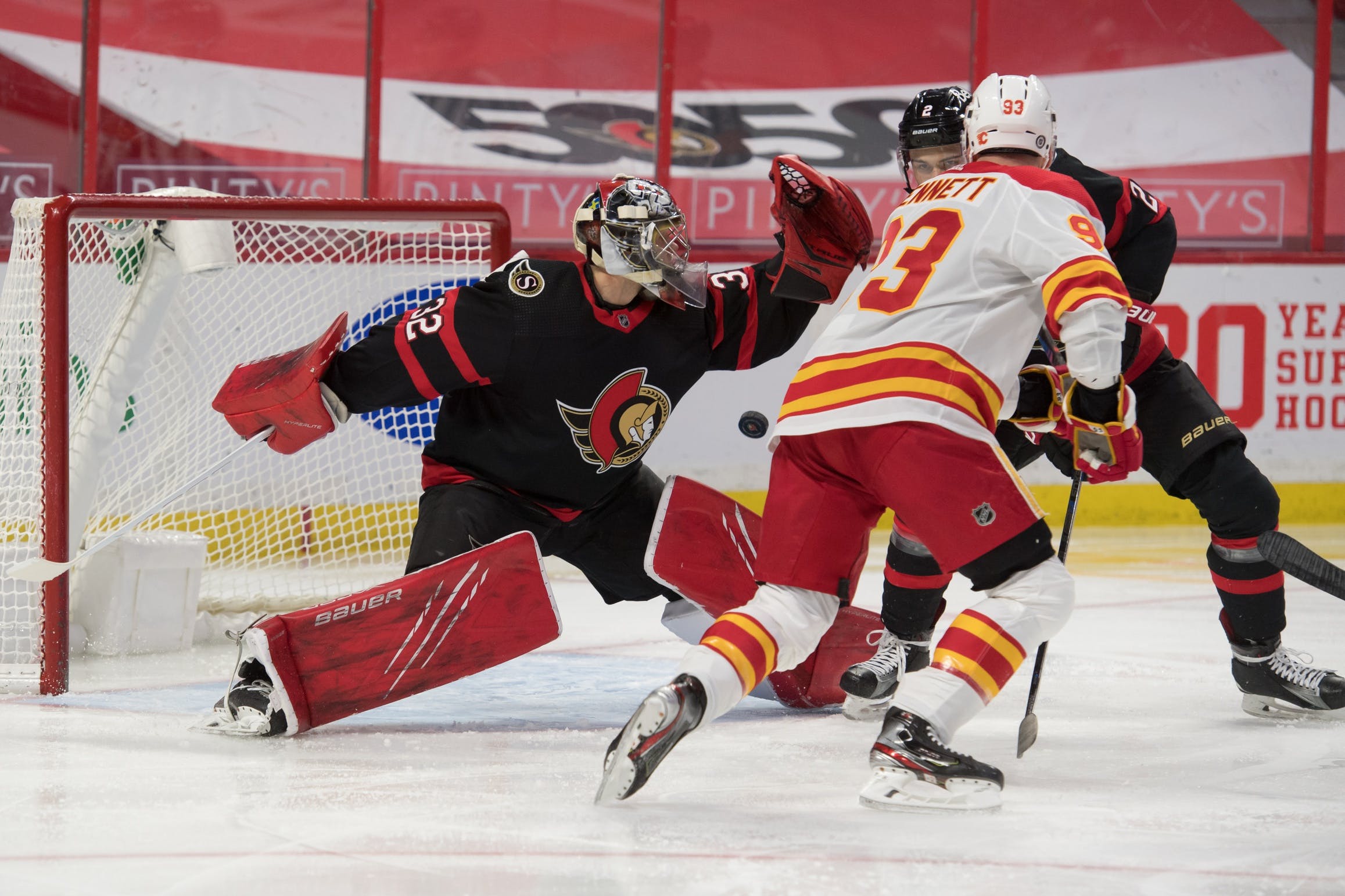 By Ryan Pike
1 year ago
Two days after a disappointing loss to the North Division’s worst team, the Calgary Flames (15-15-3, 33 points) are back at .500 and really hoping to start another run of wins when they play the Ottawa Senators (11-20-3, 25 points) in a strangely-timed afternoon game. (Sportsnet originally had the Edmonton/Montreal game scheduled for 5:30, followed by a San Jose/Los Angeles late game, but then Edmonton’s game got postponed.)
The puck drops just after 3:00 p.m. MT and you can catch the game on Sportsnet West or on Sportsnet 960 The Fan.

Projected lines, via Daily Faceoff:
Tkachuk – Lindholm – Dube
Gaudreau – Monahan – Bennett
Lucic – Backlund – Mangiapane
Rinaldo – Ryan – Leivo
Giordano – Andersson
Hanifin – Tanev
Valimaki – Nesterov
Our expectation right now is no big changes for the Flames, at least based on comments from head coach Darryl Sutter. So Jacob Markstrom probably starts for the Flames, backed up by David Rittich. The expected scratches are Alex Petrovic and the injured Brett Ritchie and Joakim Nordstrom, though Ritchie may be an option. The taxi squad is Artyom Zagidulin, Oliver Kylington, Buddy Robinson and Dominik Simon.
Despite the coaching change, the Flames remain a streaky, Jekyll and Hyde team. They’re either really good – scoring first, leading most of the game and setting the tone with their forecheck and pace – or they’re not – allowing the first goal and chasing the entire game. In seven games under Sutter, the Flames have been quite good four times (never trailing) and quite not good three times (never leading). They need to get some balance if they want to be a playoff team.
And the sand is quickly running low on the hourglass for them to figure everything out this season.

Projected lines, via Daily Faceoff:
Tkachuk – Tierney – C.Brown
Paul – White – Dadonov
Stuetzle – Norris – Batherson
Dzingel – Bishop – Formenton
Chabot – Zaitsev
Reilly – Zub
Wolanin – J.Brown
Filip Gustavsson starts for Ottawa, backed up by Anton Forsberg. Erik Gudbranson is the lone healthy active scratch for the Sens. Their taxi squad is Kevin Mandolese, Vitaly Abramov, Braydon Coburn and Michael Haley.
Ottawa played a really smart game on Monday night. They were starting their fourth-string goalie and missing a bunch of key bodies. (And they lost Austin Watson midway through the game.) But they got a lead, played smart structural hockey and clogged up the middle of the ice. The Flames couldn’t generate very much and Ottawa didn’t make too many mistakes. If the Flames can’t force Ottawa to make mistakes, it could be another long day at the office for Calgary.

If you peruse most standings projections, it becomes apparent that 65 points probably gets you into the playoffs. That’s a 32-23-1 record, or thereabouts, or a .580 points percentage.
The Flames have a 15-15-3 record, 33 points, and a .500 points percentage. They need 32 more points to punch their ticket to the post-season with 23 games remaining, which would translate to a .696 points percentage over the remaining games.

The Flames are without Joakim Nordstrom and Brett Ritchie, though Ritchie may be available today.
The Senators are without Derek Stepan, Marcus Hogberg, Matt Murray, Joey Daccord, Artem Anisimov and Austin Watson.

The Flames are 2-3-1 against the Senators this season through sixgames. After tonight, they’ll meet two more times: Apr. 19 and 20.