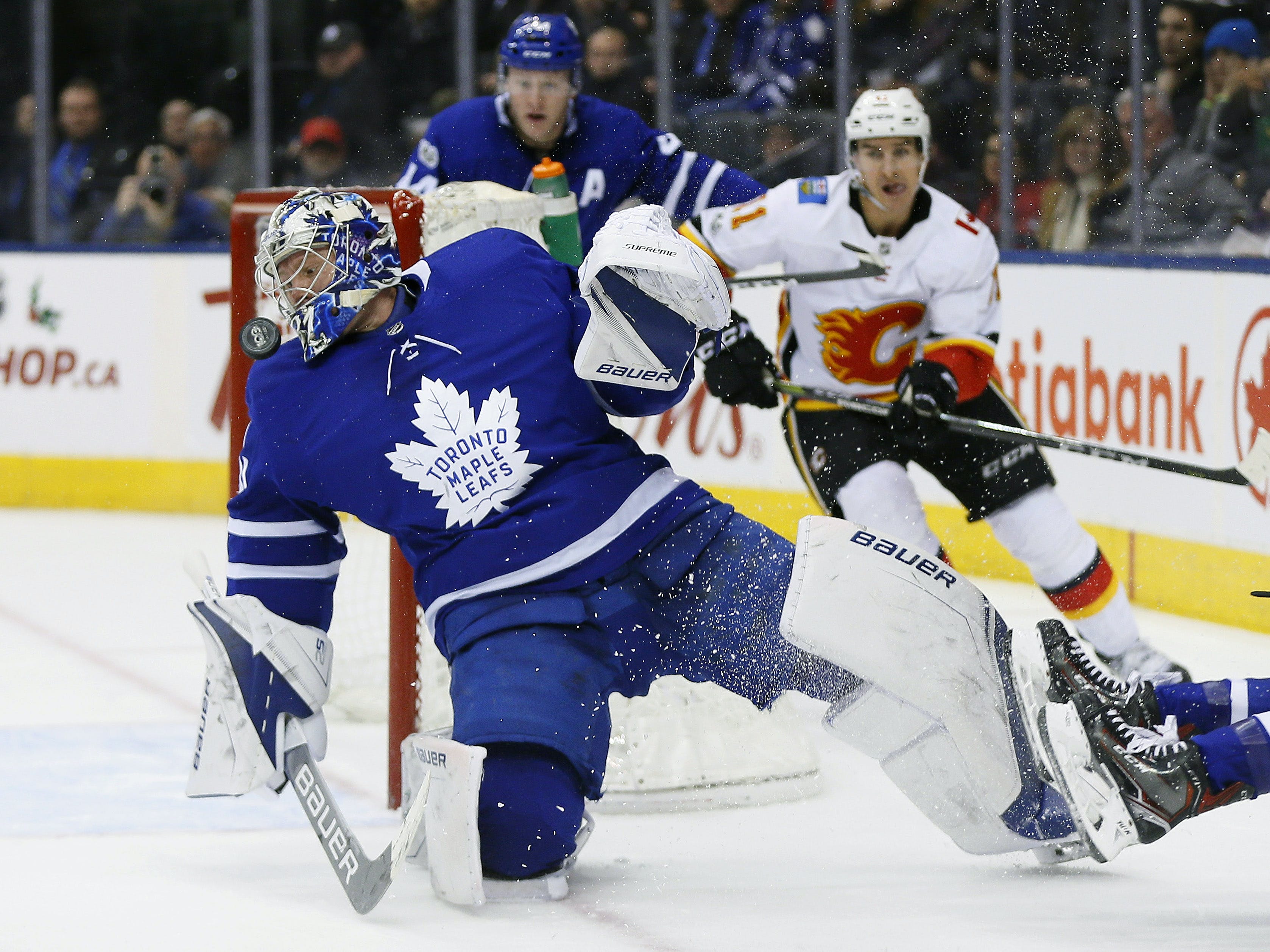 By Ryan Pike
2 years ago
After five days off, the Calgary Flames (2-0-1, 5 points) are back in action. And they’re back in style, hosting a rare home afternoon game against Canada’s most loved/hated team, the Toronto Maple Leafs (4-2-0, 8 points). With the Leafs down some key bodies, can the Flames stash away two key points in the North Division playoff chase?
The puck drops just after 2 p.m. MT and you can catch the action on Sportsnet West or on Sportsnet 960 The Fan.
For a view from the other side, visit the fine folks over at Leafs Nation!

Projected lines, via Daily Faceoff:
Mangiapane – Lindholm – Tkachuk
Gaudreau – Monahan – Simon
Bennett – Backlund – Leivo
Lucic – Ryan – Nordstrom
Giordano – Andersson
Hanifin – Tanev
Valimaki – Nesterov
Jacob Markstrom starts for the third time this season. He’ll be backed up by David Rittich. The taxi squad is Louis Domingue, Connor Mackey, Oliver Kylington, Zac Rinaldo, Derek Ryan and Buddy Robinson, though Ryan is expected to be activated for the game as he has for every game so far. Dillon Dube hasn’t practised since leaving Monday’s game with a lower body injury, so he likely sits out, Joakim Nordstrom slots in, and the lines get a slight shuffle.
The Flames have been off since Monday, and they’ve played the fewest games of any team in the (Scotia NHL) North Division. Heck, Toronto, Edmonton and Vancouver have played twice as many games. The team has basically treated this as an extension of training camp, working on fine-tuning some aspects of their game and making some tweaks here and there.
Starting today, the Flames play four times in the next week: twice with Toronto and twice with Montreal.

Projected lines, via Daily Faceoff:
Hyman – Tavares – Marner
Nylander – Kerfoot – Vesey
Mikheyev – Engvall – Simmonds
Barabanov – Brooks – Spezza
Rielly – Brodie
Muzzin – Holl
Dermott – Bogosian
Coming off a win against the Oilers on Friday, Frederik Andersen starts for Toronto. He’s backed up by Jack Campbell. Auston Matthews missed Friday’s game and is day-to-day, but there’s a chance he plays today. Toronto’s taxi squad is Michael Hutchinson, Rasmus Sandin, Mikko Lehtonen and Joey Anderson. They’ve added Travis Boyd as an extra forward for the trip out west.
Update: Brooks sits, Campbell starts, and both Engvall and Matthews play.
The Leafs are six games in and they’ve played four different teams. Despite their hectic schedule and their variety of opponents, they’ve managed to win once against every team they’ve faced – they picked up Ls against Ottawa and Edmonton but split those two game sets. Give the Leafs some credit: they’re a deeper team than they were a year ago, even with the injuries hobbling them lately.
The Flames will need to play a complete 60 minutes if they want to pick up an afternoon win today.

If you peruse most standings projections, it becomes apparent that 65 points probably gets you into the playoffs. That’s a 32-23-1 record, or thereabouts, or a .580 points percentage.
The Flames have a 2-0-1 record, five points, and an .833 points percentage. They need 60 more points to punch their ticket to the post-season.

The Flames beat Toronto twice last season. Their last meeting was a 2-1 shootout win in Toronto over a full year ago (Jan. 16, 2020).