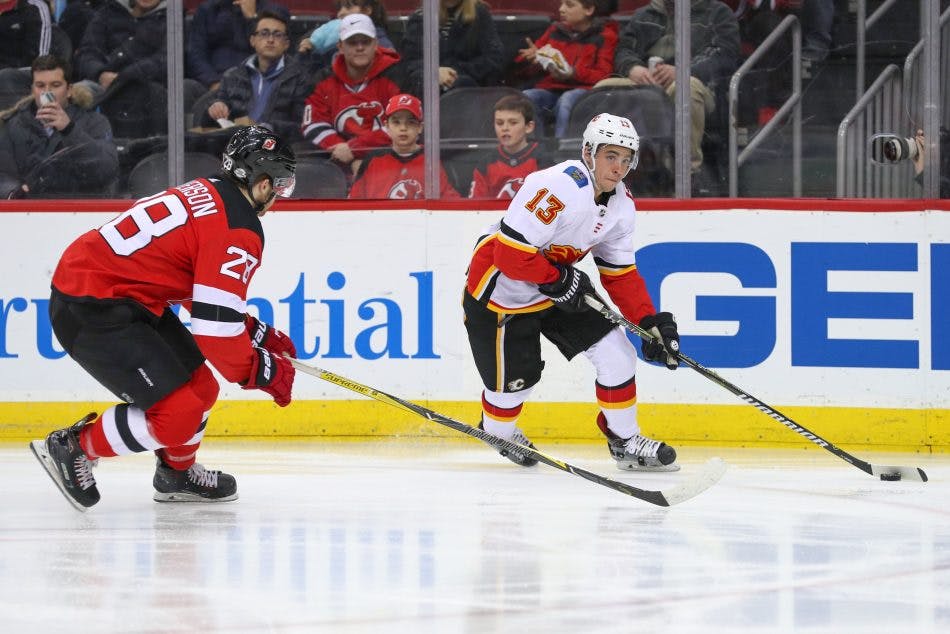 By Ryan Pike
1 year ago
The day after an emphatic win over the New York Rangers, the Calgary Flames (3-1-1, 7 points) are back in action for their first back-to-back set of the season. Tonight’s opponents are just across the Hudson River from the Rangers, in the form of the New Jersey Devils (3-1-0, 6 points). Can the Flames keep chugging along on their very productive eastern road swing?
The puck drops just after 5 p.m. MT and you can catch the action on television via Sportsnet One (with Rick Ball and Kelly Hrudey) or on radio via Sportsnet 960 The Fan (with Derek Wills and Peter Loubardias).

Yesterday’s lines via Daily Faceoff:
Gaudreau – Lindholm – Tkachuk
Mangiapane – Dube – Ritchie
Coleman – Backlund – Pitlick
Lucic – Monahan – Lewis
Hanifin – Andersson
Kylington – Tanev
Välimäki – Gudbranson
Based on the back-to-back situation, we’re presuming that Dan Vladar starts given Jacob Markström played last night against the Rangers. The extras yesterday were Michael Stone, Nikita Zadorov and Brad Richardson, so possibly one or more of them could rotate in.
This is the second half of the first of 14 back-to-back sets for the Flames this season. They’re facing a rested New Jersey club, so the key to success may be playing simple, smart, structured hockey. Thus far, they’ve managed to play well for the first and third periods but have suffered from some uneven second periods as they adjusted to the home side’s push.
The key offensive players to watch for the Flames remain Johnny Gaudreau, Elias Lindholm and Andrew Mangiapane. To describe those three gentlemen in two words: they good.

Projected lines via Daily Faceoff:
Kuokkanen – Hischier – Sharangovich
Tatar – Mercer – Zacha
Johnsson – McLeod – Bratt
Vesey – Gauthier – Geertsen
Smith – Hamilton
Siegenthaler – Subban
Graves – Severson
Nico Daws is coming off a win in his first NHL start and it seems probable that he’ll start, backed up by Scott Wedgewood. Their extras are Christian Jaros and Marian Studenic.
The Devils are off to a good start, albeit one riddled with injuries early on. They’ve had a favourable schedule, though, filled with teams playing on the back half of back-to-backs.

The Flames are now fully healthy.
The Devils are without Jonathan Bernier, Miles Wood, Scott Wedgewood and Jack Hughes due to injury.

The Flames beat New Jersey in the Saddledome back in November 2019. The last time they played in New Jersey was in February 2019 (also a Flames win).