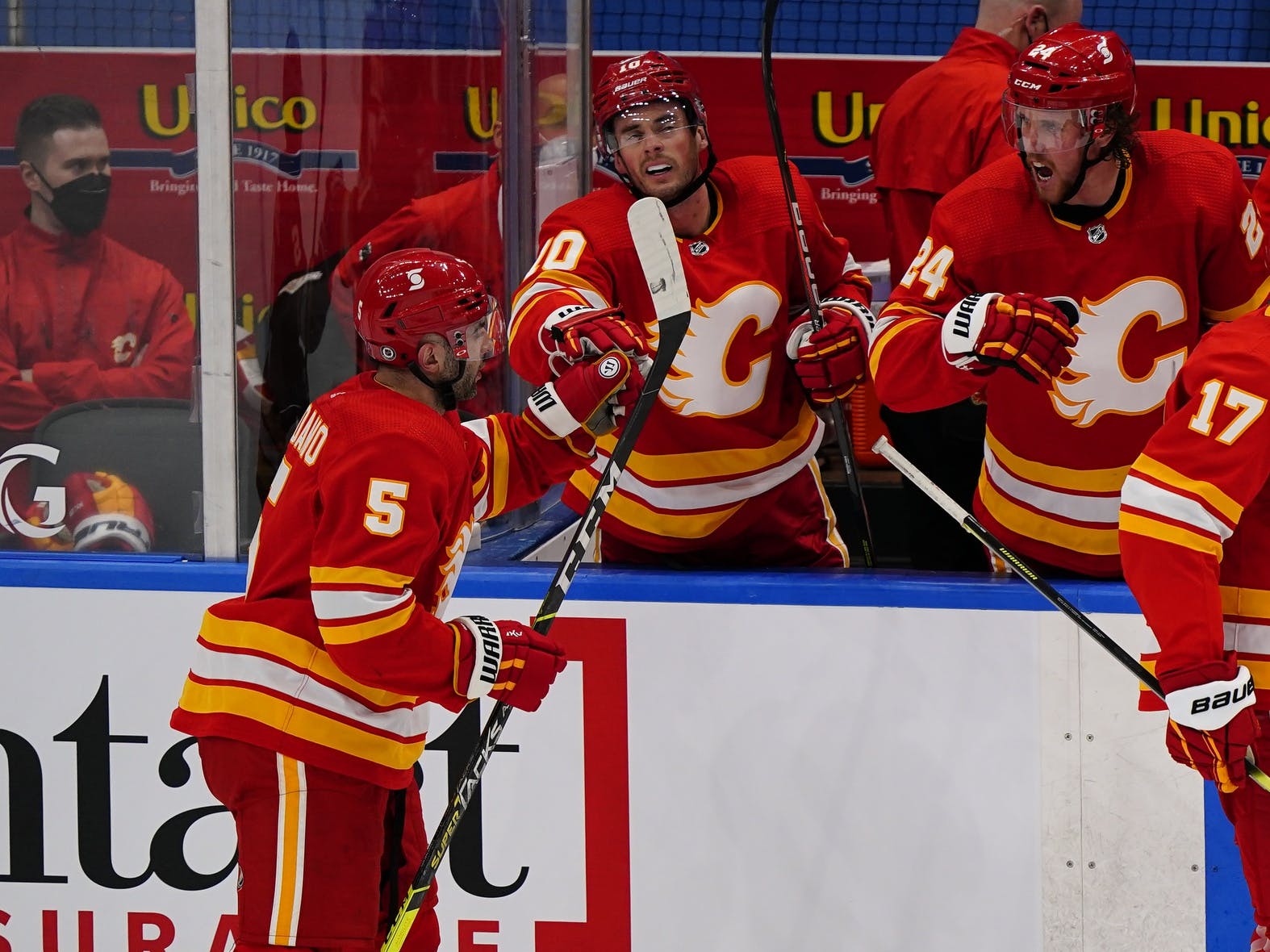 By Mike W
1 year ago
After each and every game the Calgary Flames play, we all wrack our brains and try to come up with some articulate lesson we can garner from the 60+ minutes we just watched.
Is it burn the tape? Learn from mistakes? Learn from successes? What’s the lesson? The lesson is, Darryl Sutter doesn’t have time for lessons and pontifications on previous games.
When asked about the Flames win in response to 7-3 drubbing at the hands of the greasy Oilers on Wednesday, Darryl’s response? “What was Wednesday, again?”
Despite getting soundly outplayed and out chanced by Toronto all night, the team focus is likely on the next one. What was Friday, again? That’s likely the attitude heading into the rematch.

A pretty big yikes from the Flames in terms of overall play. I’m sure everyone from the mecca of the hockey world has already informed you but if you missed it: the Leafs mostly owned that game from start to finish. (Moneypuck)
However, the Flames were able to keep the game under a degree of control. Controlled chaos perhaps? I think most encouraging from a Flames perspective was the fact they were able to hold on and were able to battle. We’ve seen this group crumble at the slightest of adversity many times previous.
(5v5 Data from Natural Stat Trick)
While a strong forecheck early got the Flames on the board the circus of errors in terms of puck management carried over. If you thought the five defensive zone giveaways against the Oilers were bad, the Flames outdid themselves last night with thirteen.
(Data from MoneyPuck)
They escaped period one despite allowing eight high danger chances while generating zero (although the Ryan goal was as close as you can get to being high danger without officially being logged as such).
Thank you, Mr. Markstrom.
The Leafs came in waves and by the time it was 3-3 it felt inevitable that they good guys in red would succumb to the relentless pressure. But this time, they didn’t. They held it together. The captain scored and the star goalie made a massive save.
They still missed the empty net though…again. I’m not going to lie and say I wasn’t certain the Leafs would score after Ritchie missed the yawning cage.
Thing you cannot do next game, however: allow Marner and Matthews to combine for 6 high danger chances at 5v5. That will kill you 99/100.

(Data from MoneyPuck)
Holy Mackinaw peaches the Flames top two lines get beat down last night 5v5. This has to trigger an adjustment up front, no?

A busy, eventful, and tough night of work for everyone on the blueline.
(5v5 Data from MoneyPuck)

Listen, I know people like to pile on Johnny Gaudreau but seriously how can this guy be expected to play a forecheck based brand of hockey when he’s out there dragging Monahan around, who doesn’t skate well or retrieve pucks, and a fringe NHLer, who doesn’t skate well or retrieve pucks? In the simplest terms: Johnny is fast. His game is fast. His line mates are way too slow.
It’s pretty much 1v3 when Gaudreau gets the puck in the offensive zone. Obviously he needs to be better and I think it is obvious the new coach is pushing him to be better in different areas. And, I realize Darryl is molding this group to work on team defence as a priority.
Sure, they don’t have the firepower of the Oilers and Leafs and maybe not even enough to go toe to toe with the Jets. But they still need to score goals! Weighing down your best player, the only player who is even in the same stratosphere of the aforementioned skaters in terms of offensive talent, so far underwater is creating a problem.
You need him doing what he does best: creating offence at an elite level. Maybe you get by for a little while on secondary scoring but you need goals. Your best engineer of those goals is 13. He can’t be stuck in his own end all night or dumping pucks that go un-retrieved or setting Brett Ritchie up in the slot and having him whiff.
I’ve long been adamant the team should finally try splitting he and Monahan but if they are hell bent on keeping them together then at least give them Leivo or Dube or Mangiapane. Heck, call up Matt Phillips. At the very least, someone with some speed and some skill, and the ability to keep up.
Also, I’m failing to see how playing your best player 14 minutes (behind guys like Lucic) and less than two minutes TOI on the powerplay (again, behind Lucic) is the answer.
It’s not like the Lindholm unit is lighting it up at even strength, anyways.
In fact, the current iterations of the top two lines are the two worst amongst all line combinations that have spent 50 or more minutes together in terms of quality shot share.
(2021 5v5 Score and Venue Adjusted Data from Evolving Hockey)
The ‘top’ two lines are getting routinely caved in. And while the Lindholm unit has been improved under Sutter the Monahan unit has only gotten worse. 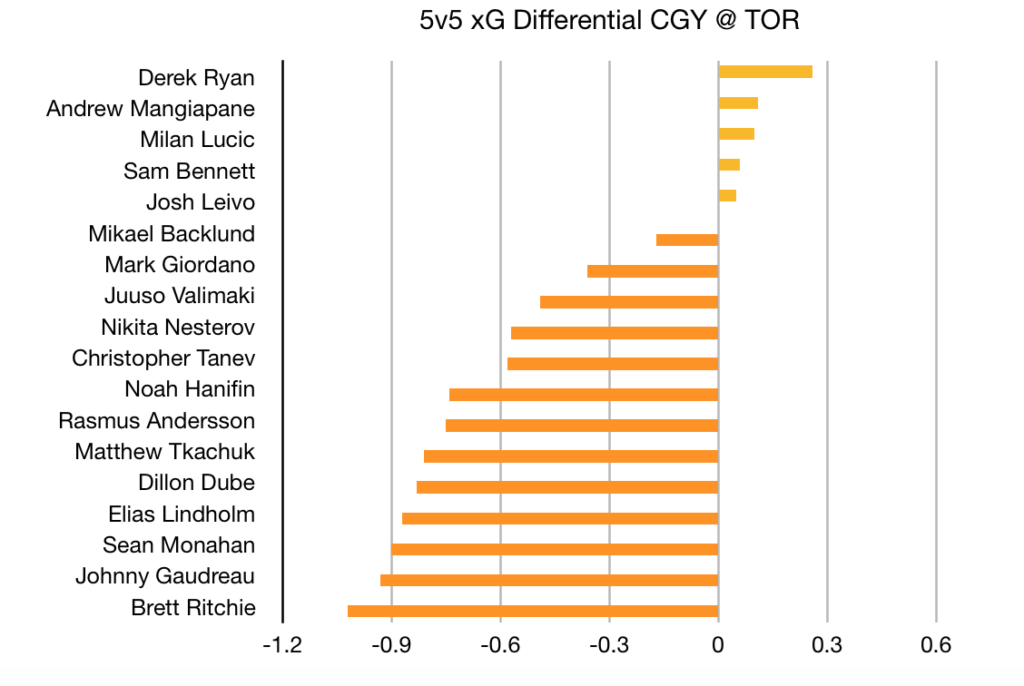 We all raised an eyebrow when 25 was confirmed as the starter but the choice paid off. This wasn’t a 2-0 shut out against Montreal where he single handedly won the game but he was one of the best players on the ice last night.
The words “Markstrom needs to be huge here” had barely left my mouth when he made that incredible diving save on the best shooter to ever play ice hockey (or so Leafs Nation tells me).
That was an almost Kiprusoffian response to getting shelled the game prior.

A quick word on Sean Monahan, who apparently kills penalties now? I legitimately had to do a double take when I saw 23 out there on the late kill.
Sutter is certainly not backing off in terms of feeding Monahan and Gaudreau to the wolves. We’ve seen guys like Geoff Ward try to play 23 in tougher spots to middling success. The bench boss is certainly throwing Monahan into the pressure cooker as he’s been matched up against strong competition, deployed in the defensive zone, and now we’ve seen him on the penalty kill.

I didn’t like the Holl hit. Maybe it wasn’t dirty but it certainly warranted a boarding call. Gaudreau was in a vulnerable spot and was thrown violently in the boards…is that not boarding? I loved both Valimaki and Tkachuk’s response. Should Tkachuk be taking himself out of a tight game for 5 minutes? Probably not. I still loved it.
The friendship tour continues.

Derek Ryan was strong again. A sweet snipe, 76.18 xGF%, 60.00 CF%, and one of the few guys who didn’t get caved in on the ice.
Two points is two points. The Flames have to and likely will be better tonight.
Uncategorized
Recent articles from Mike W