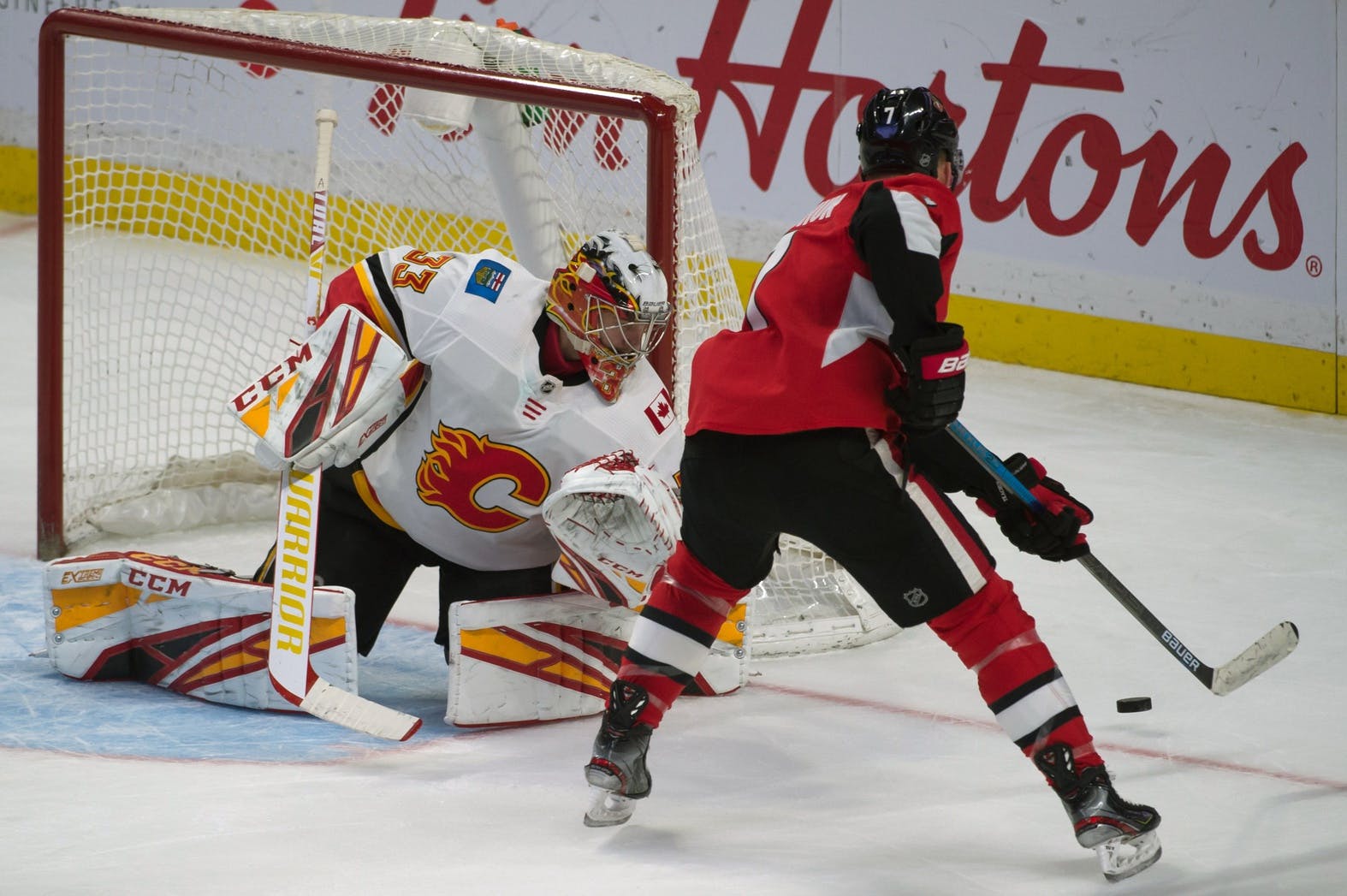 By Prajeya Parmar
1 year ago
Coming into Saturday’s matinee, the Calgary Flames had six goals in their last eight outings, which included a horrific 5-1, 7-1, and 6-1 shell-shacking from the Canucks, Oilers, and Senators respectively. The reintroduction of the Gaudreau-Monahan-Lindholm line led to a 6-3 performance against Ottawa, almost matching the Flames goal total from the aforementioned time-frame, and has given the Flames a .500 record once again. Some things should truly never change.

(Calgary Flames 5v5 metrics, via Natural Stat Trick)
The Flames absolutely dominated in the first two periods of the hockey game, scoring three goals in each one, maintaining the majority of possession as well. Rather than continue to press, Calgary decided to sit back in the third period, fully aware of the comeback pedigree that the Senators possess. All in all, the Flames out-chanced the scrappy Senators, 19-16, a drastic improvement over their 18-25 efforts just a couple days back.

(From Natural Stat Trick)
Another big change from their first matchup against the Senators was Calgary’s ability get more high-danger scoring chances. As Mike W alluded to earlier this week, their 6-1 loss earlier this week saw Calgary resorting to perimeter play, due to their inability to penetrate Ottawa’s stalwart defensive efforts. Today’s game was a different story entirely, with all Flames goals, aside from Matthew Tkachuk’s, stemming from a set play in the slot. That’s not to say that the D weren’t active tonight, with Giordano, Nesterov, and Välimäki all having three shots on net tonight.

In this section, I’ll be talking about some random, and not so random, takeaways I had from today’s game.
The Gaudreau-Monahan-Lindholm line is back! Starting right from where they left off, the trio combined for four points in total. Nothing crazy, I’ll admit, but it was refreshing to see the former top line bounce back and play well. With Elias moving back to the wing, Mikael Backlund was tasked with the responsibility of moving up the lineup. Playing 20:49 minutes of all-strengths hockey, four more than his season average, Backlund ended an eight-game point drought with one goal and two assists. The Swedish centerman was relied on heavily tonight, particularly on the penalty-kill, and was a big part of the Flames win.
Another player that moved back to the middle was 18-Year-Old Sam Bennett (now 24). While he didn’t get on the scoresheet tonight, Bennett was incredibly effective in the face-off dot. Winning 71.43% of his draws (10/14), the 24-year-old player led all players on the ice in this regard (minimum 5 face-offs taken). Cassie Campbell mentioned that Bennett has the potential to blossom into a wonderful third-line centre, and while that’s a far cry from what can be assumed from his draft pedigree, its still a component that all cup contending teams require.
I’ve been a big fan of Nesterov’s game, thus far. He’s a volume shooter with an absolute canon, leaving me fairly surprised as to why he doesn’t have a point yet this year. Nesterov had a great game today, generating scoring chances in the offensive zone, while also making crucial recoveries in his own end, and has overall been great for Välimäki’s development.

I’m sure you’ve caught on, but if you haven’t, in this section I’ll be mentioning some of the lesser lights from today’s game.
As everyone expected, I’ll be starting off with the penalty kill. Having your penalty kill unit go 3/6 against the NHL’s 25th ranked power play is not a recipe for success. If this game went anything like the past eight, Calgary would have lost based on their poor PK performance alone. Screening your own goalie and leaving the other teams best forward open goes against PK 101, and it’s something Ward and Co. will need to clean up. Giving up six power play opportunities on its own is also quite troubling, and something thats quite unsustainable given the offensive firepower in this years North Division.

It would’ve been inexcusable for the Calgary Flames to put forth anything other than a strong effort tonight. Not only did they deliver, but they (hopefully) broke the scoring dam as well. While the game certainly wasn’t perfect, the team has the work-ethic, and talent to build off their great showing today.
Uncategorized
Recent articles from Prajeya Parmar