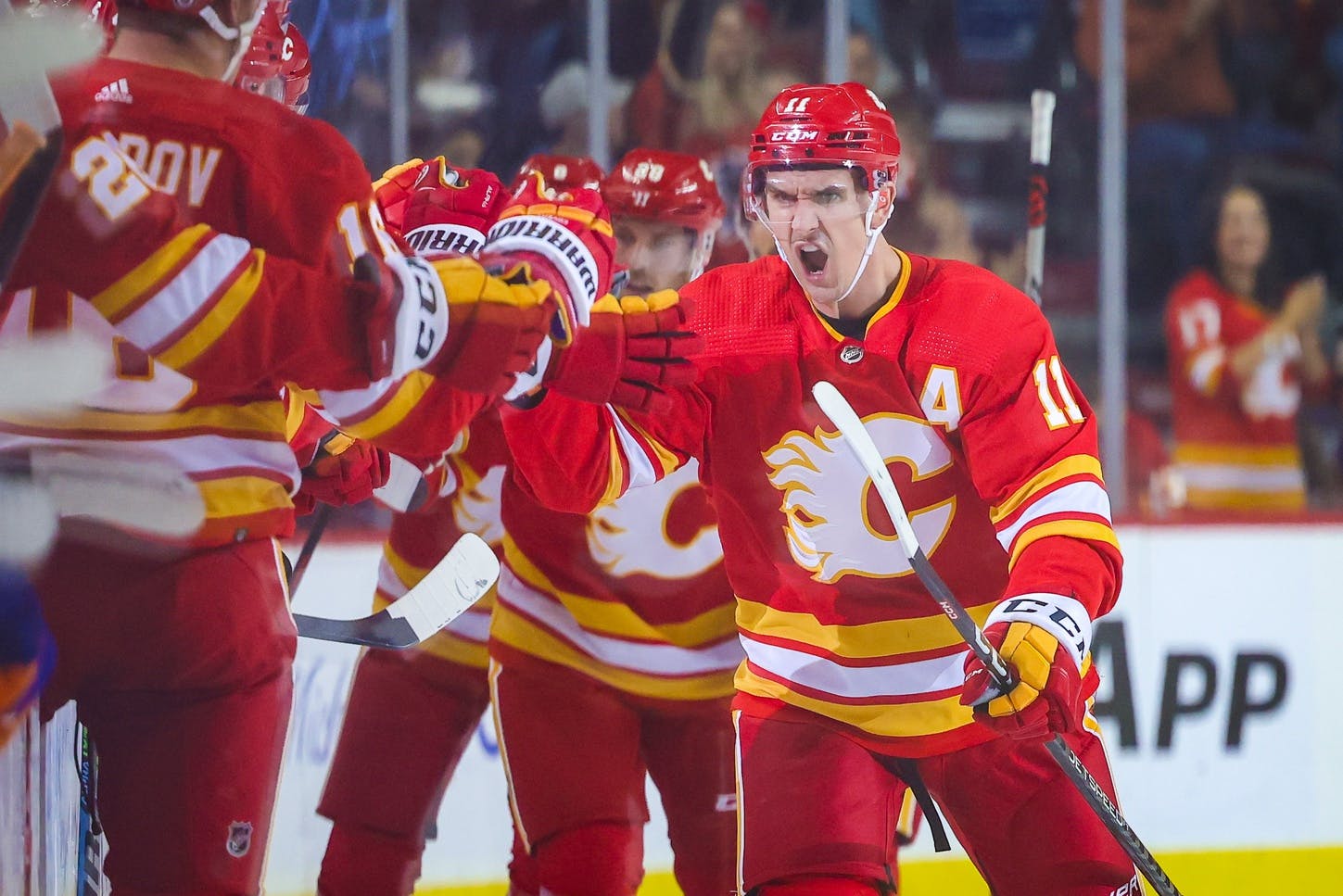 By Ryan Pike
2 months ago
The Calgary Flames played a pretty good game on Saturday night against the Edmonton Oilers. They had the lead, twice, and their play in their own zone was generally tidier than it’s been all season.
But “pretty good” sometimes isn’t good enough when you’re playing against Connor McDavid.
“Connor McDavid was the difference in the game,” summarized Flames head coach Darryl Sutter following a 3-2 loss to the Oilers.
McDavid had three primary points: the first assist on Zach Hyman’s pass that deflected in off Noah Hanifin on a second period power play, the game-tying goal in the third period, and the first assist on Hyman’s game-winner later that period.
The odd thing was that the Flames, numbers-wise, seemed to play McDavid reasonably well. With McDavid on the ice at five-on-five, the Oilers controlled just 38.7% of shot attempts, 35.3% of shots, 41.2% of scoring chances, 25% of high-danger scoring chances and 33.6% of expected goals (via Natural Stat Trick). But the Oilers out-scored the Flames 2-1 with McDavid on the ice at five-on-five because, well, they executed better than the Flames did with the puck.
All four Flames forward lines out-shot Edmonton. Only Mikael Backlund’s line allowed more scoring chances or high-danger chances than they generated. The other three forward lines were well ahead of their Oilers’ counterparts in every possession and dangerous possession metric.
But the Flames’ top line of Jonathan Huberdeau, Tyler Toffoli and Elias Lindholm generated chances, but no goals. (Following the game, Sutter noted of the top line: “You’ve got to score that third goal, at some point.”)
The Flames looked more like their usual selves at five-on-five against Edmonton. Their breakouts had structure and crispness. They did a good job of negating scoring chances and minimized dangerous odd-man opportunities. Heck, high-danger chances were 14-7 Flames overall.
The goals they allowed were a power play passing sequence deflected into their own net after a great shorthanded chance, a weird dump-in recovered by the best player in the world with the goalie out of position, and some bad execution by the defenders on the game-winner.
“Defencemen have to make firmer plays with the puck,” said Sutter of the third goal. “It wasn’t a confrontation, we passed the puck twice below our goal line. Soft plays.”
If the Flames play like they did on Saturday night for the remainder of the season, they’re going to win quite a few hockey games. They did a lot of good things and executed fairly well in all three zones.
Unfortunately, when you’re playing against Connor McDavid, executing fairly well sometimes doesn’t cut it.
The Flames are back in action on Tuesday night when they host Seattle.
Editorials
Recent articles from Ryan Pike