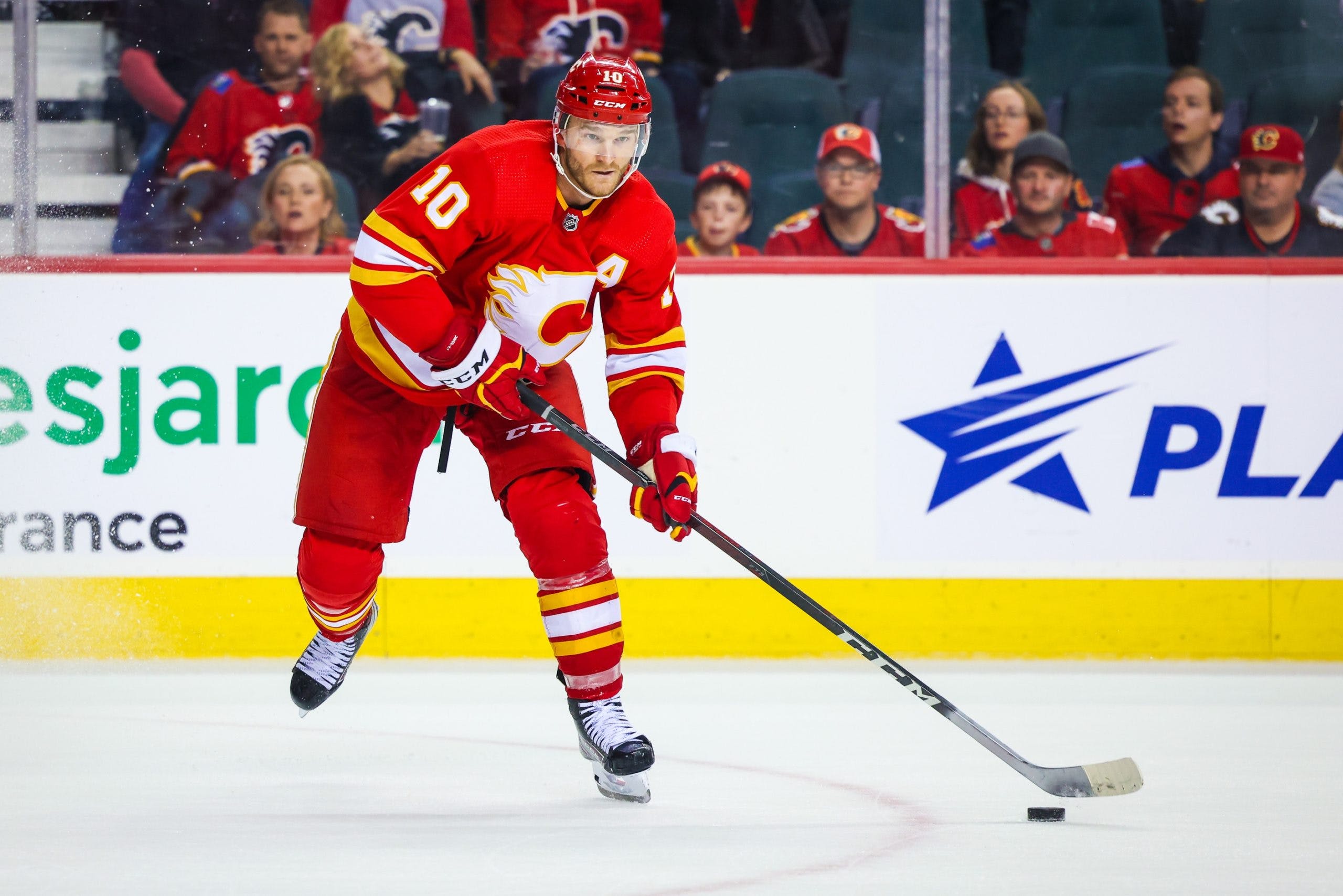 By Ryan Pike
2 months ago
Welcome to our game day content brought to you by NHL betting site Betway!
Just under 24 hours after their loss in Washington, the Calgary Flames (9-8-3, 21 points) are back in action and they will complete their lengthy six game road trek with a matinee against the Carolina Hurricanes (10-6-5, 25 points). The Flames were shut out on Friday afternoon, while the Hurricanes lost in overtime to Boston. Which team can bounce back and get two points?
The broadcast begins at 2 p.m. MT on Sportsnet West and Sportsnet 960 The Fan!

Projected lines courtesy Daily Faceoff:
Huberdeau – Lindholm – Toffoli
Dube – Kadri – Mangiapane
Coleman – Backlund – Lewis
Lucic – Ruzicka – Ritchie
Hanifin – Andersson
Zadorov – Weegar
Gilbert – Tanev
It’s a back-to-back and a matinee, so there’s definitely no morning skate. But since Jacob Markstrom started in Washington, Dan Vladar probably starts against Carolina. Probably. Connor Mackey and Kevin Rooney were Friday’s scratches and Darryl Sutter tends to keep things consistent, but with all the line shuffling we’ll see if he doesn’t shuffle things up here, too. Michael Stone is on the trip but remains on the injury reserve, but he could be activated without the Flames needing to make another move to facilitate it. In short: we’ll see what we see from warm-ups.
The Flames have done a lot of good things on this road trip, and throughout this season. Their game lacks consistency at times, especially in terms of puck management, but in general they’re a solid hockey team who play a smart, structured game in all three zones. They seem to lack killer instinct in the offensive zone, though, and they just can’t consistently get to the high-rent district and convert zone time and perimeter chances into screens, tips and rebound goals.
The difference between being a pretty good team and being a strong playoff team is figuring that last part out.

Projected lines courtesy Daily Faceoff:
Martinook – Aho – Necas
Svechnikov – Kotkaniemi – Fast
Drury – Staal – Jarvis
Noesen – Stastny – Stepan
Slavin – Burns
Skjei – Pesce
de Haan – Chatfield
Since Pyotr Kochetkov started in Boston on Friday, likely Antti Raanta starts against Calgary. Friday’s extra for the ‘Canes was Dylan Coghlan.
On one hand, the Hurricanes are winless in their past five outings. On the other hand, they’re gotten to overtime in four of those five games. They’re a scrappy team. They’re missing a bunch of big pieces, but they have a knack for hanging in games and making life really difficult for their opposition.
This is the rare occasion where both teams are on the back half of a back-to-back (and even both playing their third game in four days, including a pair of matinees). Carolina’s exactly as fresh as the Flames are.

The Flames are without Oliver Kylington, Michael Stone and Brett Ritchie.
The Hurricanes are without Jake Gardiner, Max Pacioretty, Ondrej Kase, Frederik Andersen and Teuvo Teravainen.

This is the second and final meeting between these teams this season. The Flames beat Carolina by a 3-2 score in overtime back in October.